A span of horses, in themselves an excitement, drew us and our guests to the Half Way House. From there we had our choice of walking up the road encircling the mountain to the summit, or of being pulled up the incline of the wooden funicular, or even climbing the 522 steps of the long stairway that paralleled the track. The floor of the old Prospect House, at the top, was smooth for dancing, and between dances we might have the rare privilege of taking the Claude Lorraine [telescope] from its locked security and looking into it to see the meadow's patchwork of colors, below, like a pattern in a real kaleidoscope – evenly cut fields of wheat, rye, and barley, and peaceful farmhouses, and the river winding to the Ox-bow.

Does anybody know where one could find photos of the cable car and hotel?
Photos of cable car?

Try this website, which just recently went up: http://www.chronos-historical.org/mtholyoke/index.html There's more historical information, as well as photos, of Mt. Holyoke through the years.
Mt Holyoke On-line: Visit the Historical Timeline

I originally developed this timeline for the Friends Of The Mt. Holyoke Range. It can now be found at: www.chronos-historical.org/mtholyoke/ I was under the impression there was to be a link to my site when this segment went up.
Mt Holyoke On-line: Visit the Historical Timeline

I included your URL in a reply to an earlier forum post. This was not as prominent as either of us expected, so I've added it to the 'links' section of the moment. My apologies for the confusion. - Zack
Mt Holyoke On-line: Visit the Historical Timeline

Thanks Zach... I'd hate to think I bought the extra bandwidth for naught.
Brothel

I was once told that the Summit House was once used as a brothel. I was wondering if there is any truth to this??
Brothel

If it were a brothel, my grandmother would never have been proud to have been a guest. She talked about how grand a place it was, she attended Cushing Academy in Ashburnham MA My grandfater, later to be her husband, from Enfield NH, also visit the site, as he was in the chorus from Tufts & sang at Mt Holyoke College. I have a postcard of the summit House, mailed to my grandfather, posted 8-24-1910, from a friend, signing only his initials ------------------------- Rosie

That would be Massachusetts Senator Charles Sumner (not Summer)
https://en.wikipedia.org/wiki/Charles_Sumner

You are correct. Thank you for pointing out that typo!
Login

On this day in 1965, Massachusetts officials burned what was left of the wooden tramway that had carried thousands of people to the summit of Mt. Holyoke. Abandoned for decades, the deteriorating tramway was a safety hazard. But for 75 years, it was an unforgettable part of the experience of visiting Mt. Holyoke. As early as the 1830s, the mountain-top in Hadley was a popular destination for artists, writers, students, and ordinary sightseers. A series of ever-bigger hotels was built there. Then, in the 1920s and 30s, the car changed the way New Englanders spent their leisure time. By 1940, the hotel was closed; the land was donated to the Commonwealth for use as a state park.

In its heyday, the hotel at the summit of Mt. Holyoke had many famous guests. 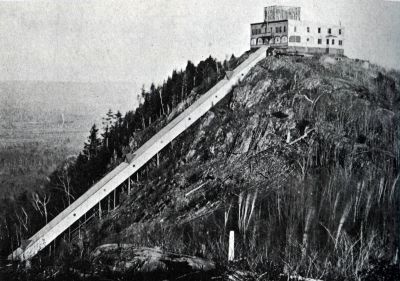 State officials' decision in 1965 to burn what was left of the Mt. Holyoke cable railway marked the end of an era. Once an innovative means of transporting tourists to the summit of one of the region's best-known peaks, the tram had become a safety hazard in a popular state park.

The first Massachusetts mountain to be developed as a resort was Mt. Holyoke in Hadley. In 1821 Willis Pease bought nine acres near the summit for $27. He built a hut and advertised in the local paper that he had made arrangements for the public on the summit of Mt. Holyoke. Visitors were promised spirits, rum, cognac, gin, rum, wines — at a price twice what was charged in the valley — "Spanish segars," and other refreshments. Pease sold the land three years later for $600 —far more than local farmers thought it was worth; the land was sold again in 1826, this time for $1,500.

Willis Pease and the other early developers of the summit site were seeking to capitalize on the growing number of people whose idea of a pleasant outing was a mountain climb. From the summit of Mt. Holyoke, they beheld a landscape of dense woods, rugged hills, tidy towns, and fertile farmland stretching along the Connecticut River.

Moving at a 38-degree angle, riders had the sensation of being pulled almost straight up. 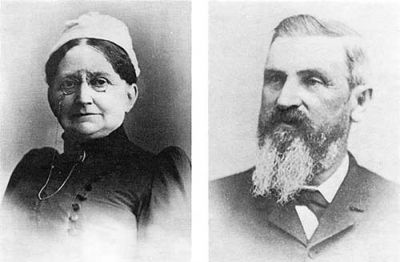 By the 1840s, there was an alternative to hiking. In 1846, a carriage road was built up the western slope. In 1849 newlyweds John and Fanny French visited the summit. Confident of its commercial potential, they bought the property and began constructing a two-story, eight-room hotel. When it opened on July 4, 1851, several hundred people attended the dedication.

With the closest source of water halfway down the mountain, John French built a wooden railway to haul barrels of water up the track. Power was provided by a horse hitched to a circling crank at the top.

French soon realized that, properly equipped, the tram could also transport people. He installed the body of a sleigh, and passengers were soon being carried over 600 feet up the mountain. Moving at a 38-degree angle, riders had the sensation of being pulled almost straight up.

In 1856, French replaced the horse with a steam engine. As more and more visitors used the tramway, he covered it with a roof and added two six-passenger cars.

By the 1860s, tourists could choose to ride the tram all the way to the top — they disembarked right in the hotel — or ascend the mountain by foot, horseback, or coach, and finish by climbing a 522-step stone stairway.

For much of the nineteenth century, the Mt. Holyoke summit was among the region's most popular destinations. First came artists, such as Thomas Cole, who painted a famous picture of the Connecticut River "Oxbow" in 1836. Writers were also inspired by the panorama of mountains, valley, fields, towns, river, and sky. Ralph Waldo Emerson, Henry Wadsworth Longfellow, and Emily Dickinson were among the many writers who visited the summit.

"I have been all over England, have traveled through all the Highlands of Scotland; I have passed up and down the Rhine, have ascended Mt. Blanc, and stood on the Campagna at Rome, but never have seen anything so surpassingly lovely as this."

Dickinson grew up in nearby Amherst and attended Mount Holyoke Female Seminary. An annual hike up the mountain was one of the college's very first traditions. Their teachers believed that the mountain scenery would nourish students' souls and improve their characters while the climb strengthened their bodies. Mount Holyoke College continues to observe Mountain Day today.

In its heyday, the hotel at the summit of Mt. Holyoke had many famous guests. Singer Jenny Lind, the "Swedish Nightingale," gave a performance there in 1851. Alexander Graham Bell was a regular visitor. One 1860 entry in the guest register records a visit from Abraham Lincoln. Many years later, a handwriting expert declared the signature a forgery, but the fact that Lincoln might indeed have visited Mt. Holyoke attests to its fame.

By mid-century, the view was being compared to sights in more exotic parts of the world. In 1847, Massachusetts Senator Charles Sumner claimed, "I have been all over England, have traveled through all the Highlands of Scotland; I have passed up and down the Rhine, have ascended Mt. Blanc, and stood on the Campagna at Rome, but never have seen anything so surpassingly lovely as this."

What made the prospect from Mt. Holyoke so satisfying was the combination of rugged mountains and well-tended farms and villages. Fitted out in "the most modern style," the hotel provided the trappings of civilization from which to enjoy the view.

As early as the 1920s, people could drive to the top of Mt. Holyoke.

In 1871 John and Fanny French sold the hotel to investor John Dwight, who had long summered on the mountain. The Frenches continued to manage the establishment. Dwight re-named it the Holyoke Hotel and added a large four-story addition. By the 1890s the dining room could accommodate 200 guests at a time. There were tennis and croquet courts and other amenities commonly found at late nineteenth century resorts.

After the turn of the century, the automobile brought dramatic changes to what Americans did on the weekends and for vacations. As early as the 1920s, people could drive to the top of Mt. Holyoke. The problem was, they could also drive to more distant and exciting destinations. The Mt. Holyoke House was one of many mountain-top resorts that fell out of favor.

As the popularity of New England's mountain resorts declined, so did the condition of the Mt. Holyoke Hotel. The wooden tramway continued to operate, but fewer and fewer people chose to ride in it. The hotel was already struggling when Northampton businessman Joseph Skinner acquired it in 1916.

Over the next ten years, Skinner modernized the building, installing plumbing and electrical service, but it was too late. The era of the summit house was over. The great hurricane of 1938 devastated the property. The 1894 annex was a complete loss. Two years later, Skinner donated the entire 273-acre site to the Commonwealth as a park.

Local groups that advocated restoring the historic tramway were unsuccessful. In 1965, the state decided that the deteriorating track was becoming a safety hazard. On February 17th, employees of the Department of Natural Resources burned the cable railway to the ground. The loading platform can still be seen in the building, which the state park system restored in the 1980s.

The state Department of Conservation and Recreation has restored the surviving part of the Summit House. It is in Skinner State Park in Hadley.

Ethan Carr's essay, "Preserving Mt. Holyoke," is included in Cultivating a Past: Essays on the History of Hadley, Massachusetts, edited by Marla R. Miller (Amherst: University of Massachusetts Press, 2009).

On this day in 1899, Newton inventor F.O. Stanley took his wife Flora for a drive — into the record books. Leaving home in a steam-powered Locomobile, built in the Stanley brothers' Watertown shop, the...