From Aaron Lasky's Outwitting History: The Amazing Adventures of a Man Who Rescued a Million Yiddish Books:

…My enthusiasm matched only by my naivete, I assumed that [major Jewish organizations] would review my proposal, ask a few probing questions, applaud my initiative, and hand me a check. Instead, across one titanic desk after another, I met not with encouragement and support but condescension and dismissal:

"Yiddish books? Don't you know that Yiddish is dead?"

Admittedly, some were kinder than others, but the sentiments remained:

"The Jewish future lies with Hebrew, not Yiddish."

"Your plan is a throwback, an anachronism."

"You're riding the wrong horse, barking up the wrong tree; why don't you just go back to school and forget the whole idea."

"I don't think you understand," I protested. "If we don't save these books now, they'll be lost forever!" We as a people can't afford to lose our literature, our heritage, our culture…"

Outwitting History: The Amazing Adventures of a Man Who Rescued a Million Yiddish Books, by Aaron Lansky (Algonquin Books, 2004).

On this day in 1989, an Amherst man who had spent more than a decade scrounging in dumpsters, basements, and attics was awarded a MacArthur Foundation "genius grant." Aaron Lansky led an initially quixotic campaign to save Yiddish books and, in the process, Yiddish culture. As Jews from eastern and central Europe assimilated to new homelands, they abandoned the language and the literature of their parents and grandparents. Lansky traveled across the U.S. and around the world rescuing Yiddish books. With his MacArthur money, he opened the National Yiddish Book Center in Amherst, which houses the world's largest collection of Yiddish literature and is now "one of the most visited and talked about Jewish tourist destinations in the world."

Lansky and the small group of dedicated book-saviors who joined him delved into dumpsters in New York City alleys; they raced down to the Lower East Side when warned that a Yiddish library was about to be trashed. 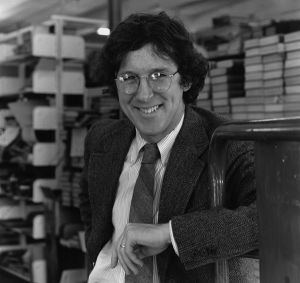 In the fall of 1973, during his freshman year at Hampshire College in Amherst, Aaron Lansky took the first course on the Holocaust ever offered on an American campus. As the course progressed, he slowly realized that he was more interested in how the Jews of Europe lived than in how they had died.

Searching for courses that would teach him about the culture of European Jewry, he discovered that he had ventured into a new field of study. While many colleges at that time offered Judaic Studies (i.e. Judaism as a religion), he was looking for Jewish Studies, a sociological view of the Jewish people and their history. He soon learned that there were few if any courses in the subject; nor were there works about it written in English, German, or even Hebrew. If he wanted to understand the lives of central and eastern European Jews, he soon realized, he would have to learn their native language. He would have to learn Yiddish.

But courses in Yiddish were hard to find in the 1970s. Most Jewish scholars, like most modern Jews, had distanced themselves from the language their grandparents had spoken. Yiddish was generally regarded as a "bastard tongue," corrupted German; it was an unwelcome reminder of an unassimilated people and often associated with radical labor movements and Zionist politics.

He understood that Yiddish was a living chronicle of the history of European Jews. 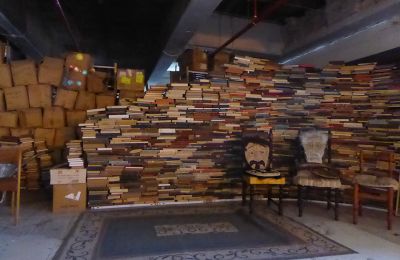 As the generations passed and Jewish immigrants became Americanized, fewer and fewer of them spoke the language of the Old World. Yiddish was dying out, and there were many Jews, eager to forget the cultural separateness it stood for, who were not unhappy to see it disappear.

But not Aaron Lansky. He understood that Yiddish was a living chronicle of the history of European Jews. It first emerged in the tenth or eleventh century among Jews in the Rhine River Valley. Since by law, they lived apart from the rest of population, their spoken language slowly differentiated itself from German. It became a kind of Jewish vernacular that blended German with words from Hebrew and Aramaic; expressions picked up from contact with Arabs, Greeks, Persians, and other western Europeans were intermingled.

When the Jews were forced to move from western to eastern Europe in the fourteenth and fifteenth centuries, they carried Yiddish with them, enriching it with Slavic influences. Eventually, Yiddish-speaking Jews from central and eastern Europe would comprise 75 percent of the world's Jewish population; they are the ancestors of most Jews living in America today.

For most of its history, Yiddish was primarily a spoken language. But after the middle of the nineteenth century, people began to write in Yiddish. As Lansky learned, "by the early twentieth century there were Yiddish newspapers and magazines, films and plays, politics, art, music — a freewheeling literature that marked one of the most concentrated outpourings of literary creativity in all of Jewish history."

One of Lansky's mentors told him, "If you want Yiddish books, you've got to go to them."

Lansky wanted to recover this vibrant culture and to do so, he had to learn Yiddish. Once he mastered the language and turned to the literature, he discovered that the hardest part would not be reading the books; it would be finding them.

Because of the prejudice against Yiddish among academics, few university libraries included Yiddish books. Among the five colleges in the Amherst area, only the University of Massachusetts had even a small collection. Publishers were no longer printing books in Yiddish. The men and women who had written and read Yiddish were passing away; when they died, their books tended to be discarded. One of Lansky's mentors told him, "If you want Yiddish books, you've got to go to them. Drive down to New York, to the Lower East Side . . . that's where you'll find Yiddish books." So Aaron Lansky began what turned out to be his life work: saving Yiddish books and, with them, Yiddish culture.

In the years that followed, there were both heartbreaking and heartwarming moments. Lansky and the small group of dedicated book-saviors who joined him delved into dumpsters in New York City alleys; they raced down to the Lower East Side when warned that a Yiddish library was about to be trashed. When elderly people discovered that a young Jewish man was actually interested in their books, they offered him stories, arguments, memories — and meals; all this was an important part of Lansky's education in Yiddish culture.

"It bestowed a new measure of credibility on the nascent Yiddish Book Center — and on Yiddish itself. It opened doors." 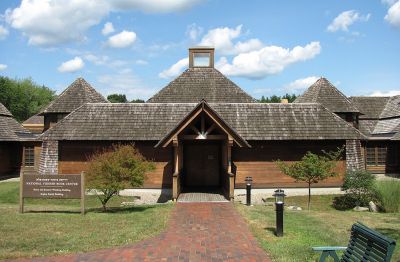 Lansky and his cohorts took the volumes back to Amherst where they had formed the Yiddish Book Center. Their goal was to save and then share as many Yiddish books as possible. As the number of volumes grew, storing, cataloging, and making them available to scholars and libraries became as much of a challenge as finding them had been originally. The collection was constantly moved from one storage site to another as it continued to grow.

In 1989 Lansky was shocked but thrilled by the news that he had won a $250,000 grant from the MacArthur Foundation. "Oh, what a difference that grant made!" he later recalled. "It bestowed a new measure of credibility on the nascent Yiddish Book Center — and on Yiddish itself. It opened doors. It paid off a mountain of debt accumulated during the nine years I had worked for next to nothing." And the grant helped the Yiddish Book Center build a permanent home of its own.

Hampshire College offered a 10-acre site on its campus. Individual supporters of the Book Center donated nearly $3,000,000 of the $7,000,000 cost; foundations provided the rest. Finally, in June of 1997, the building opened to the public. Fighting back tears, Lasky acknowledged "how gratifying it was finally to make good on the faith of all those who had trusted us with their books."

The National Yiddish Book Center in Amherst is open six days a week (closed on Saturdays).

Outwitting History: How One Man Rescued a Million Books and Saved a Civilization, by Aaron Lansky (Algonquin Books, 2004).