"I was working at the Navy Yard in Boston in a supply department. I was in the stock control division there. It had to do with the supplies that the Navy Yard had on hand to supply the ships or repair the ships. Everything was in our warehouse and we controlled the prices according to how many we had on hand and how many came in . . .

"I asked for a transfer. I found out that the navy was going to open something in Lawrence, and being so close to Lawrence we thought this would be easier to get to, the commuting part of it. So both Doris and I applied for a transfer and it was effected without any trouble at all.

"Over there I was actually asked to come to work again in a stock control division because I had the experience. But when I got there that division was not ready, so the commander in charge there asked me if I'd like to help him on personnel work to interview people to set up the different departments. And after about six months on that, when all the departments were ready to open, I had become quite interested in personnel work and he asked me if I would like to stay on. And one day a week I went into the labor board at the Nay Yard to learn more about personnel work, and I enjoyed it tremendously."

"I was in a production department and when a ship came in for repairs, all the repairs to be done to it were sent up to us and we would have to type it up. . .

From there I was in the stenographic pool. And then I became a secretary to the production officer, Captain Rush. Everybody feared him. I was enjoying working for him. There my job was all secretarial, but the confidential part of it was when a ship came in and it was docked, I was the first one to be called. . .

"I stopped in '44. I transferred and went to Lawrence for the Navy again. It was a redistribution center. All the materials, I guess it was left from the war, they were distributing to various naval places, I imagine. . . I was secretary there. It was on a smaller scale you know, you got to know everybody that you worked with.. . . Then we went to Boston for the Separation Center. . . There I was supervisor for thirty girls. . . I stopped working for the government in 1957."

Women were also instrumental to the operation of the federal armory in Springfield during WWII.
Springfield Armory

Good point. For more on the Springfiled Armory, and women's role there in WWII, see the MassMoment for April 30th.
Login

On this day in 1941, the Japanese attack on Pearl Harbor launched the people of Massachusetts into World War II — and out of the Depression. The state's industrial cities and shipyards sprang back to life to meet wartime demand for munitions, ships, and military supplies. But with men leaving to enlist, there was a sudden labor shortage; women stepped forward as "production soldiers," taking their place on assembly lines. In the mill town of Lowell, where women had traditionally worked unskilled jobs for low wages, new opportunities opened, offering independence, self-respect, and money. At the end of the war, many women lost their jobs to returning soldiers, but others, armed with new skills, remained. The number of working women never again fell to pre-war levels.

When the war ended, the government reversed its policy and called on women to quit their jobs so returning veterans could have them. 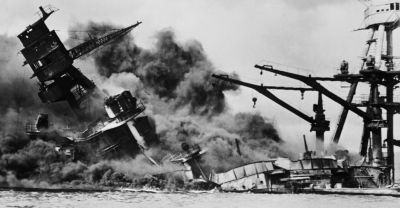 One of Lowell's claims to fame in its earliest years was the role women played in the labor force. There were several decades when young women from other parts of New England flocked to the city's textile mills; by the middle of the nineteenth century, however, men and women held unskilled factory jobs in roughly equal numbers. But women were virtually excluded from skilled jobs that paid higher wages. This pattern persisted into the twentieth century. On the eve of World War II, women made up a third of the labor force in the Lowell textile mills but held only 134 of the more than 4,000 skilled and supervisory jobs.

In 1940 a woman in Lowell was lucky to have a job of any kind. The Massachusetts textile industry was among the first in the country to experience the effects of the Depression that would shatter the nation's economy in the 1930s. By 1925 competition from southern mills, which had cheap labor and cotton close at hand, had already caused many Lowell mills to close. Even after the Roosevelt administration launched the New Deal, jobs remained scarce, especially for married women. Lowell was an unusual American community; as the local paper reported, "working wives have been the rule rather than the exception for a long time." But in the 1920s and 1930s, many working-class women had no choice but to stay home; there was simply no work for anyone. Many families that had barely gotten by fell into desperate poverty.

Lowell was an unusual American community; as the local paper reported, "working wives have been the rule rather than the exception for a long time."

All that changed dramatically after Pearl Harbor. The old mills — the Merrimack, Boott, Ames, and Wannalancit — suddenly had orders for uniforms and other textiles needed by the armed forces. And new employers entered the scene. The availability of empty factory buildings and a large workforce made Lowell a natural location for new, war-related industries. In early 1942, the American Parachute Company began hiring women in Lowell; by year's end this one company had a workforce of over 1,000 women. Local shoe factories also came back to life with orders for military footwear.

Other defense companies were also drawn to Lowell. Remington Arms, General Electric, and U.S. Rubber offered women decent wages and working conditions and the chance to learn new skills. Women flocked to the new jobs. At Remington, 70% of the payroll was female, almost all from Lowell. At General Electric, women helped build airplanes and held other skilled jobs. The pay was excellent. A woman lucky enough to have a job in a textile mill in the 1930s earned $13 a week; during the war, Lowell women could earn twice that to start and many brought home up to $70 a week. The war gave them something they had never had before — choice. One Lowell woman recalled that when the war began, "I was at the Merrimack [textile mill] making $20 a week. I went to Remington and made $90. I went to United States Rubber and made $100."

One Lowell woman recalled that when the war began, "I was at the Merrimack [textile mill] making $20 a week. I went to Remington and made $90. I went to United States Rubber and made $100."

Lowell was of course not the only place where women workers were in demand. The enormous Charlestown Navy Yard hired many women for jobs previously opened only to men. Of the 52,000 people who worked at the Navy Yard during the war, more than 8,000 were female. There were also opportunities in more traditional fields as the war increased the need for accounting, bookkeeping, and secretarial services

To address the shortage of manpower, the U.S. government promoted the idea that patriotic women could best help the war effort by taking jobs men left when they went to war. The popular poster depicting Rosie the Riveter proclaimed, "We can do it!" while magazines urged women to "do the job he left behind." The campaign was a success. In Massachusetts and around the country, women began driving taxis, operating heavy machinery, loading and unloading freight, building ships and airplanes, and assembling munitions. Many businesses began hiring women to fill jobs — for example, bank teller — that had long been reserved for men.

Across the nation, between 1940 and 1945, the number of women with paid jobs rose from 12,000,000 to 18,000,000, an increase of 50%, as women responded to such slogans as "The more women at work, the sooner we win," and "Women, you could hasten victory by working and save your man." Six million American women entered the workforce for the first time during these years.

. . . women responded to such slogans as "The more women at work, the sooner we win," and "Women, you could hasten victory by working and save your man."

In spite of the economic benefits, life on the home front was by no means easy for women, especially for those with children. Many factories required six- or seven-day work weeks, leaving a woman little time or energy to tend to her family's needs. While single women enjoyed the money and independence war work gave them, they also experienced difficulties. Sexual harassment, long hours, strenuous physical labor, and strict wartime rules were among the most common complaints.

When the war ended, the government reversed its policy and called on women to quit their jobs so returning veterans could have them. Many women for whom war work was not an economic necessity willingly complied. Others were forced out of their higher-paying skilled jobs and back to the ranks of unskilled, underpaid workers. Doors that the war had opened for women workers slammed shut. While the number of American women in the workforce continued to grow, it would take decades, and a series of law suits, to restore the occupational opportunities WW II had created.