From Woman in the Nineteenth Century

Yet, then and only then will mankind be ripe for this, when inward and outward freedom for Woman as much as for Man shall be acknowledged as a right, not yielded as a concession. As the friend of the negro assumes that one man cannot by right hold another in bondage, so should the friend of Woman assume that Man cannot by right lay even well-meant restrictions on Woman….

What Woman needs is not as a woman to act or rule, but as a nature to grow, as an intellect to discern, as a soul to live freely and unimpeded, to unfold such powers as were given her when we left our common home….

I think women need, especially at this juncture, a much greater range of occupation than they have, to rouse their latent powers….

In families that I know, some little girls like to saw wood, others to use carpenters' tools. Where these tastes are indulged, cheerfulness and good-humor are promoted. Where they are forbidden, because "such things are not proper for girls," they grow sullen and mischievous….

I have no doubt, however, that a large proportion of women would give themselves to the same employments as now, because there are circumstances that must lead them…. The difference would that all need not be constrained to employments for which some are unfit.

On this day in 1810, Margaret Fuller was born in Cambridge. Teacher, author, critic, philosopher, journalist, she is remembered today as a woman with a formidable intellect and a willingness to take risks. One of the nation's first and most articulate feminists, she wrote Woman in the Nineteenth Century, published in 1845. This pathbreaking book argued that "every arbitrary barrier [should be] thrown down . . . every path laid open to Woman as freely as to Man." In 1848 Margaret Fuller traveled in Europe as a foreign correspondent for the New York Tribune and became involved in the fight for a Roman republic. She sailed for home in 1850 with her Italian husband and their young son. All perished in a shipwreck off Long Island.

Yet she gained greater knowledge of history, music, mathematics, and ancient and modern languages than was afforded all but a handful of American men and virtually no women. 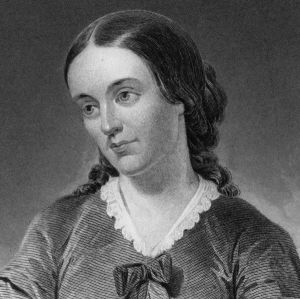 "Very early I knew that the only object in life was to grow," wrote Margaret Fuller. She never lost sight of that vision, taking an active role in intellectual and political affairs in a way that was very rare for a woman in the early nineteenth century.

Her father, Timothy Fuller, a prominent figure in Massachusetts politics and an intense individual, oversaw Margaret's unusual education himself. She learned English and Latin grammar, and was reading the classics by the age of seven. It was far from a "natural childhood," she would write later; she suffered from nightmares, "spectral illusions," and migraine headaches. Yet she gained greater knowledge of history, music, mathematics, and ancient and modern languages than was afforded all but a handful of American men and virtually no women.

In 1836 she began a lifelong friendship with Ralph Waldo Emerson. Like most of her friends, he would alternately find her admirable and arrogant. "I now know all the people worth knowing in America," she told him with characteristic immodesty, "and I find no intellect comparable to my own."

"I now know all the people worth knowing in America," she told him with characteristic immodesty, "and I find no intellect comparable to my own." 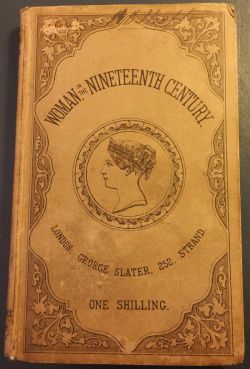 Through Emerson, Margaret Fuller met Bronson Alcott, Louisa May's eccentric but brilliant father. Impressed with her erudition, Alcott invited her to teach languages at his innovative school in Boston. Alcott was an extraordinary conversationalist, and he doubtless helped Fuller develop her skill in discussion and teaching using the Socratic approach. When Alcott's school closed in 1837, Margaret took a teaching position in Providence, Rhode Island.

Two years later, she was back in Boston, where she launched a series of "Conversations" for women. For the next five years, her intellect and charisma drew the preeminent women in the Boston area, including Emerson's wife Lydia, the formidable sisters Elizabeth, Mary, and Sophia Peabody (Mary would marry the education reformer Horace Mann; Sophia would wed Nathaniel Hawthorne), and the Rev. Theodore Parker's wife Lydia.

During the same period, Fuller became a leading member of the (mostly male) circle of Transcendentalists. They shared a humanistic philosophy, emphasizing an intuitive and spiritual approach to life. The group decided to publish a quarterly journal, The Dial, and Margaret Fuller was its first editor. In 1843, with Emerson now the editor, the Dial published Fuller's provocative essay "The Great Lawsuit: Man versus Men and Woman versus Women," which she expanded into her book Woman in the Nineteenth Century, published in 1845.

After finishing the book, she told a friend she felt "a delightful glow as if I had put a good deal of my true life in it, as if, suppose I went away now, the measure of my footprint would be left on the earth."

After finishing the book, she told a friend she felt "a delightful glow as if I had put a good deal of my true life in it, as if, suppose I went away now, the measure of my footprint would be left on the earth." And indeed it was. When Susan B. Anthony and Elizabeth Cady Stanton wrote The History of Woman Suffrage in 1881, they credited Margaret Fuller with having "more influence on the thought of American women than any woman previous to her time."

Horace Greeley, publisher of the New York Tribune, considered Margaret Fuller "the most remarkable and in some respects the greatest woman whom America has yet known." He hired her to write arts and literary criticism for his paper, and in 1844 she moved to New York. When she sailed to Europe in 1846 on assignment for the Tribune, she became the nation's first female foreign correspondent.

Her reputation preceded her; in London and Paris, she was soon mixing with an extraordinary array of European intellectuals and artists — Wordsworth, George Sand, Chopin — as well Guiseppe Mazzini, the leader of the Italian Unification Movement.

in London and Paris, she was soon mixing with an extraordinary array of European intellectuals and artists — Wordsworth, George Sand, Chopin — as well Guiseppe Mazzini, the leader of the Italian Unification Movement.

Inspired by Mazzini, she traveled to Italy. She met a number of Italian writers and artists and found herself drawn to the movement for Italian independence. In 1847 she met Giovanni Angelo Ossoli, a young Italian nobleman who was active in the cause. They became lovers, and in September of the following year, Margaret gave birth to their son, Angelo. The couple wed in 1849.

The Roman Republic was proclaimed in February 1849; only five months later, it was overthrown. Margaret, her husband, and son moved from Rome to the greater safety of Florence. There she continued writing her history of the Roman revolution and corresponded with dozens of friends on both sides of the Atlantic. But she was disturbed by ongoing police surveillance and her inability to find a publisher for her book. Reluctantly she decided to leave Europe.

Woman in the Nineteenth Century, by Margaret Fuller (republished by W.W. Norton & Co, 1971).