We are only concerned at present, however, with the fact that the western ridge of the Appalachian chain separates New England from the rest of the Union. . . . The commercial intercourse of New England with the West has been greatly obstructed by this mountain barrier….

The people of New England did not . . . sit down behind their mountain wall and suck their thumbs. Close business relations with the great West were essential to their prosperity, and they determined to establish and maintain them. Some way must be provided whereby a share of the western trade might reach their markets. If the mountain would not give way to Mahomet, Mahomet must go through the mountain. That is how the Hoosac Tunnel came to be built. It is a clear announcement that New England does not intend to be left out in the cold . . .

The visitor to the tunnel finds the work going on at both ends and at the middle. From the eastern to the western portal the distance is four miles and eighty-four hundredths;—making a longer tunnel than any now in operation in the world . . .

The ride into the tunnel is far from being a cheerful one. The fitful glare of the lamps upon the walls of the dripping cavern,— the frightful noises that echo from the low roof, and the ghoul-like voices of the miners coming out of the gloom ahead, are not what would be called enlivening.. . .

If the contract be fulfilled, more than twenty-six years will have elapsed between the chartering of the road and its completion; and more than twenty-two years since work was begun upon the tunnel. During a part of this time work has been suspended, but it is probable that nearly if not quite eighteen years of steady work will have been done upon the tunnel by the time it is finished. As to the cost, that is a mere bagatelle … the whole cost of the work [is] in the neighborhood of nine millions of dollars. That is the price which Massachusetts consents to pay rather than be left out in the cold.

The Hoosac Tunnel project had a lot of critics; hence the nick-name "The Great Bore." Among its leading critics were future U. S. Supreme Court Justice Oliver Wendell Holmes, his quote of the day was: "wall up a dozen lawyers at one end of the tunnel and put a good fee at the other."
Dates & Trains

Today's article seems to have a few inconsistancies with respect to dates: The narrative points out the first train passed through the tunnel 24 years after construction began. A start date of 3/16/1853 is given (Wikipedia indicates an 1848 date). A finish date of 11/27/1874 is likewise given with a first train date of 2/9/1875. This woud mean it took 21 years, 10 months, 3 weeks, and 3 days from start to first train, instead of 24 years. Additionally, a 2/9/1875 first train date is given. Next, the article indicates the first freight train followed 2 months later (sometime in April, 1875) and some 6 months later the first passenger train made use of the tunnel in October, 1875. As far as I know there are only freight & passenger trains; so, then what kind of train passed through the tunnel on 2/9/1875? Was it a train used by the construction crew; thus, not classified as either freight or passenger?
Login

On this day in 1874, workers in the small western Massachusetts town of Florida finished the Hoosac Tunnel, bringing to completion one of the world's most ambitious engineering projects. The Hoosac Mountain Range had long been a formidable natural barrier to the development of towns in the northern tier of Massachusetts. As industry grew in this part of the state, so did pressure for a rail connection across the mountains. Construction of the tunnel took more than 20 years, $17,000,000, and the lives of 196 men. On Thanksgiving Day in 1874, the last 16 feet of rock were blasted out of the way under North Adams. Two months later, the first train passed through what was then the second longest tunnel in the world.

The work continued around the clock, with 750 men rotating through three eight-hour shifts. 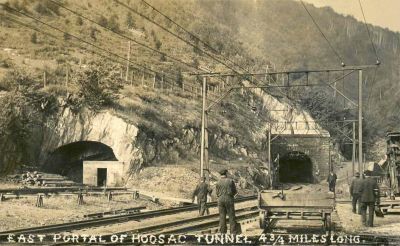 At the westernmost edge of northern Massachusetts, a great wall of rock rises up, as if to mark the boundary of the state and discourage anyone from traveling farther west. By the early nineteenth century, the Hoosac Mountain Range was proving to be a serious obstacle to the growth of the economy in the northern half of the state. Grain and other products were transported east from the rich farmlands of New York State, but the mountains forced traders to turn south down the Hudson River Valley. The products of northern textile, shoe, and paper factories could not flow across the mountains. In 1825 the legislature decided to commission a survey of the range in hopes of finding a passable route through it. The legislators had in mind a canal, but the very year the survey was approved, the first American railroad began operation. Plans for a Hoosac canal were put on hold.

In the next 20 years, a rail line from Boston to Albany was built to serve the southern half of the state. The B&A railroad company charged exorbitant rates for towns in the north to connect to their route; as a result, most northern towns remained isolated from western trade. The industrial entrepreneurs of northern Massachusetts, such as paper manufacturer Alvah Crocker of Fitchburg, pushed hard for a northern rail route. These private investors eventually built rail lines that led to the Hoosac Range from the east and from the west. Still, the mountains stood in the way, cutting communities off from the lucrative trade routes of the Hudson River to the south and the Erie Canal to the west.

One is said to have exclaimed, "It seems that Providence had marked out this route from the east to the west!" A doubter replied, "Perhaps so, but it is a pity that the finger of Providence hadn't been thrust through the Hoosac Mountain."

By the middle of the century, industrialist entrepreneurs and investors were determined to construct a railroad tunnel through the Hoosac Range. Engineers and surveyors enthusiastically supported the idea. One is said to have exclaimed, "It seems that Providence had marked out this route from the east to the west!" A doubter replied, "Perhaps so, but it is a pity that the finger of Providence hadn't been thrust through the Hoosac Mountain." The distance was short — only four and a half miles — but the tracks had to pass through solid rock.

The enthusiasts prevailed. Although it took several years for investors to raise the money, on March 16, 1853, ground was finally broken in Florida, Massachusetts, for the Hoosac Tunnel.

No project on this scale had ever been attempted anywhere in the world. Engineers made use of every available tool, and several devices were developed specifically for the project. Even so, boring through five miles of rock would take more than 20 years and cost nearly 200 lives.

The pace was so slow, that critics referred to it as "The Great Bore."

The engineers had no choice but to experiment, and many of the experiments failed. In 1852, for example, a 70-ton steam-driven machine with a flat circular cutting head was used to drill a 24-foot hole — the full width of the tunnel — in one operation. The machine managed to bore 10 feet into the mountain and then died. The device remained stuck in place — for years, in fact — and engineers had to start the tunnel over again in a new location. The hole from this aborted start can still be found in the woods near the east end of the tunnel.

Progress was slow. Workers used hand tools to drill holes that were then filled with gunpowder and blasted. Even with crews drilling inward from both sides and outward in both directions from a central shaft in the middle of the mountain, the tunnel opening grew by only 60 feet a month. At that rate, engineers estimated, it would take well over a generation to complete. The pace was so slow, that critics referred to it as "The Great Bore."

In the 1860s, two innovations helped speed things up. One was a compressed-air power drill, invented by Charles Burleigh of Fitchburg. The other was tri-nitroglycerine. The Hoosac Tunnel workers were the first to put this powerful but extremely unstable explosive to industrial use.

Around each opening, there were clusters of huts for the workers and their families, schools, and churches.

Progress on the tunnel accelerated but at great human cost. Accidents and engineering failures claimed 196 lives during the two decades of construction. Most of those lost were Irish or Cornish miners who had come to western Massachusetts for jobs on the tunnel project. The work continued around the clock, with 750 men rotating through three eight-hour shifts.

The men who built the tunnel also built lives on the slopes of the Hoosac Range. Around each opening, there were clusters of huts for the workers and their families, schools, and churches. Beyond the huts were wooden buildings that housed the blacksmith and the machine shops, the air compressors and steam engines, and the building where the nitroglycerine was made. Known as the East Camp and the West Camp, these temporary towns were home to a generation of tunnel workers and their families.

On February 9, 1875, 24 years after construction began, the first train passed through the tunnel. The first freight train followed two months later, and in October 1875, the first passenger train used the tunnel on its way from Boston to Troy, New York.

The Hoosac Tunnel has been enlarged to accommodate modern trains. It is still the longest transportation tunnel east of the Rocky Mountains.

A Pinprick of Light: The Troy and Greenfield Railroad and its Hoosac Tunnel, by Carl R. Byron (Brattleboro, Vt., 1978).