AWFUL COMBINATION
of
SOCIALISM, ABOLITIONISM, AND INFIDELITY.
The Pantalettes Striking for the Pantaloons.
Bible and Constitution Repudiated.

. . . Abby Kelly Foster--"I do not talk of woman's rights, but of human rights, the rights of human beings. I do not come to ask [for] them, but to demand them; not to get down on my knees and beg for them, but to claim them. . . . We have our rights, and the right to revolt, as did our fathers against King George the Third--the right to rise up and cut the tyrants' throats. On this subject I scorn to talk like a woman. We must give them the truth, and not twaddle. We must not be mealy mouthed with our tyrants in broadcloth and tight clothes."

In short, in the harangue of Abby, she simply demanded that men and women should be treated as human beings all alike--that the sexes should be forgotten in society--that property and votes and offices, civil, religious and military, even to the right of cutting throats, should belong to woman as well as to man. She urged that the work should be commenced by educating both sexes together, and that all distinction in society between man and woman should be abolished, and that a woman was just as well qualified to be President as a man. [Applause.]

Mr. Foster (husband of Abby Kelly) returned to the question of woman's right to use the sword. He thought it ought to be left an open question, for there were a million and a half of women in the South, in a condition which makes us shudder to think of, and God only knows how soon the sword may be drawn for their deliverance, and I would not like to see her hands tied in the struggle. For this reason he considered it inexpedient to discuss the question of woman's right to use the sword. After a long rigmarole on woman hugging her chains, he concluded by charging that the pulpit and St. Paul were responsible for the enslavement of the sex. "When the priest says to the woman, 'Love, honor, and obey,' what can she do?"

Mr. Foster (husband to Abby Kelly)-- went on to show that many women who did not appear so, were friends of this movement. He was once lecturing on the necessity of dissolving the Union, to get rid of the curse of slavery, when a man who dared not openly avow it, slipped a three dollar bill into his hand very quietly. So there are women who dare not speak, who will slip a three dollar bill to the advocate of woman's rights, if they had a chance.

Mr. Foster—He next argued that the slavery of woman degraded both sexes, and man the most, for that woman was naturally better than man.

And at a quarter past ten P.M. the Convention adjourned, to meet again at half past nine in the morning, to finish up the resolutions.

Abby spent most of her adult life in Worcester County but her County of birth was Hampshire. Pelham is tucked between Amherst and the Quabbin Resevoir, many miles from the Worcester County line.
Login

On this day in 1811, Abby Kelley Foster was born in the Worcester County town of Pelham. Growing up in a Quaker family, she developed a strong sense of morality and an independent spirit. She attended a combination of town and Quaker boarding schools before becoming a teacher herself at a Quaker school in Lynn, Massachusetts. There she met Stephen Foster, an outspoken anti-slavery lecturer from New Hampshire, whom she married in 1845. At the annual meeting of the Massachusetts Woman Suffrage Association in 1872, Abby proposed that all the members sign a pledge to withhold their taxes until women were permitted to vote, a commitment she held until her death in 1887.

At the annual meeting of the Massachusetts Woman Suffrage Association in 1872, Abby proposed that all the members sign a pledge to withhold their taxes until women were permitted to vote. 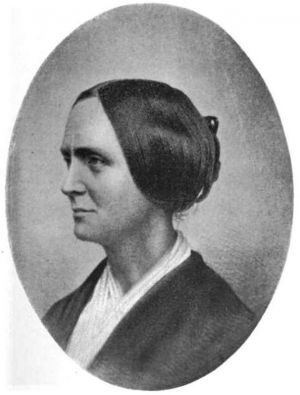 In the years before the Civil War, a Worcester couple, Stephen and Abby Kelley Foster, were among the nation's most constant and courageous campaigners against slavery and for women's rights. Both had shown themselves willing to take great risks in support of causes they believed in. In the 1870s, near the end of their lives, they again took a stand against injustice. Insisting that "taxation without representation is tyranny," they refused to pay their real estate taxes because Abby could not vote. The City of Worcester auctioned their home to the highest bidder.

Abby Kelley was born in 1811 in the Hampshire County town of Pelham. Growing up in a Quaker family, she developed a strong sense of morality and an independent spirit. She attended a combination of town and Quaker boarding schools. She earned the money to pay for her own and her sister's tuition by taking a teaching job every few terms. She was 25 before she could strike out on her own. She moved to Lynn and began teaching at the Quaker school there.

Lynn was a hot-bed of abolitionism, a cause Abby Kelley soon embraced. Among her new abolitionist friends was Stephen Foster, an outspoken anti-slavery lecturer from New Hampshire. For the next four years, they devoted all of their energies to the anti-slavery movement. In 1845, they were married.

By this time both of them had earned national reputations — even notoriety — for their willingness to make personal sacrifices for the cause. Abby Kelley was an unusually gifted public speaker. As a fellow abolitionist once said, "She was one of the few whose words startled and aroused the land; who compelled attention; who made the guilty tremble; who forced sleeping consciences to awake; and forbade that they should sleep again until slavery ceased. . . . "

"She was one of the few whose words startled and aroused the land . . ."

Beginning in the spring of 1839, she defied convention by going on the road and lecturing to mixed audiences of men and women on the evils of slavery. Very few other women had dared to assume what was generally considered a male role. Her practice of traveling with male and occasionally black abolitionists drew charges of gross immorality. Abby Kelley was undeterred; in fact, she realized that her notoriety brought needed attention to the cause.

Stephen Foster was an equally controversial figure. He publicly and repeatedly denounced the clergy for its refusal to condemn slavery as a moral wrong. Believing that it was a failure of character to compromise on moral issues, Foster also attacked public officials for their willingness to tolerate the institution of slavery.

Their first and only child, Alla, was born in 1847. For a few years, neither did much public speaking. By 1850, however, both of them had returned to the anti-slavery lecture circuit, and Abby Kelley had also taken up the cause of women's rights. She "stood in the thick of the fight for the slaves, and at the same time she hewed out the path over which women are now walking toward their equal political rights," Lucy Stone recalled at Kelley Foster's death. "The world of women owe her a debt which they can never pay. The movement for the equal rights of women began directly and emphatically with her. . . . She has no peer, and she leaves no successor."

"The movement for the equal rights of women began directly and emphatically with her. . . . She has no peer, and she leaves no successor."

A devoted and loving mother, she found the long absences from her daughter painful. She took comfort in the fact that Stephen usually remained at home with Alla on the small farm they had bought near Tatnuck Square in Worcester. In this, as in so many other ways, the Fosters disregarded traditional expectations.

When the first national woman's rights convention convened in Worcester in the fall of 1850, both Fosters were in attendance. Speaking to the crowd in Brinley Hall, Abby Kelley attacked the laws that deprived married women of their property, their earnings, even their children, and decried the fact that women were denied the right to vote.

All through the 1850s and again after the Civil War, the Fosters worked to win equal rights for women. The couple repeatedly petitioned the Massachusetts legislature for woman suffrage; their petitions were ignored or rejected. They decided that more dramatic action was needed. At the annual meeting of the Massachusetts Woman Suffrage Association in 1872, Abby proposed that all the members sign a pledge to withhold their taxes until women were permitted to vote. Only two other women had the courage to sign, but the action drew attention to the issue.

Worcester officials were not eager to confiscate the home of such a well-known couple, but they were afraid to leave the challenge unanswered. The Fosters pushed the matter, claiming that the city should take a stand one way or another — either forgive their taxes or seize their house. Finally, the Tax Collector posted a notice in the newspapers and nailed a signed copy on the Fosters' door: the property would be auctioned on February 20, 1874, unless the couple paid $69.60 in taxes plus interest and court costs.

The Fosters immediately organized a Convention on Taxation Without Representation, held in Worcester the day before the auction. The meeting drew national attention to the Fosters' protest. At the auction the next day, only one man offered a bid, but he reneged when Stephen Foster called him a "robber." Stephen declared that he and Abby would not leave the house of their own accord but would have to be forcibly evicted.

The city took legal possession of the property, but the Fosters refused to move. The newspaper headline "Abby Kelley Foster Homeless" aroused public sympathy and a stalemate began. For the remaining five years of Stephen Foster's life, the city held an auction every year; each year Stephen Foster was the only bidder. The back taxes were taken out of the amount he paid to repurchase his home. In 1880 Stephen Foster died. Two years later, with her own health failing, Abby Kelley Foster sold the property.

In 1973, 100 years after the couple began their tax protest, the National Park Service designated Liberty Farm, as the Fosters' home in Worcester was known, a National Historic Landmark.

Abby Kelley is one of four Worcester area women honored with a portrait in the city's historic Mechanics Hall.

Ahead of Her Time: Abby Kelley and the Politics of Antislavery, by Dorothy Sterling (W.W. Norton & Co., 1991).

On this day in 1818, woman's rights pioneer Lucy Stone was born on a farm in West Brookfield. Her mother greeted the news that her sixth child was a girl by exclaiming, "Oh Dear! I...