In the 1860s, Ichabod Washburn was a successful wire manufacturer who recounted his rise to the top of Worcester's economic and social ladder. After his death in 1868, an admiring minister published the autobiography to show "how a great business was developed and large wealth acquired for the uses of benevolence."

During the winter [of 1819], I engaged in business on my own account for the first time, manufacturing ploughs. To stock myself, I required a small capital or credit.

With a few dollars I had earned I commenced, relying in part on my credit. There was no difficulty in getting such stock as I wanted where I was known, but how to obtain plough-moulds, which were indispensable, I did not know. I was advised to make application to Mr. Waldo in Worcester. I was an entire stranger to him, so that when I asked if he would trust me until I could sell them, his mild, discriminative eye was turned upon me, as if in searching scrutiny. But to my great relief, he at once filled up a blank note for the amount to be paid in gold or silver, which I signed, and in due time paid…. No part of my subsequent business life gave me more pleasure than that winter. Rising with a light heart, generally at my anvil by sunrise, working until nine in the evening, and then retiring fatigued, I realised fully that the sleep of the laboring man is sweet.

…. In the autumn of 1834, I continued the business of manufacturing wire on my own account, at what is called the Grove Mill, built by Stephen Salisbury, Esq., under my direction.

In the enlargement of the business from time to time, the machinery has been most drafted by myself, and constructed under my direction. The iron-wire department gradually increased up to 1842, when my brother Charles engaged with me as a co-partner, continuing until 1849.

One year after, in 1850, I took as a partner, my son-in-law, P.L. Moen. In him, I have had a most efficient aid in bringing up the business to its present mammouth size. While he makes no claim to be a practical mechanic, he has by his exactness, promptitude, and aptness for business generally, supplied a deficiency in myself indispensable to success. He has managed with rare ability our finances, a department of the business for which I never had the taste or inclination, always preferring to be among the machinery, doing the work and handling the tools I was used to, though oftentimes at the expense of smutty face and greasy hands.

Autobiography And Memorials of Ichabod Washburn. Showing how a great business was developed and large wealth acquired for the uses of benevolence. By Rev. Henry T. Cheever (Boston: D. Lothrop and Company, 1878). Online at http://www.assumption.edu/users/mcclymer/TAHCourse2/WashburnAutobiography.html

On this day in 1848, the Governor of Massachusetts signed a charter giving the once-sleepy village of Worcester the legal status of a city. For over a century, Worcester's isolated location in the hilly center of Massachusetts caused it to grow more slowly than coastal ports like Boston and river towns like Springfield. The opening of a canal link to Providence in 1828 and the arrival of the railroads only a few years later spurred the growth of industry and commerce. Local investors and a highly skilled work force helped create an unusually diversified economy. Worcester was well on its way to becoming the second-largest city in the state, indeed in all of New England. So it has remained to the present day.

In 1850, six railroads passed through the city, with 24 trains arriving and departing each day. 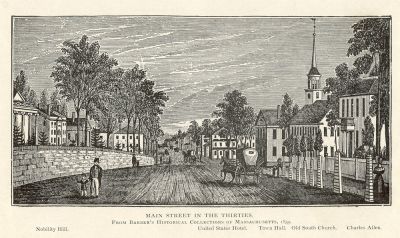 In early 1673, a small group of English families founded a new settlement 50 miles due west of Boston. On a series of hills overlooking a river they called the Blackstone, they established Quinsigamond Plantation, borrowing the name from the local Nipmuc Indians.

A large lake on the eastern edge of the village was a plentiful source of fish. There was no shortage of food, but the early years were rough. The settlers' timing was poor. King Philip's War broke out in 1675, and bloody conflict with the Nipmucs forced the English to abandon the settlement several times during the hostilities. At the end of the war, Quinsigamond Plantation was incorporated and in 1684 given the name Worcester.

Unlike Springfield and the bustling ports of Boston, Salem, and Newburyport, Worcester was hard to get to. Only in 1722 was the population large and stable enough for the colonial authorities to recognize it as a town. But when British troops occupied Boston, Worcester's remoteness was suddenly an asset. It was the town's inaccessibility that appealed to the Patriot printer Isaiah Thomas when he sought a place to publish The Massachusetts Spy during the Revolution.

The Transportation Revolution of the early nineteenth century brought an end to Worcester's isolation. In 1828 the Blackstone Canal linked Worcester and Providence, Rhode Island. The canal was transformative but short-lived; the first train arrived in Worcester in 1835, and the canal company went out of business in 1848. In 1850, six railroads passed through the city, with 24 trains arriving and departing each day. In the age of rail, Worcester's location in the center of the state transformed what had been a backwater into a busy commercial hub. The population quadrupled from around 4,000 in 1830 to more than 17,000 in 1850.

Stephen Salisbury II and William T. Merrifield, two local entrepreneurs, were among the first men in Massachusetts to recognize how profitable large-scale manufacturing for distant markets could be. They built factories and rented space in their buildings to other manufacturers. This system fostered innovation and risk taking, and made it possible for individual mechanics to accumulate enough capital to set up businesses of their own. The diversified economy that would be Worcester's great strength was taking shape as early as the 1830s, with cotton, woolen, and paper mills, boot and shoe factories, machine shops, foundries, and coach making operations all prospering.

In 1831 Ichabod Washburn, a talented Worcester mechanic, founded a wire-making firm that by 1865 had grown into the largest in the world, employing 3,000 skilled men. (Unlike the shoe and textile industries, the wire trades were closed to women.) By the 1880s, more than 40 percent of the city's manufacturing jobs were in the metal trades, which produced piano wire (previously imported from Europe), telegraph lines, sewing machine needles, machine tools, and the fences and plows needed on the rapidly expanding agricultural frontier. In the 1890s, the company Washburn started was turning out 100,000 tons of barbed wire a year.

The city's growing number of factories created a steady demand for labor, and Worcester's population mushroomed. Between 1790 and 1860, the population grew from 2,100 to 25,000, a 12-fold increase. The trend continued after the Civil War; by 1900, both the number of workers and the value of their output had doubled.

With less than one percent of the city's residents casting votes, Worcester adopted the new form of government by a two-to-one margin.

The majority of the labor force were first and second generation immigrants. Swedes were the first large group to arrive after the Irish; newcomers from eastern and southern Europe followed. This mixture led to a stark division between Catholics (the Irish, Italians, and Poles) and Protestants (chiefly the Swedes and Finns). The different ethnic groups lived in their own neighborhoods and participated in city politics much less than working people did in Boston or Springfield. "Worcester," one historian concluded, "never developed a radical labor consciousness and had very few strikes. [It] built a reputation as an anti-union city with a highly skilled, placid workforce, ruled by a small coterie of Yankee elites."

By 1848 Worcester was clearly ready to be governed as a city. Governor George N. Briggs signed a city charter on February 29, 1848; the first mention of the event came over two weeks later on March 15th when local newspapers announced that there would be a special town meeting to vote on the charter. Three days later, 1,513 men gathered at Town Hall. With less than one percent of the city's residents casting votes, Worcester adopted the new form of government by a two-to-one margin.

As the Worcester Telegram noted 100 years later, "Worcester's citizens apparently were not very excited about the governor's approval of the charter." The change doubtless seemed a matter of legal technicalities to most people. But it is also true that large numbers of people ¡¡ìC all of the women, for example ¡¡ìC did not have the right to vote. Within a few months of the approval of the city charter, 300 men and women gathered in Seneca Falls, New York, would launch the American woman's rights movement by approving the Declaration of Sentiments. Two years later, Worcester itself would host the first national convention for woman's rights in Brinley Hall, with more than 1,000 delegates in attendance.

The state's first Young Men's Anti-Slavery Convention was held in Worcester in 1838, and the following year the female Worcester Anti-Slavery Sewing Circle was formed.

Worcester's reformers were also active in campaigns for temperance and the abolition of slavery. Temperance was a popular but polarizing cause. For every workingman who pledged to give up drink, there were dozens who resisted the call for temperance. Like most of the city's business and religious leaders, Ichabod Washburn was a strong supporter of temperance. When he embarked on a house building project in 1829, he decided to supply the workers with "lemonade, crackers and cheese," rather than the customary barrels of rum; he made the rounds of the neighborhood and "could find only a few willing to help."

Worcester was a fervently anti-slavery town. The county's first Anti-Slavery Convention was held at the court house in 1819, but it was in the 1820s and 1830s that the movement gained large numbers of supporters. The state's first Young Men's Anti-Slavery Convention was held in Worcester in 1838, and the following year the female Worcester Anti-Slavery Sewing Circle was formed. In 1848, the same year the city charter was approved, the Free Soil Party, a new national political party opposed to slavery, was organized in Worcester.

In 1948, as the city celebrated the 100th anniversary of its charter, the population surpassed 200,000. This would prove to be the peak, but even as it lost population in the coming decades, Worcester would maintain its position as the second largest city in the state and the region.