. . . While flying conditions were not ideal, the weather man provided an almost perfect day for the spectators. The constant drifting of clouds from the southeast caused the fliers some uneasiness during the first part of the pageant but as the clouds remained high there was no interference with the events. The wind reached a velocity of 25 miles per hour and close to the ground the fliers reported that the air was rather "bumpy" . . .

The pageant was unmarred by a single accident to the planes or their pilots which had serious results. There was one narrow escape, however, when Richard E. Cobb, while piloting a Travel Air plane, in the high-powered commercial handicap race was struck on the forehead by the cap of his gasoline tank. Cobb was stunned by the blow and lost his senses for a few moments. When he recovered he found himself in a "spin" close to the ground. By fast thinking he was able to drive his plane out of the "spin" and finished second in the race. . . .

While the flying during the whole afternoon provided the full range of air thrills, it remained for Ralph "Kitty" Barrows of the New England Aircraft Corp. to provide the thrill which aviators of long experience admire, the "dead stick landing." He also looped the loop, showed the "falling leaf," did barrel-rolls and other stunts, but these were amateurish compared with his famous "dead stick landing." The dead stick landing means that a pilot shuts off his motor in the air and glides to the ground.

Barrows climbed to about 1500 feet before he shut off his motor. The speed of his climb gave his plane sufficient momentum for a wide glide by cautious use of the prevailing winds. He dived, nosed the plane over on its wings in a perfect bank, dived again, glided, rolled, dived for the third time, leveled his plane while less than 25 feet from the ground and landed as lightly as a bird. The crowd roared its approval and the cool and happy airman hobbled off the runway. He hobbled because just two weeks ago he was released from a hospital after an operation for appendicitis. . . .

On this day in 1927, two runways and two hangars opened for business at the new Worcester Airport. A week later, more than 30,000 people flocked to the official dedication. Stunt flyers, parachutists, and military pilots entertained. Built on a hill in North Grafton, this small field was the only airport Worcester was to have for the next 19 years. By 1940 Worcester was the largest city in the country without regular passenger air service. In 1944 ground was broken for a new airport closer to downtown, and two years later, commercial service began. The next 50 years brought good times and bad. After reaching its peak in the late 1980s, when an average 350,000 passengers utilized the airport, airline deregulation and local weather challenges, passenger service has declined. However, efforts to improve the airport and attract carriers continue.

Until 1945, the field hosted airplanes such as Jennies, Robins, Wacos, Fords, Stearmans, Cubs, and Taylorcraft; special charters brought visiting performers and dignitaries, and pioneers such as Wiley Post made stopovers on around-the-world flights. 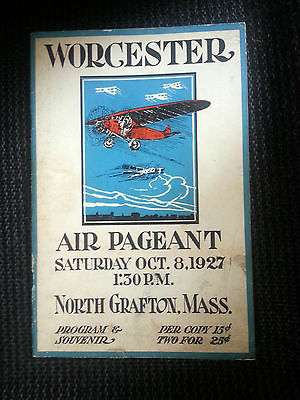 In the 1920s, flying was an adventure. For the Whittall brothers of central Massachusetts, the years after World War I were spent testing their skill and luck by flying canvas-covered biplanes over the fields and villages of Worcester County. But the Whittalls, like other local pilots, faced a serious obstacle: there was no airport in Worcester. Farm fields provided a bumpy alternative for recreational flyers, but commercial passenger planes and mail carriers needed the improved runways available at a real airport.

In 1925 an informal group of Worcester businessmen and flying enthusiasts began to scout potential sites for an airport in Worcester County. But, as often happens when committees are involved, the plans stagnated. Finally, Whitin Whittall grew impatient with the delays. He used his own money to hire engineers to survey possible sites. Inches Farm field in North Grafton came up at the top of the list. Whittall took out options to purchase the land, then drummed up excitement and support from Worcester businessmen. Within three weeks, the group had the funds to incorporate, and by October 3, 1927, two runways and two hangers were open for business. Whittall Field became Worcester's first airport.

Whitin Whittal succeeded not only in getting the airport built but also in spreading his excitement about flying. On October 12, 1927, the day the airport was dedicated, roads around the airport were jammed for miles. A huge crowd turned out to witness the opening ceremonies and flight demonstrations, including daring maneuvers performed by a female German pilot. A festival atmosphere prevailed, in spite of endless speeches by politicians and dignitaries.

For 18 years, Whittall Field was one of the busiest spots in Worcester County. Until 1945, the field hosted airplanes such as Jennies, Robins, Wacos, Fords, Stearmans, Cubs, and Taylorcraft; special charters brought visiting performers and dignitaries, and pioneers such as Wiley Post made stopovers on around-the-world flights. In the years leading up to World War II, the field was especially busy with the Civil Pilots Training program.

World War II brought major advances in aircraft design, and it became clear that the old farm fields would soon be too small for modern aircraft. On May 4, 1946, a new Worcester Airport was dedicated near the city's west side; commercial service to New York City began a week later. The old Whittall Field was sold for a housing development in 1951.

A huge crowd turned out to witness the opening ceremonies and flight demonstrations, including daring maneuvers performed by a female German pilot

The new airport has experienced ups and downs since opening. In the late 1980s, its six airlines served around 350,000 passengers annually. Deregulation of the airline industry created challenges for the nation's smaller regional airports, like Worcester's. The airport's location over 1,000 feet above sea level also means that it is prone to fog and other dangerous weather conditions that cause serious and expensive problems for the airlines. The airport experienced several years without passenger service due to these challenging landing conditions and other factors. In 2010, Massport, which operates Boston's Logan Airport, acquired Worcester Regional Airport.

Daily passenger service to Florida started in 2013 and upgrades to the landing system are due to be in place by the end of 2017. Local and state officials continue to support and invest in the airport and hopes are that their patience will ultimately lead to increased passenger service.

“Looking for Quiet? Worcester airport might be the place,” by Megan Woolhouse, Boston Globe, March 11, 2016.

Once Told Tales of Worcester County, by Albert Southwick (Worcester Telegram and Gazette, 1985).

On this day in 2001, American Airlines pilot John Ogonowski made the familiar drive from his farm in Dracut to Logan airport. He was sorry he would miss a special event scheduled for later that...