Few archival records related to William Dawes are known to exists, the Massachusetts Historical Society holds a small collection, including an account book acquired in 2010.

Did Dawes make it to Concord?

Dawes limped back to Lexington, not to Concord. We will correct it in the web essay. Thanks for catching the error.
Did Dawes make it to Concord?

Dawes limped back..horseless if my history is correct. And some British sergeant got Mr. Revere's horse. Bad deal all around. The only one who got away mounted was Prescott. Helps to go 'a courtin'!! ------------------------- Ghostrider
Did Dawes make it to Concord?

Dawes and Revere both made it to lexington which is what their original mission was. They decided to continue on to concord with Prescott because they thought that might be the target of the British. "Dawes and Revere arrived at the Hancock-Clarke House in Lexington about the same time, shortly after midnight. In fact, Revere arrived slightly earlier, despite having stopped to speak to militia officers in towns along the way, because his ride was shorter and his horse faster." " After warning Adams and Hancock to leave, Revere and Dawes chose to proceed to Concord in case that was the British column's goal. Revere no doubt knew that the Provincial Congress had stored munitions there, including the cannon Dawes had helped to secure. Along the way, the two men met Samuel Prescott, a local young physician, who joined them. "A squad of mounted British officers awaited on the road between Lexington and Concord. They had already arrested some riders heading west with news of the troops, and they called for Dawes, Revere, and Prescott to halt." " The three men rode in different directions, hoping one would escape. Dawes, according to the story he told his children, rode into the yard of a house shouting that he had lured two officers there. Fearing an ambush, the officers stopped chasing him. Dawes's horse bucked him off, however, and he had to walk back to Lexington." " He later said that in the morning he returned to the same yard and found the watch that had fallen from his pocket. Otherwise, Dawes's activity during the Battle of Lexington and Concord remains unknown." "Dawes and his companions' warning allowed the town militias to muster a sufficient force for the first open battle of the Revolutionary War and the first colonial victory. " The British troops did not find most of the weapons they had marched to destroy and sustained serious losses during their retreat to Boston under guerrilla fire."
Dawes death and burial

William Dawes is believed to have died in Marlboro, and a plaque at the King's Chapel Burying Ground indicates that he is buried there. What is the documentary confirmation of the burial location?
Dawes death and burial

According to the Boston Globe, dated today, Dawes is actually buried in the Forset Hills Cemetery in JP. Might want to read the story for full details. ------------------------- mistero
Fickleness of History

Kind of unfair when you think Paul Revere is the one who gets to ride-off into history and fame, not to mention have a city named after him in Massachusetts, which by the way has a street named Dawes. While William Dawes remains a co-accomplisher yet an unsung hero. Such is the fickleness of history. Thank you for bringing Dawes a measure of fame.
Route Correction

Dawes did not go through Watertown and Waltham. From Brookline he traveled through Brighton, Cambridge, and Menotomy (Arlington) en route to Lexington. (See: http://www.wmdawes.org/map3.html) Also a typo: "He was [a] tanner."
Login

On this day in 1799, William Dawes died. The first man to be dispatched on the night of April 18, 1775, Dawes carried the same message as Paul Revere, but while Revere rowed across the harbor and mounted a horse in Charlestown, Dawes went overland, galloping through Roxbury and Watertown. Both men managed to deliver the warning to Samuel Adams and John Hancock in Lexington. They set off together for Concord, but were stopped by a British army patrol. Revere was arrested. Dawes staged a ruse and escaped. The poet Henry Wadsworth Longfellow later immortalized Paul Revere and his midnight ride. William Dawes, the other hero of that night, died unheralded.

Had he been caught, his mission would have been considered treasonous; he could well have been hanged for it. 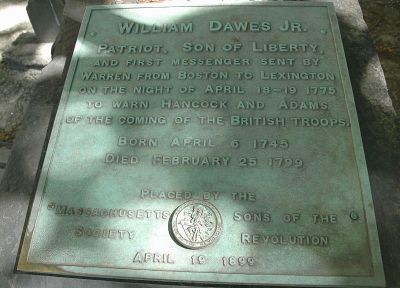 On the night of April 18, 1775, Dr. Joseph Warren, one of the Patriot leaders still in Boston, received intelligence that British soldiers were about to launch a surprise raid on Lexington and Concord. Munitions had been stockpiled in Concord, and Samuel Adams and John Hancock were in residence in Lexington.

Warren tapped two men to ride out and warn the countryside. Thanks to Longfellow's famous poem, every school child knows that one rider was Paul Revere. But the other man, William Dawes, also accomplished his dangerous mission that night.

In April 1775, William Dawes had just turned 30. He lived in the North End with his wife and growing family. Historians aren't sure how Dawes came to the attention of Dr. Warren, but he was a good choice.

Although he had no love for the British authorities, he had not been visibly active in the struggle against the Crown. This meant that, unlike Paul Revere, he was not a marked man. In fact, his frequent contact with Regular soldiers was an advantage. He was tanner, and his business often took him out of Boston. Redcoats on guard duty were unlikely to stop him leaving town. He was also something of a "ham" and could do an excellent imitation of a drunken farmer if he needed to.

Although he had no love for the British authorities, he had not been visibly active in the struggle against the Crown.

Warrren summoned Dawes at 9:00 pm on April 18th and gave him a written message for Adams and Hancock. Later, he would give an identical message to Revere, in the hope that one of the two riders would make it to their destination. The terse warning said simply, "A large body of the King's troops (supposed to be a brigade of about 12 or 1500) were embarked in boats from Boston and gone to land at Lechmere's point."

Dawes set out immediately "mounted on a slow-jogging horse, with saddle-bags behind him, and a large flapped hat upon his head to resemble a countryman on a journey."

There were only two possible routes out of Boston that night. One could cross the narrow strip of land called the Neck that connected Boston to Roxbury or row across the harbor to Charlestown. The Redcoats had both ways carefully guarded, but Dawes somehow managed to elude — or deceive — the guards. Luck was on his side; a few moments after he slipped past the sentries, they received an order that no one was to be allowed out of town.

Luck was on his side; a few moments after he slipped past the sentries, they received an order that no one was to be allowed out of town.

Once Dawes was on his way, Warren directed Paul Revere to row across the Charles River under the shadow of the King's ships anchored there. Both Dawes and Revere faced danger and long odds, but with the men taking different routes, there was a chance that at least one of them might succeed.

While Revere rowed towards the mount awaiting him in Charlestown, William Dawes was riding through Roxbury, Brookline, Watertown, and Waltham. He had to proceed cautiously. The British had stationed patrols along the major road out of the city. Dawes apparently moved silently through the towns on his way to Lexington. Whether by design or because the people living along his route were strangers to him, he spoke to no one between Boston and Lexington. He successfully evaded the British Regulars, which was a good thing. Had he been caught, his mission would have been considered treasonous; he could well have been hanged for it.

Amazingly, both men reached Lexington that night. Revere arrived first, around midnight. Dawes's route was several miles longer than Revere's and his horse slower, so he arrived a half-hour later. Each man delivered Dr. Warren's message to Hancock and Adams, who were staying with the town's minister.

With two Redcoats in pursuit, the quick-witted Dawes decided to try a ruse.

After a brief rest and some refreshment, Revere and Dawes set out together to rouse Concord. They were joined by a local Patriot, Dr. Samuel Prescott. The three stopped at houses along the way, spreading the word. About halfway to Concord, with Revere riding somewhat ahead, they ran into a British army patrol. Revere was taken prisoner. Prescott escaped and rode off to warn Concord.

With two Redcoats in pursuit, the quick-witted Dawes decided to try a ruse. He galloped up to a vacant farmhouse, stopping his horse so quickly that he was thrown to the ground. He jumped up and yelled as if to sympathizers in the house, "Halloo, boys, I've got two of 'em!" Fearing that they were about to confront a large number of angry colonials, the soldiers galloped away. The trick worked. Dawes, whose horse had run off, limped back to Lexington. According to family lore, he retraced his steps several days later to recover the watch he had lost in the spill. Although William Dawes never acquired the fame of Paul Revere, his achievement was not entirely forgotten. Another family tradition has it that when General Washington visited Boston in 1789, he danced a minuet with one of Dawes's daughters. Washington, it is said, expressed admiration for her father's courageous deed.

The Lexington Historical Society interprets several historic sites related to the American Revolution, including the Hancock-Clarke House, where John Hancock and Samuel Adams were staying when they received the news that the Redcoats were heading to Concord.

William Dawes and his Ride with Paul Revere, by H.W. Holland (Privately printed, 1878).

The Siege of Boston, by Donald Barr Chidsey (Crown Publishers, 1966).

Paul Revere and the World He Lived In, by Esther Forbes (Houghton Mifflin, 1942).