Weepin' Willie Robinson is Boston's elder statesman of the blues. The Dorchester singer has seen, heard and sung it all in nearly four decades here. "I started off in Louie's Lounge in Roxbury and then went to the Peppermint Lounge in downtown Boston and the Golden Nugget on Boylston Street," recalled the Atlanta native, who moved here in 1959.

…Before arriving in the Hub, while he was working as a nightclub emcee in Trenton, N.J., Robinson connected with the artist who would influence his style for the rest of his career: B.B. King."I told B.B. that I wanted to be a singer, because the singer gets all the girls," he said, with a laugh. "So he told me to sing and I said I didn't know no songs but two and he said, `Well, come on up and sing 'em!' "At that time B.B. had a 21-piece band . . . I'd never been onstage with that much behind me. Well, I finally got into it and I've been trying to sing ever since."

…"It's the genuine, from-the-heart feeling that Weepin' Willie conveys," said Gary Barcus, a member of Robinson's band. There's nothing phony about him."

… But he hasn't been able to get his own CD recorded.

"Before I die, my life ambition is to get one CD out," Robinson said. "Every time it's looked like it was going to happen, it hasn't, so it's been kind of frustrating. But you try some more."

That disappointment aside, the singer wouldn't change a thing about his life's musical choice. "If I'm down and I hear a good blues tune, man, I feel good," he said.

"I'm not like some people who sing, `Oh, my baby left me,' and all this bad stuff. And I don't pretend to be as great as guys like Bobby `Blue' Bland. But I think I'm one hell of an entertainer. The blues just make me feel good."

According to a recent Boston Globe article, Weepin' Willie Robinson has been living in a Boston homeless shelter between gigs. Friends and fellow musicians have begun a fund for housing Robinson, now 79. You can send contributions in care of Weep's musical partner/manager, Chris Stovall Brown. 4436 Washington St., #3, Roslindale MA 02131 or email: drhepcat@rcn.com
Helping Weepin' Willie

That answers the question that I had after reading the article -- whether Weepin' Willie is still alive. I'm glad to hear that he is, but I'm sorry to hear that he's fallen on such hard times.
Login

On this day in 1926, "Boston's Elder Statesman of the Blues," Weepin' Willie Robinson, was born. Raised in the South, he launched his musical career in Trenton, New Jersey, before coming to Boston in the late 1950s. Although Boston had a much smaller black population than Chicago or Detroit, "all the players came through here." Roxbury, Willie later remembered, was "where it was happening in those days. It was hot." Famous bluesmen played here, and Weepin' Willie sang with them all. In the 1960s Boston was a mecca for the blues, as college students and young folk and rock musicians swelled the audience at the city's clubs. In 2000 the Blues Trust Foundation presented Weepin' Willie Robinson with a Lifetime Achievement Award.

When Willie protested that he only knew four songs and they were all Kings', B.B. King responded, "Then sing 'em." 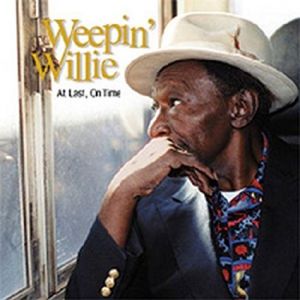 The roots of the blues lie far from Boston in the Mississippi Delta. The blues evolved out of the musical traditions of the plantation to express the alienation and despair of work gangs and prison crews. By the 1890s, African Americans who had become familiar with the music spread the style across the South.

With the mobilization of soldiers from all over the nation, the first World War exposed a huge audience to the blues. In the 1920s, the blues became a national craze. When many rural African Americans moved north during the Great Depression, cities such as Detroit and Chicago became home to urban bluesmen. By the late 1950s and early 1960s, young white American and European musicians had begun to discover the power of the blues. Weepin' Willie Robinson bridged the divide between traditional blues and the electrified rock and roll it inspired.

William Lorenzo Robinson grew up picking tomatoes, potatoes, and beans under the hot sun as a migrant farm worker. After his mother's death when he was ten, he and his father traveled back and forth between Florida and Virginia looking for work. He was 15 when his father sent him to Trenton, N.J. to look for work and live with a family friend; the elder Robinson promised to join his son in a few weeks, but Willie never saw him again.

William Lorenzo Robinson grew up picking tomatoes, potatoes, and beans under the hot sun as a migrant farm worker.

Alone in a strange place, the teenager took a job on a dairy farm, then worked in Trenton as a dishwasher. In 1943 he convinced a recruiter he was 18 and enlisted in the Army. He served for three years.

When the war ended, Robinson returned to Trenton. He felt fortunate to get a job as an emcee at a local nightclub. Here he found his calling. The club booked leading bluesmen such as B.B. King, Jackie Wilson, and Little Richard. They liked Robinson's knack for getting the audience "in the mood." Robinson became something of a personality in his own right. The club owner suggested he adopt the name "Willie the Weeper." Robinson shortened it to "Weepin' Willlie" and used it for the rest of his long career.

B.B. King was especially encouraging of the young performer, urging him to keep singing and develop his own style. When Willie protested that he only knew four songs and they were all Kings', B.B. King responded, "Then sing 'em." One night Robinson was invited to perform with King's 21-piece band behind him. Soon he was fronting a blues combo led by saxophonist Jimmy Taylor. One former manager called him the "Dean Martin of the blues," adding that, "like Martin, he wasn't the greatest singer in the world, but he had that personality that could bring a song across."

One former manager called him the "Dean Martin of the blues," adding that, "like Martin, he wasn't the greatest singer in the world, but he had that personality that could bring a song across."

In 1959 a woman from Louie's Lounge in Roxbury heard Robinson play in Trenton. Willie reported that she approached him after his set and said, "I like your band. Do you want to go to Boston?" "Yeah, we'll go to Boston," he told her, adding, "we've been here ever since."

Weepin' Willie arrived in Roxbury at a critical time in blues history. Urban bluesmen were just beginning to draw large audiences. Boston had a number of blues clubs — Louie's Lounge, Basin Street South, Bing Jim's Shanty. "All those places were up along or right off Washington Street," Robinson recalled. "They're gone now, but it was swingin' back in them days. At Basin Street you had Count Basie and Redd Foxx, and all the big stars in blues. . . ."

The clubs were crowded every night in the early and mid-1960s with black and white fans, especially college students. Boston became one of the country's leading centers of the blues. Weepin' Willie presided over the scene. Noted for his dapper appearance and charismatic personality, he had a commanding stage presence. He sat in with all the blues greats who played Boston and with the rising stars of the new era of electrified rhythm and blues.

In 1999 at the age of 73, Robinson finally released At Last, On Time, his first CD, featuring guest appearances by Mighty Sam McClain and the rising star Susan Tedeschi. In 2000 the Blues Trust Foundation presented Weepin' Willie Robinson with a Lifetime Achievement Award. Robinson died in December 2007.

"A Brief History of the Blues," by Robert M. Baker

Boston Magazine, "Getting the Blues,' by Ted Drozdowski, February 2003.

On this day in 1994, Boston-based rock band Aerosmith opened the Mama Kin Music Hall. In the shadow of Fenway Park, the Lansdowne Street facility enjoyed moderate success as a live music venue before the...