From Flora Stanley's description of the historic drive she and her husband made up Mt. Washington on August 31, 1899:

We went on and up, up, still up, the continuous climbing being varied only by a steepness so excessive that as we looked ahead to it, we felt a sickening anxiety lest each brilliant dash should be our last ... Our engine, panting and quivering, never failed us, but pushed us bravely over seemingly impassable heights.

Springfield, MA is the only place outside of England where Rolls Royce automobiles were built. Production of close to 3,000 Rolls Royce Silver Ghosts and Phantoms were built between 1921 & 1931. The Great Depression brought about the closing of the plant. Additionally, Sprongfield, MA was were the great American motorcycle, the iconic "Indian" was manurfactured.
First Duryea production car purchaser

George H. Morrill of Norwood, MA, bought the first production model automobile from the Duryea brothers. Mr. Morrill was the owner of the Morrill Ink Works and later donor of the Morrill Memorial Library in Norwood, in honor of his daughter, the late Sarah Bond Morrill. The Morrills enjoyed driving about town in their Duryea vehicle, a unique sight in 1896!
Login

On this day in 1899, Newton inventor F.O. Stanley took his wife Flora for a drive — into the record books. Leaving home in a steam-powered Locomobile, built in the Stanley brothers' Watertown shop, the couple motored to New Hampshire and then drove up Mt. Washington — the first time an auto reached the summit of New England's highest peak. The feat was a public relations coup for the Bay State's nascent auto industry. Massachusetts men were making cars that broke speed records, traveling at an astounding — and to some, alarming — speed of 27 miles an hour, and pioneering new technologies. The Midwest would soon become the center of the American auto industry, but it was in Massachusetts that the nation's first gasoline-powered automobiles were produced.

When F.E.'s brother and sister-in-law drove the "Locomobile" up Mt. Washington in 1899, they traveled at an average speed of just under five miles per hour, but the trip was completed in half the time it would have taken a horse-drawn carriage. 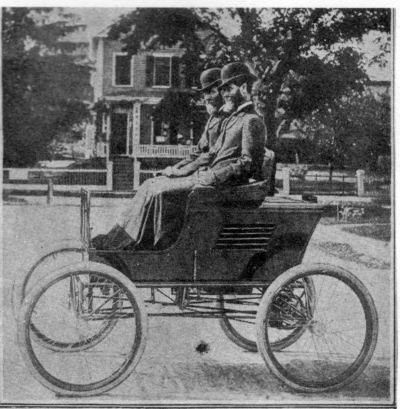 While Detroit has long been recognized as America's car making capital, Massachusetts inventors and entrepreneurs are the largely unheralded pioneers of the American auto industry.

As early as the 1860s, Sylvester Roper of Roxbury tried melding the steam engine and the bicycle. In 1863 Roper successfully demonstrated a prototype that could travel at the dazzling speed of 25 miles per hour. The carriage bench with four wheels was powered by a two-horsepower steam engine. Over the next 30 years, Roper produced nine other steam-driven vehicles, with two, three, and four wheels.

Roper was not the only Massachusetts inventor who dreamed of replacing horsepower with steam power. The Stanley twins, F.E. and F.O., had made a fortune inventing, patenting, and manufacturing the dry plate photography process in their Watertown factory. They retired as wealthy men while still relatively young and began to tinker. Tradition has it that F.E.'s wife worried about mastering a bicycle, so her husband decided to design "something we can ride in side-by-side." Stanley began work on his "steamer" in the spring of 1897. By September his horseless carriage was zooming around Cambridge at an unprecedented 27 miles per hour.

Tradition has it that F.E.'s wife worried about mastering a bicycle, so her husband decided to design "something we can ride in side-by-side."

When F.E.'s brother and sister-in-law drove the "Locomobile" up Mt. Washington in 1899, they traveled at an average speed of just under five miles per hour, but the trip was completed in half the time it would have taken a horse-drawn carriage. In 1906 the Stanley Steamer set the record for fastest mile, traveling in excess of 127 mph at a race in Ormond Beach, Florida.

The public was enthralled, but steam-powered cars would soon belong in museums. While the Stanleys were tinkering in their Watertown shop, two Springfield bicycle makers had a better idea. J. Frank and Charles Duryea saw the potential of a new type of engine being developed in Germany. In the early 1890s the Duryea brothers built a gasoline-powered internal combustion engine that was far more efficient than the Stanleys' steam-powered one. They mounted it on a buggy chassis and added a friction transmission, a low-tension ignition, and a carburetor with a spray gasoline injection system. In September of 1893, Frank Duryea invited a reporter along on a drive in the nation's first gasoline-powered buggy, the "Duryea Motor Wagon." That Springfield-built car is now in the Smithsonian Institution.

In 1906 the Stanley Steamer set the record for fastest mile, traveling in excess of 127 mph at a race in Ormond Beach, Florida.

Having mastered the engine, Duryea was determined to build a vehicle designed from the beginning as an automobile, rather than a converted carriage. The 1896 Duryea garnered worldwide fame by winning what may have been the nation's first auto race. In November of 1895, the Duryea bested a German Benz and four other entries, traveling 54 miles at an average of about seven miles an hour, in open cars, in a Chicago blizzard. The $2,000 prize was nothing compared to the publicity.

It came at a good time, for the Duryea brothers had just incorporated the Duryea Motor Wagon Co. in Springfield — the first company in the country that produced automobiles in quantity and at a profit. In 1896 the shop turned out 13 nearly identical Duryeas, earning the Springfield brothers the title "Fathers of the American Automobile Industry."

The Duryea Co, (which later became the Stevens-Duryea Co.) produced nearly 14,000 cars in factories in East Springfield and Chicopee. Although it had its home in the city that pioneered mass production at the Springfield Armory, the Duryea Co. failed to adopt assembly line systems and interchangeable parts. One local writer recalled "looking into [the factory] windows and seeing the same car, day after day, as the small crew assigned to that car worked to complete it." Only the wealthy could afford to buy a car made this way. When Henry Ford began mass-producing the relatively inexpensive Model T in 1913, it signaled the beginning of the end for the Duryea Co. It went out of business in 1915.

On this day in 1882, seven men took over 12 hours to cover the distance from Worcester to Boston in the nation's first 100-mile bicycle race. Boston was becoming the bicycle capital of America. Pedestrians...