Last Tuesday, one of our Privateers from Beverly [the Hannah from Washington's fleet], having been on a cruise in the bay, was followed, on her return into port, by the Nautilus Man of War. The Privateer ran aground in a cove a little without (beyond) Beverly Harbor, where people were speedily assembled, stripped her, and carried her guns, etc. ashore. The man of war was soon within gunshot, when she also got aground; she however let go an anchor, and bringing her broadside to bear, began to fire upon the Privateer. The people of Salem and Beverly soon returned the compliment from a number of cannon on the shore, keeping up a warm and well directed fire on the man of war for 2 or 3 hours, and it is supposed did her considerable damage and probably killed or wounded some of the men; but before they could board her, which they were preparing to do, the tide arose about 8 o'clock on the evening, when she cut her cable and got off. Some of her shot struck one or two buildings in Beverly; but no lives were lost on our side and the Privateer (was) damaged little if any.

Birthplace of the American Navy.

At least six localities claim the honor to "Birthplace of the American Navy." Said localities are:Beverly, MA; Machias, ME; Marblehead, MA; Philadelphia, PA; Providence, RI; and Whitehall, NY. The Navy recognizes none of them nor any other location. In true diplomatic fashion the Navy is appreciative of the role all played and respects same; however, it has never claimed a locality for birthplace.
Typos

On this day in 1775, General George Washington commissioned Nicholson Broughton captain "in the Army of the United Colonies of North America." Broughton had a novel assignment: The Marblehead man was to be master of the Hannah, the first vessel in what has come to be known as "George Washington's Navy." The General sent eight Massachusetts schooners to intercept vessels supplying British troops in Boston. This little fleet helped persuade the Continental Congress that the new nation needed a proper navy. On October 13th, Congress ordered that two large vessels be fitted out with guns. This is the date that the United States Navy considers its birthday. The Massachusetts schooners that captured 55 enemy ships in 26 months of service belonged to the Continental Army.

. . . once Congress created the Continental Navy and made it legal for privately owned vessels to capture enemy vessels, the small schooners played a less important role . . . 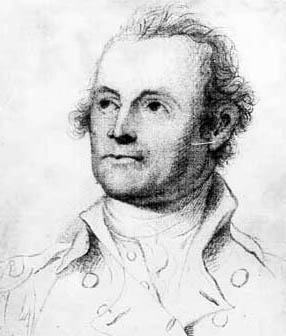 On June 15, 1775, the Continental Congress chose George Washington to command "all the continental forces raised, or to be raised, for the defence [sic] of American liberty." On July 3rd, Washington arrived in Cambridge. Across the Charles River, 6,000 British Regulars occupied Boston. The capital lay under siege, surrounded by 14,000 militiamen. The situation was a stalemate.

With the Battle of Bunker Hill fresh in their minds, the British officers were not about to order an attack. On the other hand, Washington had no illusions that the poorly-equipped colonial soldiers could drive the Redcoats from Boston. He did, however, believe that it might be possible to starve the British out. While the Patriots could receive supplies from the surrounding countryside, the Regulars were dependent on whatever came in by water. Washington saw an opportunity.

The militiamen waiting impatiently in Cambridge included many seamen. One was Colonel John Glover, who commanded a company from his hometown of Marblehead. Born in nearby Salem in 1732, he owned a wharf, a warehouse, and three schooners across the harbor in Beverly, all bought with profits from the West Indies trade. Washington asked Glover to disrupt the flow of supplies into Boston Harbor.

While the Patriots could receive supplies from the surrounding countryside, the Regulars were dependent on whatever came in by water. Washington saw an opportunity.

Glover offered to lease his 78-ton schooner Hannah to the Continental Army for "one Dollar pr Ton pr Month." Washington agreed to the terms, and the colonel selected a crew of 43, most of them men from Marblehead. They would receive army pay and would split amongst themselves one-third of whatever cargo they captured except "military and naval stores . . . which with vessels and apparell are reserved for publick service."

Glover recommended that 50-year-old Nicholson Broughton be put in command of the vessel. With 20 years experience as a captain and intimate knowledge of the New England coast, he seemed to be a good choice, but Broughton was above all an independent-minded sailor in the tradition of Marblehead. Washington would learn that following orders was not in his nature.

The refitted Hannah sailed out of Beverly on September 5, 1775. Washington had instructed Broughton to "cruize against such vessels as may be found . . . bound inward and outward to and from Boston, in the service of the [British] army, and to take and seize all such vessels, laden with soldiers, arms, ammunition, or provisions . . . which you shall have good reason to suspect are in such service."

Broughton was above all an independent-minded sailor in the tradition of Marblehead. Washington would learn that following orders was not in his nature.

Two days later, the Hannah intercepted the ship Unity en route to Boston. Broughton soon learned that Unity's owner was John Langdon, a New Hampshire delegate to the Continental Congress — hardly the enemy. Langdon's vessel, originally bound for the West Indies, carried a cargo of salt fish, beef, and lumber. A British frigate had captured the Unity, and a Royal Navy crew was sailing her to Boston.

Broughton took control of the ship, but rather than returning her to Langdon, he sailed her to Gloucester. Broughton requested a share of the cargo for himself and his crew, but Washington ordered the vessel released and suggested Langdon might reward the Hannah's officers for having recaptured her. Broughton's crew, furious at their captain, mutinied. They were arrested and court-martialed; 14 were ordered whipped but, in the end, only the ringleader was punished.

Broughton assembled a new crew for the Hannah and ventured forth again. On October 7th, he was sailing along the Massachusetts coast when he saw a small vessel. He fired four shots her way, disregarding Washington's orders not to waste ammunition. The noise attracted the Royal Navy's attention.

The Nautilus crew retreated below decks while the colonials shot holes in her hull, sails, and spars.

The captain of the British 16-gun Nautilus caught the schooner near Beverly three days later. Broughton tried to escape but ran the Hannah aground on mudflats in Beverly Cove. The Nautilus came as close as she dared, anchored, and began firing. The Hannah's crew scrambled over the side and made for the shore. The tide kept running out and soon, the Nautilus, too, was aground.

The shooting continued, and soon involved the Beverly and Salem militia. The Nautilus crew retreated below decks while the colonials shot holes in her hull, sails, and spars. After four hours, the incoming tide had the Nautilus afloat once more, and she headed back out to sea. The Patriots' victory was tempered by the fact that the Hannah had rammed the mudflat so hard that her keel was damaged to the point where she would never sail again. Despite Hannah's record, Washington stayed with his plan.

Glover refitted five more schooners and two more were launched from Plymouth. However, once Congress created the Continental Navy and made it legal for privately owned vessels to capture enemy vessels, the small schooners played a less important role, leaving Beverly and Marblehead to argue over which town was the birth of George Washington's, if not the United States', Navy.

Beverly and Marblehead, two communities that lay claim to the birthplace of the U.S. Navy, offer beautiful coastal views and historic charm.