From interview with Tom Curran, photographer for the Lexington Minuteman, conducted on January 26, 1994

Tom Curran: The next morning [May 30, 1971], I came down and took some photographs of them marching down the streets and it was just veterans dressed in battle fatigues…. At that time I found out they were planning to stay on the Green. I had known from events before that week that it was not going to be allowed….

As I remember, they did stop at the Battle Green, and stayed all day. Residents came out and talked with them, and it was very open and very friendly – a bunch of people getting together….

INT: What kind of people came?

TC: … It seemed like a very large cross section that went down there. Some people stopped. Then there were other people who came down and argued strongly with what the veterans were doing….

[T]he Selectmen had offered the VVAW [Vietnam Veterans Against the War] other places to stay. But they wanted the Battle Green. Looking on it from their standpoint and my background in communications, the VVAW had a fantastic news peg. If they got to stay on the Battle Green, they got media attention. If they had gone to the playground on Lincoln Street, they'd be just a bunch of guys walking through town. Maybe a picture in the Minuteman. Nothing in the Boston Globe. Nothing anyplace. I think they saw an opportunity to stay on the Battle Green and they capitalized on it. They were promoting their cause. That's looking at it from their standpoint….

INT: Why was the issue so divisive?

TC: I think the war was divisive. There were demonstrations going on. It's the first war that really came into your living room. I mean, you could sit there having supper and see people jumping out of the back of a helicopter…. Kids who were in first grade saw things myself as a veteran, having been in the army for three years, had never seen! You saw this in your home, which was considered a very safe place. There were a lot of people who were killed. There were friends, relatives, neighbors. I think everyone knew somebody who was killed or wounded over there. I think communication had a lot to do with that. It was the first time communication had been used to the extent it had been, and it bought it very close to home, and people were able to form opinions based on what they saw.

That was most likely an emergency meeting of the Board of Selectmen, not a Town Meeting. There's no way a Town Meeting can be convened that fast, and the decision was certainly within the Selectmen's authority.
"Emergency town meeting"

The claim that all the incumbent Lexington Selectmen lost their seats at the next election is not correct. Allan Kenney was re-elected in his next campaign. In fact he ran unopposed!
Login

On this day in 1971, over 450 anti-war protesters occupied the historic Lexington Green and refused to leave. The Vietnam Veterans Against the War had organized a three-day march from Concord to Boston — Paul Revere's route in reverse. According to Lexington's by-laws, no one was allowed on the Green after 10 PM, so the selectmen denied the protesters permission to camp there. With many townspeople supporting the veterans, an emergency town meeting was held. When no agreement was reached, the veterans and their Lexington supporters decided to remain on the Green. At 3 AM on Sunday, they were all arrested in the largest mass arrest in Massachusetts history. After being tried, convicted, and fined $5.00 each, they continued their march to Boston.

Even people who had doubts about the war felt that it was disloyal to criticize it when there were still American lives being lost. 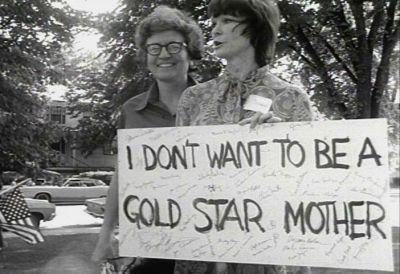 On April 19, 1775, Lexington Green was the scene of a bloody showdown between British Regulars and colonial farmers defending what they believed to be their inalienable right to liberty. Nearly 200 years later, citizen-soldiers once again gathered on Lexington Green. The result was another historic confrontation.

In 1967 a group of six veterans, who opposed U.S. policy in Vietnam and believed that what they themselves had done there was wrong, formed the Vietnam Veterans Against the War. The organization grew quickly. In the winter of 1971, the VVAW held a three-day "Winter Soldier Investigation" at a Detroit motel; over 100 veterans described war crimes they had witnessed or participated in. Twenty-seven year-old John Kerry emerged as a leader of the VVAW. On April 22nd of that year, the future senator and presidential candidate testified at a nationally televised Congressional hearing. Arguing that the war was wrong, he posed the now famous question, "How can you ask a man to be the last man to die for a mistake?"

Growing numbers of Americans agreed with the VVAW and supported an end to the war in Vietnam. In ten years, the conflict had claimed 45,000 American lives. Both politicians and the public were questioning whether the war was winnable; many were also asking whether it was just.

Arguing that the war was wrong, he posed the now famous question, "How can you ask a man to be the last man to die for a mistake?"

There were still a large number of people who believed that the U.S. actions in South Vietnam were necessary to secure the freedom not just of that country but of others in the region that might fall under communist rule, like dominoes, if the U.S. abandoned South Vietnam. Men who were middle-aged by the 1960s had fought in World War II — almost universally perceived as "the Good War." The United States had saved Europe from Nazism and must now rescue Southeast Asia from communism. Even people who had doubts about the war felt that it was disloyal to criticize it when there were still American lives being lost. The nation was deeply divided.

A month after Kerry's testimony on Capitol Hill, the VVAW began planning a march that would begin where Paul Revere had ended his ride. Like Revere, they would "alarm the countryside"— sounding a message that the war was unjust and must end. Nearly 400 veterans, some in wheelchairs, others leaning on crutches, arrived to take part in what they called Operation POW. Over the course of Memorial Day weekend, they would march, sing, distribute flyers, and participate in "guerilla theater," the dramatic reenactment of tactics used against the Vietnamese. All activities would be peaceful. The group requested permits from each town along the route.

In Lexington, the Board of Selectman agreed the VVAW could march through town but denied its request to camp overnight on the Green. Board Chairman Robert Cataldo, a WW II veteran and former POW, feared that the protesters would desecrate the Green with "truckloads of beer and liquor, drugs, etc. It was not acceptable." He added that there was a town by-law that no one could be on the Lexington Green after 10 PM. "The Green is sacred to us, to the country. Rules are rules. That's what we fought for."

"The Green is sacred to us, to the country. Rules are rules. That's what we fought for."

When Operation POW began on Friday night in Concord, the situation in Lexington was still unresolved. The vets camped at Minuteman National Historic Park, and the next morning started walking toward Lexington. They arrived on the Green in mid-afternoon and were joined by over 100 supporters from the town.

An emergency town meeting was held. The selectmen's position was that the marchers must vacate the Green by 10 PM but could camp at a local recreation area. Representatives of the VVAW and their supporters in Lexington insisted that they needed to stay on the Green precisely because it was such a symbolic place in American history. No resolution was reached.

Anyone on the Green after 10 PM would be subject to arrest. The veterans voted overwhelmingly to stay where they were. They decided that committing an act of civil disobedience was justified morally and also strategically, since it seemed likely to draw attention to their cause.

One veteran noted, "The arrest was a guarantee that this was not going to go unnoticed."

At 3 AM on Sunday the police arrived on the scene. They were courteous, and in some cases apologetic, as they arrested the protesters and led them peacefully to waiting buses. For the next two hours, while the bells of the First Parish Church tolled, the marchers were processed and fed at a DPW building. A special session of Concord District Court convened at 10 AM. A judge found over 450 people guilty of violating a town by-law and fined them $5.00 each. After dinner at a local church, the march resumed.

The VVAW had been right: the arrest did generate interest in their cause. One veteran noted, "The arrest was a guarantee that this was not going to go unnoticed."

In Lexington, the division that was revealed so dramatically on Memorial Day weekend took years to heal. What happened on Battle Green prompted an intense debate about civic priorities and the rule of law. At the next election, all the incumbents lost their seats on the Board of Selectmen.

In the early 1990s, a group of Lexington residents decided to collect oral histories from participants in the events that had roiled the town in 1971. The interviews became the basis for a prize-winning documentary, "Unfinished Symphony," made by a filmmaker who was himself one of the VVAW marchers.

Lexington's historic Battle Green is located in the center of town, between Massachusetts Avenue, Bedford Street, and Harrington Road.