Oliver Wendell Holmes's poem "Old Ironsides" was first printed in the Boston Daily Advertiser, at the time when it was proposed to break up the ship as unfit for service. On Tuesday, September 14, 1830, he wrote a letter to the Advertiser:

It has been affirmed upon good authority that the Secretary of the Navy has recommended to the Board of Navy Commissioners to dispose of the frigate Constitution. Since it has been understood that such a step was in contemplation we have heard but one opinion expressed, and that in decided disapprobation of the measure. Such a national object of interest, so endeared to our national pride as "Old Ironsides" is, should never by any act of our government cease to belong to the Navy, so long as our country is to be found upon the map of nations. In England it was lately determined by the Admiralty to cut the Victory, a one-hundred gun ship (which it will be recollected bore the flag of Lord Nelson at the battle of Trafalgar), down to a seventy-four, but so loud were the lamentations of the people upon the proposed measure that the intention was abandoned. We confidently anticipate that the Secretary of the Navy will in like manner consult the general wish in regard to the Constitution, and either let her remain in ordinary or rebuild her whenever the public service may require.

On this day in 1797, USS Constitution was launched in Boston. It took three attempts to set the immense ship, reinforced with heavy diagonal planking and copper sheathing, afloat. Shipyard officials warned townspeople to be prepared for a great wave when she was finally launched, but none appeared. Her greatest moment came during the War of 1812, when in less than 20 minutes her guns turned a British warship into a hulk, not worth towing to port. When British cannonballs appeared to bounce off her thick wooden hull, a sailor exclaimed, "Huzzah, her sides are made of iron!" Ever since, people have referred to the ship by her affectionate nickname "Old Ironsides." Berthed at the Boston Navy Yard, she is the oldest commissioned warship afloat in the world.

The hull of Constitution was made of oak planks more than seven inches thick. 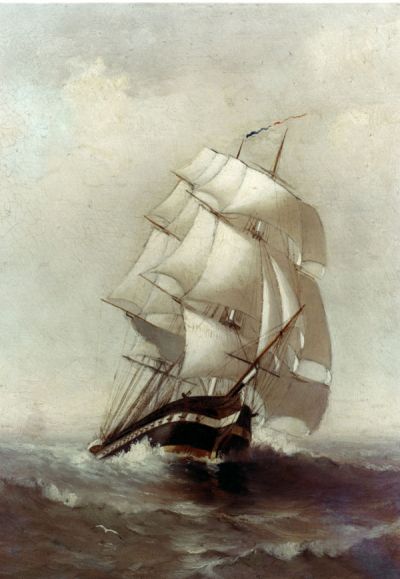 When the United States won independence from Britain, the young nation found itself without a protector at sea. Algerian pirates boarded U.S. merchant vessels, and both Britain and France harassed American ships and forced American sailors to serve in their navies. In 1794 Congress ordered a fleet of six super-sized frigates; each was to be built in a different port. George Washington named the ship built in Edmond Hartt's Boston shipyard, Constitution. The hull of Constitution was made of oak planks more than seven inches thick. The ship was designed with diagonal cross-bracing of the skeleton, greatly increasing the strength of her frame. According to tradition, Paul Revere fabricated the copper spikes and bolts that held the hull and sheathing in place.

All this structural reinforcement made Constitution a formidable opponent at sea. It also made her heavy. When the ship was ready to be launched in 1797, her weight caused great difficulty. On the first attempt, she moved only 27 feet. Two days later, workers tried again but succeeded in advancing only another 30 feet. The next step was to build a launch site with steeper angles. Finally, on October 21st, workers launched the ship into Boston Harbor.

"Huzzah, her sides are made of iron!"

The Constitution is the oldest commissioned warship afloat in the world and was in active naval service for fifty-eight years. In her early years, she was designated the Mediterranean Squadron flagship during the Barbary War between 1803-1805. However, Constitution's most well-known battles were those related to service during the War of 1812.

During her first engagement of the war, while in battle with HMS Guerriere, her guns turned a British warship into a hulk, not worth towing to port, within just a matter of minutes. When British cannonballs appeared to bounce off her thick wooden hull, a sailor exclaimed, "Huzzah, her sides are made of iron!" Ever since, people have referred to the ship by her affectionate nickname "Old Ironsides." Constitution engaged in two more battles during the war, defeating HMS Java on December 29, 1812, and HMS Cyane and HMS Levant in February 1815. The War of 1812 ended in a stalemate with the Treaty of Ghent, signed in December 1814. Following the war, Constitution spent many years as the Mediterranean, Pacific, and Home Squadron flagship.

Over the course of her fifty-eight years of active service, Constitution was involved in thirty-three battles, from which she emerged undefeated.

USS Constitution Museum is on the Freedom Trail in Boston.