University of Massachusetts scientists yesterday announced the births of the first cloned cattle with genetically engineered traits, a breakthrough they say could have great benefits for US agriculture, medicine, and biotechnology.

The feat, accomplished at UMass-Amherst, demonstrates that scientists can introduce new traits into cattle and produce any number of identical animals having these traits, all in one process.

Because cows are far more economically important in this country than sheep -- the animals that have made cloning history in Scotland during the past year -- US scientists had been racing to bring the cloning technology to cattle.

Among the first payoffs are expected to be cows genetically modified to secrete pharmaceutical drugs in their milk — at lower cost, in many instances, than by conventional manufacture. The drugs could be extracted from the milk or even drunk by patients in the form termed "nutraceuticals."

"It's a faster, safer, more cost-effective way of producing pharmaceutical drugs," said Steven Stice, chief financial officer of Advanced Cell Technology Inc., a Worcester-based startup company spun off from UMass. He and James Robl, an animal science professor at the university, are cofounders of ACT. Stice is an adjunct professor at UMass.

In a report to the annual meeting in Boston of the International Embryo Transfer Society, Stice and Robl said that in addition to its use in pharmaceuticals, the technology would be a benefit to the livestock industry. They envision entire herds of identical cattle with improved meat and milk characteristics, or genetic traits making them resistant to various diseases, such as BSE or "mad cow" disease….

The proof of the cow-cloning technology is embodied in two brown-and-white calves named Charlie and George born last week in Texas from embryos created at UMass. Another calf has been born more recently, the scientists said yesterday, and a previously born calf died last fall from congenital abnormalities.

Charlie and George are "the first cloned, transgenic calves in the world," said Stice….

On this day in 1998, two researchers affiliated with the University of Massachusetts drew worldwide attention when they went public with a birth announcement. The new arrivals, named Charlie and George, were genetically-identical Holstein calves. They were produced by new techniques that involved splicing human genes onto cow DNA and then cloning the animals. By cloning an already genetically-altered cow, the UMass team's research could result in a genetically-engineered herd with the potential to produce therapeutically altered milk in large enough quantities to be useful in creating drugs to treat human disease. Less famous than Dolly, the sheep cloned in Scotland, the UMass cows represented a great step forward in the effort to develop medicines using farm animals.

Scientists envision a day when therapeutic proteins will be routinely extracted from milk and purified, then made into medicines that can be swallowed or injected. 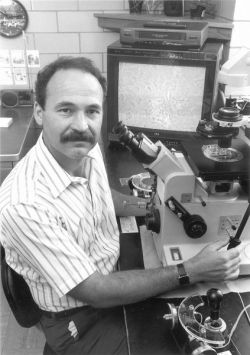 The birth of two genetically identical Holstein calves at UMass made headlines around the world and sparked a debate about the social and ethical implications of cloning. The achievement also recalled the purpose for which the university had been founded in 1867 — "to teach such branches of learning as are related to agriculture and the mechanic arts . . . ."

Like most other state universities, the University of Massachusetts was founded as a land-grant school. In 1857, Vermont congressman Justin Smith Morrill introduced a plan to use income from the sale of federally owned land to create a public college in each state. President Lincoln signed the land-grant bill into law in 1862. Five years later, the Massachusetts Agricultural College opened in Amherst with four wooden buildings, a faculty of four, and 56 students. Just as a majority of Massachusetts residents no longer lived on farms, the curriculum combined "science, and technical courses, and the liberal arts" with "modern farming."

The curriculum and student body expanded and changed over time. In 1892, the college admitted its first female students. Forty years later, industry rather than agriculture seemed to be the future of the state, and "Mass Aggie" became Massachusetts State College. In the aftermath of World War II, as the state's role as a leader in technology grew, so did the university. In 1947, Mass State became the University of Massachusetts. In the 1970s UMass emerged as a major research university.

Robl and Stice's goal was a herd of cows that produced a large enough quantity of "medicine milk" suitable for use by the pharmaceutical industry. 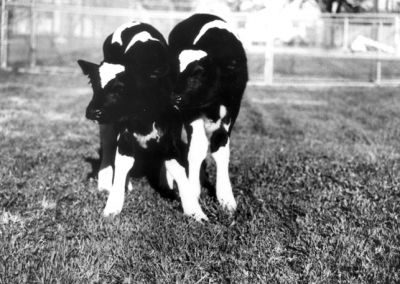 Among the scientists working at the university in the 1990s were James Robl and Steven Stice, whose cloned calves represented a great advance in "pharming." This new field involves the genetic engineering of animals so that they can serve as "drug factories," providing blood, milk, or tissue that can be used to make medicine for treating human diseases.

The UMass researchers' experiment linked two existing technologies. First, they used genetic engineering to introduce human genes into animals that would then have specific new traits. Next, they produced clones of the genetically engineered animals.

Substances such as blood-clotting factors, enzymes, antibodies, vaccines, and other proteins were already being grown and harvested in laboratories, but the process was slow and costly. The fact that mammary glands of farm animals naturally produce a higher density of cells than can be achieved in any laboratory makes genetically-engineered dairy animals worth the trouble of cloning. And cows are preferable to mice, goats, and sheep, because cows produce much more milk than other animals.

Before the UMass breakthrough, each cow embryo had to be altered by hand, a slow, costly, and inefficient process. By cloning an already genetically-altered animal, the UMass team could reproduce the identically-engineered cow many times over. Robl and Stice's goal was a herd of cows that produced a large enough quantity of "medicine milk" suitable for use by the pharmaceutical industry.

Less famous than Dolly, the sheep cloned in Scotland, the UMass cows represented a great step forward in the effort to develop medicines using farm animals.

When George and Charlie were born in 1998, their altered genes had no therapeutic qualities. The genes were merely "markers" that were used to determine whether modified genes could be successfully reproduced in cloned animals.

Four years later, Robl (who had by then left UMass to head a biotech firm), successfully cloned calves that produced human antibodies in their blood. An expert in the field said, "the cows have a human immune system. You can immunize them, collect their blood, get the antibodies out, purify them, and give them to patients."

Pharming researchers anticipate that a broad range of human medicines will soon be available. Scientists are hopeful that pharming will produce cows with modified cells that can be transplanted into patients suffering from Parkinson's, Alzheimer's, Huntington's, diabetes, and other serious diseases.

Pharmers envision a time when therapeutic proteins will be routinely extracted from milk and purified, then made into medicines that can be swallowed or injected. By developing a reliable way of introducing new traits into animals and then producing an unlimited number of exact copies of the genetically-modified animals, the UMass researchers took an important step down the road to better human health. They also added to an ongoing controversy about the benefits and risks of cloning.

For information about visiting the University of Massachusetts-Amherst, visit www.umass.edu/gateway/visit

"Down on the Pharm: The Cloning of Calves with Designer Genes Will Enable Scientists to Turn Farm Animals into Valuable Drug Factories," The Boston Globe, January 26, 1998.

On this day in 1996, the UMass Minutemen ended the winningest season in UMass basketball history. Coached by John Calipari and led by future NBA star Marcus Camby, the Minutemen racked up a 26 game...