THE RUN IS OVER KENTUCKY

TURNS BACK EACH RALLY, TOPPLES UMASS

The University of Massachusetts basketball team, ranked No. 1 in the nation and first in the hearts of New England sports fans, finally went down last night….

The 1995-96 Minutemen were a team of no retreat, no surrender and no regret. In a winter of record snowfall, the Sons of John Calipari gave us a season of utter content. While we were battered by a succession of storms — and bored by mediocre Bruins and bad Celtics — the Minutemen cruised through most of the winter as the nation's top-ranked team

They pushed their cause to the ultimate event, the Final Four. And in their last moment of glory, they cut Kentucky's 15-point second-half lead to 3 in the final minute. But in the end, they could not overcome the blue-chip, blue-ribbon, blue-clad Wildcats. UMass finished its starry season with a lofty record of 35-2.

So now there will be no more storms and no more college basketball for the sports fans of our region. We have prolonged winter long enough and it's time for spring. The Red Sox open their season tomorrow in Texas.

"I was proud of our guys," Coach Calipari said after the defeat. "We gave ourselves a chance to win against a great basketball team. We refused to lose and played hard at the end."

…Calipari's band of warriors was a team that awoke an alumni group that's been too sleepy for too long. UMass fans last night left the arena with their heads held high.

"We showed the country how we play basketball," said Calipari. "When I think of what these young men have done for the Commonwealth, and what they've done for the state system . . . People now are proud to say that our state system is as good as anybody's."

It took a team of players from Puerto Rico, Hartford, Baltimore and New York to bring out this kind of state pride. For the first time in memory, Massachusetts students and graduates are bragging about their university. They are true to their school. And their wonderful team was worthy to the finish."

It bears mentioning that UMASS' season was stripped from the record books because of NCAA rules violations. Marcus Camby was at the center of the controversy.
This didn't happen

It's true! Here's a section from an article written last year by Yahoo! sports writer Dan Wetzel: "While 20 teams were forced to vacate NCAA appearances during the 1990s for use of ineligible players, the two most pertinent cases involve Missouri and Jevon Crudup in 1994 and Massachusetts and Marcus Camby in 1996. Like [former Duke University basketball star Corey] Maggette, both players received payments from either agents or people affiliated with agents. Both rightfully were deemed to have violated the NCAA's standards of amateurism and thus made their teams ineligible for competition.... In March of 1997 UMass turned over its case, and just seven weeks later the NCAA vacated the school's 1996 Final Four appearance, took away 35 victories and asked for restitution of $160,000 in revenue. In both cases, the schools and its coaches were exonerated of any wrongdoing."
This didn't happen

Their entire season was not vacated, just their NCAA Tournament games. As far as the NCAA is concerned, their season record is 31-1.
a correction

Where you have: "helped earn them only their second appearance in the NCAA tournament in 81 years." A correction is needed. UM's 1996 NCAA tournament berth was their sixth, not second. Also, not sure where you're getting 81 years from. The NCAA Tournament started in 1939, so 1996 would have been it's 58th. As far as UM's program history, the 1995-96 season was their 87th.
Login

On this day in 1996, the UMass Minutemen ended the winningest season in UMass basketball history. Coached by John Calipari and led by future NBA star Marcus Camby, the Minutemen racked up a 26 game winning streak. Their ability to press opponents with a superior defense helped earn them only their second appearance in the NCAA tournament in 81 years. Ranked No. 1 in the nation, UMass beat Georgetown to reach the Final Four. The largest television audience ever for a college basketball game watched the Minutemen lose to the Kentucky Wildcats in the semi-finals. Although fans were disappointed, the team had brought unprecedented attention to the University of Massachusetts.

In his eight seasons as head coach, Calipari led the UMass men's basketball team to an overall record of 193-71 . . . 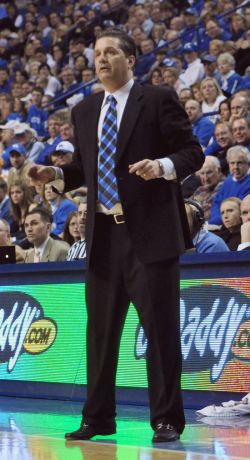 The University of Massachusetts fielded its first basketball team in 1899. Almost a century later, in 1995-1996, the team had the greatest season in modern UMass sports history. With a 35-2 record, the Minutemen made their first appearance ever in the NCAA Final Four.

Led by the National Player of the Year, Marcus Camby, a 6'11' center, and under the guidance of the Coach of the Year, John Calipari, the Minutemen boasted the best half-court defense in the country. Offensively, there was no more cohesive unit than the 1995-96 Minutemen. Double-teamed by defenders, Camby could still find open teammates. Even without scoring, Marcus Camby was such a key player that he soon became the most influential college player in the country.

The Calipari era at UMass was marked by an ability to beat teams on their home courts. On the road, in the single month of December 1995, the Minutemen defeated Maryland, Georgia Tech, Syracuse, North Carolina State, Wake Forest, and Memphis; their 11 non-conference victories brought them the number one ranking in the nation.

The squad experimented by trying new plays in practice and steadily improved its play in games. Camby anchored the UMass Five, but he had a talented group of teammates: point guards Edgar Padilla and Donta Bright, forwards Dana Dingle and Tyrone Weeks, and Carmelo Travieso, one of the better three-point shooters in the East. The Minutemen won by playing under control, going to the right spots to receive passes from Camby and Padilla, taking high-percentage shots and racking up the rebounds.

He transformed a school that had suffered 10 consecutive losing seasons into a basketball powerhouse.

The Minutemen had gone to the NCAA Tournament only once before John Calipari came to Amherst. UMass hired Calipari — a motivational writer and speaker who had served six seasons as an assistant at Kansas and Pittsburgh — in in 1988. He transformed a school that had suffered 10 consecutive losing seasons into a basketball powerhouse. In his eight seasons as head coach, Calipari led the UMass men's basketball team to an overall record of 193-71, still the best winning percentage in school history. UMass won five straight Atlantic 10 Conference regular season and tournament titles.

At the beginning of the 1995-1996 season, Calipari promised that his team would be a force to be reckoned with. During the season, the Minutemen beat much-hyped Kentucky. Boston television stations, which rarely ventured west of Route 495, were suddenly making weekly pilgrimages to the Mullins Center, the Minutemen's home court.

They were not disappointed. The Minutemen compiled a 26-0 record in the regular season before being upset at home by George Washington in February, a mere bump in the road to the Final Four. When the NCAA tournament began, the Minutemen cruised through the first two rounds, including an impressive 86-62 thumping of Georgetown in the East Regional Final in Atlanta. UMass became only the third New England school to participate in the Final Four, the first since Providence College in 1987.

Matched against star-studded Kentucky in the semi-finals, the Minutemen were clearly the underdogs. However, fans' enthusiasm was at an all-time high. Tickets to the game sold for as much as $2500. The stage was set for a dramatic rematch: two exceptional teams, each with something to prove. UMass went into the game feeling under-respected, while Kentucky suited up with all the emotion of a highly-touted team that had been embarrassed by a less-talented foe.

Many who had long ago put away their class rings had them re-sized and wore them proudly.

Kentucky came out strong, building a 15-point lead early in the second half, and it looked as if the Wildcats were going to win easily. But this was UMass. Trailing 54-41 with 10 minutes to play, the Minutemen fought back. With four minutes to go, the Minutemen were down by three, 63-60. Camby scored from inside. Padilla stole the ball and fed Travieso for a score. Suddenly Kentucky was feeling pressure from the UMass defense.

With just under a minute and a half to play, Kentucky's lead was down to four points, and UMass had possession the ball. When the Minutemen missed two shots and had to foul, the Wildcats went to the line. Kentucky pulled away in the final minute, winning 81-74.

During the 1995-1996 season, the UMass basketball team captured the heart of Massachusetts and rekindled alumni affection for their alma mater. Many who had long ago put away their class rings had them re-sized and wore them proudly.

Unfortunately, the memorable 1995 season was stripped from the record books because of NCAA rules violations.

At the end of the 1995 season, John Calipari left UMass for a job as head coach of the New Jersey Nets in the NBA. After three years with the Nets and a season with the Philadelphia 76ers, Calipari returned to college ball as head coach at the University of Memphis.Marcus Camby was the second pick in the first round of the 1996 draft. He began his professional career with the Toronto Raptors and was named to the NBA All-Rookie First Team. He has played for the New York Knicks, Denver Nuggets, Los Angeles Clippers, and currently plays for the Portland Trail Blazers.

The University of Massachusetts Minutemen basketball team play at the Mullins Center on the flagship campus in Amherst.

On this day in 1998, two researchers affiliated with the University of Massachusetts drew worldwide attention when they went public with a birth announcement. The new arrivals, named Charlie and George, were genetically-identical Holstein calves....