SHOT HEARD ' ROUND THE WORLD

How could you figure it? How could you imagine? This team of college kids and enthusiasm beat the best damned hockey team in the world. Locked into the cool-war, cold-war drama of the time, playing against hard-bitten, toothless, virtual professionals, these hard-eyed little boys of the US never backed down. They came from behind. They overcame the age and experience of the Russians, the game situations that seemed to be tilted against them for all of the night, the pressure that certainly could have knocked them silly. They won.

"How did the final 10 minutes feel?" someone asked Dave Silk, the US forward from Scituate.

"It's like the old line about North Dakota, "I spent a week there one afternoon," Silk replied. "The time lasted forever…. The entire last 10 minutes, I felt strange."

"I kept telling myself that if we're going to lose in the end, if the Russians are going to come back— and I've seen them do it a thousand times —then I was going to make sure it wasn't going to be a bad goal," goaltender Jim Craig of North Easton said. "I didn't want anyone to say I was nervous or this or that. I didn't want anyone saying I couldn't play the big games."

The important goal, of course, had been scored by US captain Mike Eruzione of Winthrop, a lovely blue dart of a shot that whistled past Russian goaltender Vladimir Myshkin. Scored at the exact midpoint of the final period, giving the US its first and only lead at 4-3, it was only a hope, an expectation, a possibility. It was like the other US goals in the game, an aberration in the tone of the game, the Russians controlling the puck at least 60 percent of the time, taking three shots to every one for the US kids, a US goal a surprise, a reward for pluck more than domination, a fast about-face before a return to the normal, Russian-controlled buzz.

Hadn't the Russians come back from heavier troubles than this?… Weren't they unbeaten in the Olympics since 1968, since a time when most of these kids were in grammar school?

….The agony of the final 10 minutes, nine minutes, eight minutes, seven, were played on the clock…. Six minutes, five, four, three, "two minutes remaining in the game," the female public-address announcer said and even her voice was shaking. One minute, number by number, all 60 seconds, finished.

The pictures from the end of this game will be saved for a long, long time. These American kids just going crazy, rolling on the ice, throwing their sticks into the stands, rolling, crazy, crying, enjoying. There was drama here, emotion, release, that was bigger than any hockey game, any sporting event, bigger than it ever was supposed to be….

I enjoy reading Mass Moments, but this story fails to even mention the names of the other two players from Massachusetts. Who were they all? Where did they come from? Seems kind of integral to the story.
Login

On this day in 1980, the U.S. hockey team beat Finland to win the Gold Medal at the Lake Placid Olympics. What really captured the country's imagination occurred two days earlier in the semi-finals. The young Americans' thrilling come-from-behind victory over the Soviet Union, remembered ever since as the "miracle on ice," showed that speed and endurance could outweigh experience and technical skill. In a sport long dominated by Canadians and Russians, the victory boosted the popularity of hockey in the U.S. and raised the nation's spirits. Four of the team's players hailed from Massachusetts, including the goalie, Jim Craig, and the captain, Mike Eruzione, who scored the winning goal.

Two days after beating the Soviets the team completed "the impossible dream" by beating Finland 4-2 for the Gold Medal. 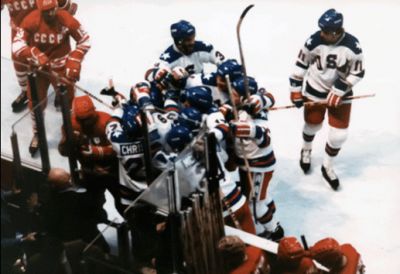 When the US hockey team — a young squad of college players, four of them from Massachusetts — defeated Finland to win the Gold Medal at the 1980 Olympics, the arena in Lake Placid was a joyful place indeed. But the real highpoint of the games and one of the greatest American sporting achievements ever was the improbable come-from-behind 4-3 win over the Soviet team in the semi-finals. This victory was so unlikely and inspiring that it is known as the "miracle on ice."

The modern Olympic movement began in Athens in 1896. The first winter sport to be included was figure skating at the London Olympics in the summer of 1908. Organizers of the 1916 games in Berlin planned to introduce a "Skiing Olympia," but the competition was canceled because of World War I. When the games resumed in 1920, figure skating returned and ice hockey was added as a medal event.

The "magic" of the upset . . . blossomed with the inspired performances of the players, especially the gutsy goaltender Jim Craig of North Easton, Massachusetts, who made 39 saves and kept his team in the game.

The Canadians ruled the Olympic hockey rink through the 1950s. At Squaw Valley in 1960, the Americans upset both the Russian and the Canadian teams to win the Gold Medal for the first time ever. But the feat would not be repeated for another 20 years.

During the 1960s and 1970s, Soviet domination of ice hockey was absolute. Going into the 1980 Olympics, the Americans were, as usual, the underdogs. Seeded seventh out of 12 teams in the first round, they had been routed 10–3 by the Soviet Union in an exhibition game only a week before the games began.

The coach was Herb Brooks, a veteran of two Olympic teams and the coach of the University of Minnesota's powerful hockey team. Known for intense preparation and smart tactical moves, he ensured that what his players lacked in finesse, they made up for in speed and determination.

The "magic" of the upset had its roots in Brooks's coaching but blossomed with the inspired performances of the players, especially the gutsy goaltender Jim Craig of North Easton, Massachusetts, who made 39 saves and kept his team in the game.

. . . team captain Mike Eruzione from Winthrop scooped up the puck and threw a 25-foot wrist shot past the Soviet goalie.

The Soviets came out blazing, out-shot the Americans and took an early 2-1 lead. At the end of the first period, Mark Johnson of Wisconsin scored with a buzzer beater to tie the game. Inexplicably, the Russians replaced their legendary goalie, Vladislav Tretiak, with a lesser backup for the second period. Craig continued to fend off waves of shots, but when one breakaway shot scored, the Russians took a 3-2 lead.

In the final 20 minutes, the speed and endurance that Coach Brooks had drilled into his players gave the young Americans a decisive advantage. The Russian forwards were unable to score again. Eventually, a Soviet defenseman fumbled a loose puck, and team captain Mike Eruzione from Winthrop scooped up the puck and threw a 25-foot wrist shot past the Soviet goalie. The Americans went ahead 4-3 and held their lead for the rest of the game.

It was almost an anti-climax when, two days later the team completed "the impossible dream" by beating Finland 4-2 for the Gold Medal.

A thrilling victory in and of itself, the 1980 win over the Soviet Union took on added meaning. The United States was experiencing inflation, high unemployment, and an energy crisis. The Soviets had invaded Afghanistan, sparking fears of a renewed Cold War. Fifty-two Americans were held hostage in Tehran. The upset victory in Lake Placid affected Americans who had never watched a hockey game before. "The miracle on ice" is part of the country's popular culture. As recently as 2004, Disney made a movie about the team entitled "Miracle," starring Kurt Russell.

On this day in 1956, figure skater Tenley Albright won the Gold Medal at the Olympic Games in Cortina, Italy. This should not have been a surprise, but it was. The 20-year-old from Newton was...