From Know How! The Guide to Making Money with Tupperware...

Betty held up her fingers and started to tick off the wonderful prospects for Tupperware parties: "Every homemaker; working girl, single or married; mixed groups, young married couples... I could go on... clubs, church organizations, sports and fraternal groups..."

Ann broke in, "My goodness! You mean all those have Tupperware parties?"

"Certainly," laughed Betty. "Everyone needs and wants Tupperware. And don't forget your beauty operator, your milk man, your grocer, butcher, service station attendant, your doctor... in other words, everybody you see every day."

Ann added, "What about the P.T.A.? I know some people there."

"Exactly! You're getting the idea. In other words, wherever you go, you will meet people who are prospects for Tupperware parties."

Ann asked, "Well, just exactly how do I get people interested in Tupperware or having parties? How do I interest people who don't know about Tupperware?"

"I always carry a 2-oz. Midget with a seal on it or a Sauce Dish and seal and a catalog with me. A person can't see Tupperware without being interested in it. Oh, and here's another one I didn't mention, trailer parks are among the best spots for Tupperware parties."

On this day in 1907, Earl Tupper, inventor of Tupperware, was born. Raised in central Massachusetts, birthplace of the plastics industry, he was a compulsive tinkerer, inventing, among hundreds of other things, a fish-powered boat. When none of his ventures succeeded, he took a job in a Leominster plastics factory and in 1938 founded his own company. After much trial and error, he came up with the "wonderbowl," which had an airtight "burping" seal. Sales did not take off until a woman named Brownie Wise persuaded him that Tupperware should be sold where it could be demonstrated — at home parties. Thanks to the quality of the product and Brownie Wise's success at mobilizing a sales force of "Tupperware Ladies," the Massachusetts-based company spawned a global enterprise.

The popular stereotype of a "Tupperware Lady" is a white, middle-class suburban housewife. In fact, many were first- and second-generation immigrants living in urban neighborhoods. 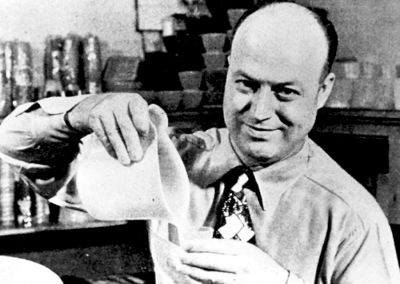 In 1924 Earl Silas Tupper sat in a classroom in Fitchburg, Massachusetts, and dreamed of making millions. "What a time we would have if we had plenty of money," he wrote in a school essay. Tupper was a poor student; in fact, he barely graduated from high school. However, the product he invented, and the woman who created a way to market it, would make him a very rich man.

World War II spurred innovation in the plastics industry, much of it concentrated in the central Massachusetts towns where Earl Tupper's family moved in 1908. After the war, manufacturers were looking to convert their operations to meet peacetime needs. In 1945 Tupper obtained some polyethylene, a plastic Du Pont had developed during the war. He bought molding machines and began to experiment. Many of his first designs were failures, but in 1946 he finally came up with a winner — the "wonderbowl," which had an airtight seal modeled on a paint can.

In 1949 he finally received a patent for the "burping seal." He opened a showroom in New York and began selling Tupperware in department stores. Although the product won design awards, it was slow to catch on with consumers except in Detroit and a few other cities, where sales were booming. He soon learned that Tupperware's popularity in the Motor City was largely due to the efforts of a creative and ambitious saleswoman named Brownie Wise.

Many of his first designs were failures, but in 1946 he finally came up with a winner — the "wonderbowl," which had an airtight seal modeled on a paint can. 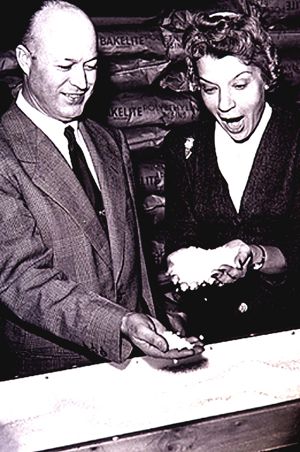 Brownie Wise was a divorced woman in her 30s with a son to support. She often had several jobs at once and supplemented her income as a saleswoman for Stanley Home Products, arguably the first company in the country to use "home parties" for direct selling. Bright, charming, and driven, Wise had an intuitive grasp of how to sell a product like Tupperware, and she knew how to recruit and motivate other women.

Soon after Tupperware went on the market, Wise and Gary McDonald, another Stanley salesman, realized that home parties were the perfect vehicle for selling the plastic kitchenware. One day in 1951, Wise called the company to complain about a late order and insisted on speaking to Earl Tupper himself. She told him that he should pull Tupperware out of retail stores and market the product exclusively through home parties.

Intrigued, he invited her to come to his office in Farnumsville, near Leominster, and hired her on the spot. He split the company into two divisions; he ran the manufacturing side, which remained in New England. Wise took command of the sales division, Tupperware Home Parties. She had moved to Florida and now built a headquarters near her home there.

Selling Tupperware appealed especially to women who had family responsibilities, limited resources, and the aspiration to achieve the American dream.

Earl Tupper was a gifted engineer but a difficult man with no interest in or knack for public relations. Brownie Wise quickly became the face of the company. It was a face that would soon have thousands of followers, who would sell millions of dollars worth of Tupperware.

The Tupperware sales force was made up almost entirely of married women, many of whom had entered the work force during the war and wanted to maintain some of the independence and earning power they had gained. Giving Tupperware parties offered a woman the chance to work, and in many cases, earn good money, on a schedule she could control and in a setting that allowed her to maintain her role as homemaker.

Thousands of women signed on to be "Tupperware Ladies," as the sales representatives were called; they sold as much as Tupper's factories could produce. Selling Tupperware appealed especially to women who had family responsibilities, limited resources, and the aspiration to achieve the American dream. The popular stereotype of a "Tupperware Lady" is a white, middle-class suburban housewife. In fact, many were first- and second-generation immigrants living in urban neighborhoods. Many others lived in rural communities. And not all were white: some were African-American, Asian-American, and Hispanic.

"Brownie gave women the chance to be part of an organization that "pulled out the stops and did everything first class."

Brownie Wise inspired her managers and sellers to work hard and believe in themselves. According to Laurie Kahn-Leavitt, who wrote, produced, and directed the prize-winning documentary "Tupperware!,"Brownie gave women the chance to be part of an organization that "pulled out the stops and did everything first class." At extravagant annual jubilees, she was generous with prizes and praise. She recognized, indeed celebrated, women who got very little of either elsewhere in their lives, and they loved her for it.

As the Tupperware Company grew, Brownie Wise appeared on talk shows, was quoted by newspapers, and was the first woman ever featured on the cover of Business Week. Back in Massachusetts, annual sales were projected to reach $100,000,000, but Earl Tupper was growing resentful of all the attention and credit Wise was receiving. On January 28, 1958, he fired her. She had been a well-paid employee, but always just an employee. When he sold Tupperware later that year for $16,000,000, she got nothing. After her dismissal, Wise started a company to sell cosmetics at house parties. It failed almost immediately, and she lived out the rest of her life in obscurity.

Today, almost 60 years since Tupperware was first introduced to American consumers, the company does business in over 100 countries. It sells plastic Bento Boxes in Japan and Marsala Keepers in India. One can buy the original "burping bowl" at a Tupperware party anywhere in the world, or online, at any time of day or night.

Leominster, Massachusetts, where Tupper based his early operations, was for many years a hub of plastics manufacturing.

The current site of the Blackstone Valley Boys and Girls Club served as a site for Tupperware manufacturing between the late 1950s and 1980s. The site included a 12-acre park for Tupperware employees and their families.

Bob Kealing, author of <em>Tupperware Unsealed: Brownie Wise, Earl Tupper, and the Home Party Pioneers</em>, tells the story of Brownie Wise at the Orlando Public Library on June 14, 2008. The Kitchen Sisters: Tupperware Mental Floss: 15 Tupperware Facts from the Back of the Fridge National Museum of American History: Parties for Plastic