From the Introduction to the first issue.

…Our plan embraces much more than criticism; were it not so, our criticism would be naught….We do not wish to say pretty or curious things, or to reiterate a few propositions in varied forms, but, if we can, to give expression to that spirit which lifts men to a higher platform, restores to them the religious sentiment, brings them worthy aims and pure pleasures, purges the inward eye, makes life less desultory, and, through raising man to the level of nature, takes away its melancholy from the landscape, and reconciles the practical with the speculative powers. But perhaps we are telling our little story too gravely. There are always great arguments at hand for a true action, even for the writing of a few pages….

On this day in 1840 the first issue of the Transcendentalist magazine "The Dial" was published in Boston. The moving force behind this "journal in a new spirit" was Ralph Waldo Emerson, the man who stood at the center of Transcendentalism. The subject of the quarterly publication — the first genuinely original journal published in the United States — was, Emerson wrote, the "state of life and growth [that] is now . . . arriving." The men and women who contributed to "The Dial" were among the best minds of the nineteenth century. The magazine never made money or had more than a few hundred subscribers. It survived for less than four years, but Emerson and his fellow Transcendentalists had unprecedented influence on American culture.

Ralph Waldo Emerson traced his ancestry back through a long line of ministers, including one of Concord's founding pastors. 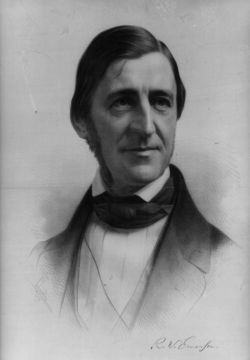 In the summer of 1836, a small group of highly educated men and women living in the Boston area began meeting; they called themselves the Transcendental Club. Each of the members had a slightly different interpretation of what Transcendentalism meant, contributing to the difficulty in defining it. All of them, however, celebrated the worth of the individual and understood there to be a direct link between the human soul and a divine being. They believed a person could know the truth intuitively, transcending knowledge gained through the senses.

Soon Henry David Thoreau, Margaret Fuller, Theodore Parker, A. Bronson Alcott, and other Transcendentalists were gathering at Ralph Waldo Emerson's home in Concord. He quickly became their leader and spokesman.

Born in Boston in 1803, Ralph Waldo Emerson traced his ancestry back through a long line of ministers, including one of Concord's founding pastors. A graduate of Boston Latin School and of Harvard College, he followed family tradition and studied theology and divinity. He was ordained at the Second Church of Boston in March 1829.

Within three years, he resigned, unable to reconcile his personal beliefs with church practices. Ultimately, Emerson's success as a lecturer would enable him to reach far more people than he ever could from a pulpit.

"If we take the good we find, asking no questions, we shall have heaping measures."

A series of personal tragedies marked Emerson's life. When he was eight, his 42-year-old father died of tuberculosis, the scourge of so many families. In 1831, Ellen Tucker, his wife of just 14 months, succumbed to the dreaded disease, as did his brother Charles in 1836. After struggling with mental illness for a long time, his brother Edward also died young. Most shattering of all, his first born son died of scarlet fever at the age of five.

From the time he was a college student, Emerson had recorded his observations and ideas in a journal. In time, he wove the material into essays, poems, and lectures. As one biographer points out, it is his journal, more than his formal writing, that reveals "the depth of his inner struggles."

Despite shattering personal losses, in his published writing he projected an extraordinarily optimistic voice. "If we take the good we find, asking no questions," he wrote, "we shall have heaping measures."

Emerson's career as a lecturer could not have been better timed. In 1826 the first lyceum was founded in Millbury, Massachusetts. Only eight years later, there were 3,000 similar organizations sponsoring lectures, concerts, and other edifying presentations throughout the country. As Emerson traveled across the United States, he drew large audiences of men and women, who came away excited by his ever-evolving ideas and impressed by his fine speaking skills and mastery of the English language.

In later years, when his wife and children would go to Sunday services, Emerson would go for a walk in the woods and meadows of Concord, believing he was more likely to find God there than in church.

Listeners responded to his celebration of individuality — "Insist on yourself; never imitate" — and his provocative statements — "Prayer as a means to effect a private end is meanness and theft." They respected his absolute commitment to seeking out truth — "If we live truly, we shall see truly" — and admired his dignity, forthrightness, and unassuming manner.

He published his first book, Nature, anonymously in 1836. His thesis was that God was to be found in nature. All humans are one with nature, he wrote; we are all united in a whole. In later years, when his wife and children would go to Sunday services, Emerson would go for a walk in the woods and meadows of Concord, believing he was more likely to find God there than in church.

Although Nature sold only 500 copies in 13 years, it was an influential book. Even more provocative was "The American Scholar," the speech Emerson gave at the annual Phi Beta Kappa exercises at Harvard in 1837. "This grand oration," wrote Oliver Wendell Holmes, "was our intellectual Declaration of Independence."

The "American Scholar" appeared in Emerson's first essay collection in 1841. A second volume followed in 1844. Another famous essay, "Self-Reliance," explained the importance of relying on intuition. "Trust thyself; every heart vibrates to that iron string," he wrote; "nothing is at last sacred but the integrity of your own mind."

"Judged by modern standards of journalism, it was an abysmal failure; judged by other standards, it was a first and memorably gallant effort of the mind in America."

From 1840 to 1844, Emerson worked with Margaret Fuller to keep "The Dial" alive. As the scholar Perry Miller wrote, "Judged by modern standards of journalism, it was an abysmal failure; judged by other standards, it was a first and memorably gallant effort of the mind in America."

Emerson had moved to Concord in 1834, and he made his home there for the rest of his long life. Townspeople revered him, inviting him to speak at every celebratory occasion. He became known as the Sage of Concord. A list of the Emersons' visitors would read like a Who's Who of nineteenth-century reformers, writers, and thinkers.

When Ralph Waldo Emerson died on April 27, 1882, church bells in Concord tolled 78 times — once for each year of his life. He is buried on Authors' Ridge in Sleepy Hollow Cemetery.

Daniel Chester French's statue of Emerson is at the Concord Free Public Library.

Concord: Stories To Be Told, by Liz Nelson (Commonwealth Editions, 2002).

On this day in 1810, Margaret Fuller was born in Cambridge. Teacher, author, critic, philosopher, journalist, she is remembered today as a woman with a formidable intellect and a willingness to take risks. One of...