SEABISCUIT FIRST BY NOSE AT EMPIRE

Beats Jesting, With Piccolo Next in Scarsdale Handicap

Privileged and Seabiscuit were the stake winners before 15,000 persons at Empire City yesterday as the split-second occurrences which take place in charging around the turn cost the life of the favorite.

Seabiscuit is the former Wheatley Stable color-bearer, which ran coupled in the betting with Exhibit. And the two brought off fine teamwork together. The pair was held at 12 to 1, after receding from an opening at eights, as few had given the entry much of a chance.

Yet the winner finished in 1:44 for the mile and seventy yards after being shipped in from the River Downs course at Cincinnati for the race. Red Pollard was the winning rider.

The break came after Sgt. Byrne had been placed on the outside for bad behavior. He broke well, as did the other but Wha Hae had the most early food and set the pace around the first turn, closely accompanied by Exhibit, Snow Fox and Sgt. Byrne.

Exhibit forced the pace for his stablemate as far as he was able. This was all through the back stretch to the far turn, where Wright made his move with Snow Fox. At the same time others made their moves.

Exhibit stopped as Jesting went up on the outside and battled Wha Hae for the lead. It was at this point that Snow Fox was hit. He dropped back as if poleaxed, and Jesting went on into the lead.

Then Seabiscuit, coming from far off his stablemate’s and Wha Hae’s pace, also made his charge. Into the stretch they came, with Seabiscuit on the outside and powerful enough to outrun Jesting. Along the fence Piccolo saved ground and closed gamely to get into the picture.

“Seabiscuit by a Nose at Empire: Beats Jesting, With Piccolo Next in Scarsdale Handicap,” by Bryan Field, New York Times, October 25, 1936.

Most folks think of Suffolk Downs being in Boston's neighborhood of East Boston, but a very large portion of the track's property is also in Revere.
Horse Racing in 19C

The story of Seabiscuit and Suffulk Downs is fascinating, but the popularity of horse racing in Massachusetts during the 19th century should not be down played. The fact that there were 300 tracks in Massachusetts by 1900 is testiment to that popularity. Horse trotting and carriage racing were two forms of horse racing that were very popular in the 19th century. Famous horses such as the Old Gray Mare, Dutchman, Flora Temple, and Dexter raced in North Cambridge at the race course which operated from 1837-1855. After the Cambridge course closed, the land was subdivided for residential development. The successor park was the Mystic Park between Main Street and the Mystic River in South Medford. This course opened in 1857 and drew large crowds. It did not close until 1905.
Login

On this day in 1936, Tom Smith, an experienced horse trainer, spied an unlikely looking three-year-old Thoroughbred on the track at East Boston's Suffolk Downs. The two exchanged knowing nods. One year later, Smith returned to Suffolk Downs as the horse's trainer; this time, the awkward looking Seabiscuit electrified the crowd and won the Massachusetts Handicap. At the time, Suffolk Downs was not even as old as Seabiscuit. Massachusetts had only legalized betting on horse races in 1935, as the state looked for ways to raise revenue in the midst of the Great Depression. The track opened a mere two months after the gambling law was passed. In 2014, Suffolk Downs was sold, ending regular Thoroughbred racing at the site in favor hosting races during a specified number of weekends. Live racing ended in June 2019.

. . . horse-racing as an organized spectator sport did not reach New England until the eighteenth century. 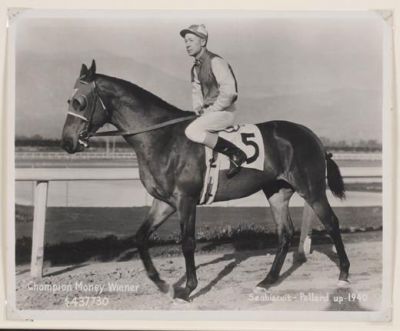 When the Puritans left England for the Americas, organized sport was one of the vices they hoped to leave behind. The Puritans abhorred the blood sports, such as bear baiting and cockfighting, that were popular in Elizabethan England; they were equally opposed to tennis and handball and other activities they believed promoted idleness and frivolity.

Spectator sports of any kind were associated with the evils of theater, gambling, and profaning of the Sabbath. It is not surprising, then, that in its first century, the Massachusetts Bay Colony allowed only useful sporting pastimes: fishing, hunting, and military training. Horse racing fell into this last category, since it improved the performance of both steed and rider who might be called upon to defend the colony. Training days often included horse races between militiamen.

North America's first race track was built on a grassy pasture on Long Island in 1665, but horse-racing as an organized spectator sport did not reach New England until the eighteenth century. Officials worried about the dangers to pedestrians of horse racing on city streets or in village centers, and in 1674, Plymouth Colony prohibited racing in villages. Massachusetts Bay followed a few years later with a law forbidding horse racing within four miles of a town center, but the colony never outlawed horse racing itself.

Neither the racing nor the betting were officially sanctioned, but as long as the crowds were well-behaved, no one was prosecuted.

By the 1730s, Massachusetts spectators were traveling to, and placing bets at, races in Rhode Island. Soon Boston newspapers began to advertise meets to be held a few miles outside the city. Within a few decades, races were being held on several sites near Boston. There was no regular schedule, but the races were advertised well in advance; large crowds gathered to watch and place bets. Neither the racing nor the betting were officially sanctioned, but as long as the crowds were well-behaved, no one was prosecuted.

In the nineteenth century, horse racing increased in popularity and regional rivalries developed. When Virginia and then Kentucky emerged as centers of horse breeding and racing, north-south matches became popular. Even as the craze spread across the nation, no large racecourses were built in Massachusetts. Horse racing here was still limited to county fairs and informal meets.

The sport went into a steep decline with the rise of temperance and other moral reform movements in the early 1900s. The same forces that led to Prohibition lined up against horse racing, where corruption was rampant. One after another, states passed laws against betting on horse races; the number of tracks fell from 300 in 1900 to only 25 by 1908.

Like movies and baseball, horse racing offered diversion to people worn down by the Depression; unlike other forms of entertainment, it also offered the chance to put money in your pocket.

It was the hard times of the 1930s that caused a revival in American horse racing and led to the first permanent large-course racetrack in Massachusetts. Like movies and baseball, horse racing offered diversion to people worn down by the Depression; unlike other forms of entertainment, it also offered the chance to put money in your pocket.

Money motivated state governments, too. Desperate for ways to increase revenues, one state after another lifted its bans on sports betting in exchange for high taxes on racing profits. Pari-mutuel betting, a French practice of using machines to set the odds based on the number of bets placed, eased fears of corruption.

Massachusetts legalized pari-mutuel wagering in the spring of 1935; immediately the Eastern Racing Association was formed and ground was broken for the state's first major racetrack. Only 62 days later, Suffolk Downs opened in East Boston. With its fast racing strip, beautiful landscaping, and concrete grandstand, the $2,000,000 facility was hailed as one of the most modern and attractive in the nation. On July 10th, a crowd of 35,000 turned out for the first race.

Seabiscuit had amassed a losing record in his three seasons of racing and had a reputation for being lazy. But Tom Smith sensed greatness; he leaned over the rail and whispered, "I'll see you again."

One year later, trainer Tom Smith leaned over a fence at Suffolk Downs to watch a small, ungainly horse with an awkward gait. Despite the horse's lack of obvious advantages, Smith liked what he saw. Seabiscuit had amassed a losing record in his three seasons of racing and had a reputation for being lazy. But Tom Smith sensed greatness; he leaned over the rail and whispered, "I'll see you again."

And indeed he did. He persuaded wealthy California horseman Charles Howard to buy Seabiscuit. Under the care of Smith and a talented jockey named Red Pollard, the hard luck horse became a national sensation. Hundreds of thousands gathered by their radios to hear Seabiscuit run against and beat far more promising horses. On July 7, 1937, Seabiscuit bested a field of 12 in the third running of the Massachusetts Handicap at Suffolk Downs. Seabiscuit went on to a heart-stopping career that lifted the hearts and spirits of Depression-era America.

In June 1936 [Tom] Smith arrived in Massachusetts. He traveled from track to track, looking at hundreds of cheap horses, but he couldn't find the one he sought. On the sweltering afternoon of June 29, at Boston's Suffolk Downs, the horse found him.

The colt was practically sneering at him. Smith was standing by the track rail, weighing the angles and gestures of low-level horses as they steamed to the post, when a weedy three-year old bay stopped short in front of him, swung his head high, and eyed him with an arch expression completely unsuited to such a rough-hewn animal. "He looked right down his nose at me," Smith remembered later, "like he was saying, "Who the devil are you?" Man and horse stood on opposite sides of the rail for a long moment, sizing each other up. An image materialized in Smith's mind: the Colorado ranges, a tough little cow horse. The pony boy leading the colt to the post tugged him on his way. Smith watched the animal's rump swing around and go. Thin, yes, but he had an engine on him.

Racing Through the Century: The Story of Thoroughbred Racing in America, by Mary Simon (Bowtie Press, 2002).

International Museum of the Horse

On this day in 1980 Rosie Ruiz tried to steal the Boston Marathon. Crowned the women's champion when she crossed the finish line, Ruiz looked surprisingly well-rested for someone who had just run 26.2 miles...