Tip O'Neill Elected Speaker of the House of Representatives

1. Vote your conscience, your country, your district, the leadership, in that order.

2. Never question the honesty or integrity of a colleague.

3. It's a round world – what goes around, comes around.

4. You can accomplish anything if you let someone else take the credit.

6. Lead by consent, not demand.

7. The bigger the crowd, the lower the vote.

11. Never speak of yourself in the third person.

12. Tell the truth the first time and you don't have to remember what you said.

13. The horse that runs fast early fades in the stretch.

All Politics is Local and Other Rules of the Game, by Tip O'Neil (with Gary Hymel) (Random House, 1992).

There's a Tip quote that deserbves to be in his Mass Moments. I don't have it exactly but let me try to paraphrase. He was asked if he would consider a run for president. "No," he said (I think)" I'd rather be a sparrow on a lamppost in" (I forget the name of the place "square in Cambridge."
tip o'neill

xmccarthy, I think the place you're referring to is: "Barry's Corner." This is the location in Tip's neighborhood where he and his friends would meet, or in today's jargon: "hang out."
Tip O'Neill's political resume.

It should also be noted that Tip O'Neill was elected to a two year term on the Cambridge School Committee.
Speakership longevity record.

The article states Mr. O'Neill was the longest serving Speaker at 10 years (to be technical 9 years and 364 days). It should note that was for continuous service. The actual record for longevity as Speaker belongs to the late Sam Rayburn, D. TX. Mr. Rayburn served as Speaker three different times for a total of 17 years and approximately one month.
Speakership longevity record.

Even if the Mass. Foundation for the Humanities didn't "encourage visitors to contribute their questions, comments, and observations," one would think that, given their vision of Mass Moments as an educational and historical resource, they would welcome opportunities to correct inaccurate information. As Zinc points out, O'Neill was not Speaker for "longer than any other individual has held that post." Why not correct the text?
Storied Congressional Seat.

The Congressional District that elected Tip has a lot of 20th century celebrity/history to it. This same seat, at various times, was held by such notables as: an Elliot (the grandson of a Harvard President), James M. Curley, John F. Kennedy, Tip O'Neill, and Joe Kennedy II (President Kennedy's nephew).
Login

On this day in 1977, Thomas P. "Tip" O'Neill was elected Speaker of the U.S. House of Representatives, a position he held for the last decade of his political career. As a congressman and as Speaker, O'Neill followed his conscience. He was one of the earliest opponents of the Vietnam War, freely criticizing the policies of a president from his own party. He was instrumental in the Watergate hearings and in the eventual resignation of President Nixon. O'Neill succeeded in pushing through reforms in the legislative process that made lawmakers more accountable to their constituents. He introduced TV broadcasts of House proceedings and opposed the Pentagon's support for Nicaragua's Contra rebels. In 1991 President George Bush awarded him the Presidential Medal of Freedom for serving the public steadfastly for 50 years "while maintaining his humor, humility and touch with the people."

When Tip O'Neill graduated from high school in 1931, he did not go to college; he got a job driving a truck. 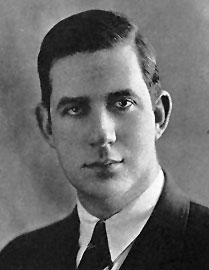 Thomas P. O'Neill, Jr. known by almost everyone as "Tip," first ran for public office when he was still a college student. He lost his bid for a seat on the Cambridge City Council, but he learned two lessons that stayed with him for the rest of his life.

On Election Day, a neighbor told him that she would vote for him, "even though you didn't ask me." When O'Neill protested that he had known her since he was a child, had shoveled her walk and cut her grass, and didn't think he had to ask for her vote, she replied, "Tom, let me tell you something. People like to be asked." The next day, O'Neill's father ascribed the loss to Tip's failure to work hard enough in his own neighborhood. His advice became his son's motto: "All politics is local." Tip O'Neill never forgot these lessons, and he never again lost a campaign.

He was born in 1912 into an Irish-American family in North Cambridge, the neighborhood he called home for his entire life. His father, Thomas O'Neill, Sr., was a former bricklayer who had worked his way into a white-collar civil service job. The elder O'Neill was active in his union, his church, various community associations, and, perhaps most importantly for his son, the local Democratic Party. He was widely respected in the Irish-American community. Tip idolized his father; even after his death in 1953, Tip continued to use the suffix "Jr." to honor his memory.

Tom O'Neill, Sr. valued education, and his children received the best he could provide. His oldest son graduated from Holy Cross College and won a scholarship to Harvard Law School; his daughter became a teacher and, eventually, the first female principal in the Cambridge public school system. Tom attended St. John's High School, but he readily acknowledged that he was not the scholar his brother was. He had a gregarious personality, and an unquenchable appetite for sports, buddies, and card games. As he grew, his six-foot-four-inch frame helped him excel at football. He also loved playing and watching baseball, basketball, and golf. He earned his nickname imitating baseball great Edward O'Neill who was famous for hitting foul tips until he was walked. When Tip O'Neill graduated from high school in 1931, he did not go to college; he got a job driving a truck.

His advice became his son's motto: "All politics is local." 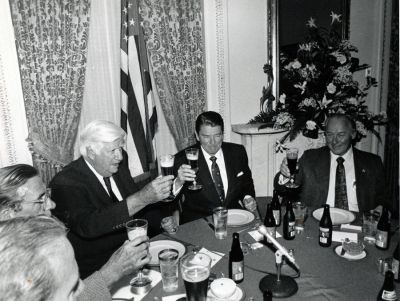 Eventually, a former high school teacher persuaded him to continue his education. Although he had not been a strong student, he had shown a gift for debate; one nun on the St. John's faculty remembered that as debate captain he could "talk you deaf, dumb, and blind." In the autumn of 1932, at the age of 20, Tip O'Neill entered Boston College.

Jesuit priests founded the college in 1863 to provide higher education to young Catholic men who were excluded from the Brahmin-dominated private colleges. By the 1930s, its students were almost entirely men of Irish descent who commuted to the campus from their homes in Boston and its suburbs. During his four years at BC, O'Neill rowed crew and fenced, but he devoted much of his extracurricular time to Cambridge politics. His senior class voted the affable, humorous, approachable O'Neill "Class Politician." After graduation, he stayed in North Cambridge and took a job with an insurance company.

In 1936 O'Neill ran for the state legislature. Applying the lessons he had learned from his unsuccessful campaign for city council, O'Neill developed a political style that would characterize him for life. He embraced the concept that all politics is local — and that all politics is personal.

As his longtime friend and colleague U.S. Representative Joe Moakley recalled many years later, "He was a fellow who loved people and he knew everybody." O'Neill not only knew his constituents, he knew their needs; he was genuinely committed to improving their lives and protecting their interests. O'Neill held elected office for next 49 years. He served 15 years in the state legislature and 34 years in the U.S. House of Representatives.

"He was a fellow who loved people and he knew everybody."

O'Neill was a consummate politician. His personal trademarks — his shock of unruly white hair, wide grin, broad Boston accent, and rumpled suits — may have made him easy to caricature, but Tip O'Neill was a serious and skillful politician. One reporter noted that O'Neill was best behind closed doors, "unsticking the frozen gears of government by sheer force of his powerful personality."

His colleagues in the Massachusetts House and later in Congress recognized that O'Neill had a genius for getting things done; both bodies elected him Speaker. Tip O'Neill occupied the powerful position of Speaker of the U.S. House of Representatives for a decade and used the Speakership as a bully pulpit for the causes he cared about.

From the beginning of his career, O'Neill impressed his colleagues and constituents with his integrity. In the wake of the Red Scare, the Massachusetts legislature passed a bill requiring teachers to take a loyalty oath. O'Neill believed that the oath violated teachers' civil liberties, and he knowingly incurred the wrath of the American Legion by voting to repeal the law. His courageous act furthered his reputation both as an independent thinker and as a man who made his decisions based on principle rather than on what was politically popular.

One reporter noted that O'Neill was best behind closed doors, "unsticking the frozen gears of government by sheer force of his powerful personality."

In Congress, O'Neill continued to follow his conscience. He was one of the earliest opponents of the Vietnam War, freely criticizing the policies of a president from his own party. He was instrumental in the Watergate hearings and in the eventual resignation of President Nixon. He succeeded in pushing through reforms in the legislative process that made lawmakers more accountable to their constituents. He introduced TV broadcasts of House proceedings. He opposed the Pentagon's support for Nicaragua's Contra rebels.

O'Neill came of age during the Depression and was deeply committed to the New Deal approach to politics. He believed that government should take an active role in fighting poverty and injustice. He led the fight against Reagan-era budget cuts and was derided as a "tax-and-spend" liberal by conservative Republicans.

Tip O'Neill might have lived by the axiom that "all politics are local," but he was a national figure. In 1974, during the Watergate hearings, he appeared on the cover of Time magazine. In 1991 President George Bush awarded him the Presidential Medal of Freedom for serving the public steadfastly for 50 years "while maintaining his humor, humility and touch with the people."

At his death in 1994, O'Neill was eulogized as one of the twentieth century's most gifted politicians but also as a man who never forgot where he came from. As his North Cambridge neighbors said, "His hat still fit."

Tip O'Neill and the Democratic Century, by John A. Farrell (Little Brown and Co., 2001).