The Stockholm Rams the Andrea Doria

The Andrea Doria was listing badly but still afloat, with her passengers and crew being removed, at 4 this morning.

Two hundred were taken aboard the vessel Cape Ann, 200 had been transferred to the Isle de France, some 50 are aboard the Army vessel Thomas and 425 on the Stockholm.

The liner Stockholm reported “three serious casualties” and asked for a helicopter to remove them.

Two crack ocean liners collided in fog 45 miles southeast of Nantucket late last night and most of the 1700 passengers and crew of the Italian Line’s Andrea Doria had abandoned the listing ship by 3 this morning.

The SS Stockholm, her bow shattered and taking water in forward holds, was limping toward New York at slow speed, four hours after the crash.

Passengers and crewmen of the 27,000-ton Doria were transferred to the liner Ile de France and the fruit ship Cape Ann in those vessels’ lifeboats after the Doria’s were rendered useless by the heavy list.

Coast Guard craft and fishing vessels were standing by the stricken liner, speeding removal of the remainder of her crew as the danger of the vessel’s sinking increased.

The crash occurred shortly after 11 p.m. SOS messages were sent from both the Andrea Doria and Stockholm at 11:22 and the bigger liner’s passengers began abandoning ship at 2:22 am.

Another source for further reading focused specifically on this topic is "Alive on the Andrea Doria," by Pierette D. Simpson (hardcover; Purple Mountain Press, 2006).
Sinking of Andrea Doria

Thanks for this account. I well remember the old black and white newsreel coverage of the event which - as I remember dealt only with the actual sinking. I'd never known anything of what preceded it or that there had been the substantial loss of lives. Did the sinking of the Andrea Doria result in any songs or poetical effusions? ------------------------- Jim Cooke
Login

On this day in 1956, two ocean liners collided in thick fog, approximately 50 miles south of Nantucket. The Stockholm had just left New York City bound for Sweden. The Andrea Doria was due to arrive in New York at 9:00 o'clock the following morning. The three-year-old Italian liner was not only one of the most luxurious vessels afloat but was considered the safest. She had the latest radarscopes and was built with watertight compartments. Nevertheless, 11 hours after the Stockholm rammed her broadside, the Andrea Doria capsized and sank in 225 feet of water. Thanks to one of the most remarkable rescues ever conducted at sea, all of the 1,706 passengers and crew who survived the collision made it safely back to land.

Fifty-one lives were lost as a result of the collision, 46 on board the Andrea Doria and five on the Stockholm. 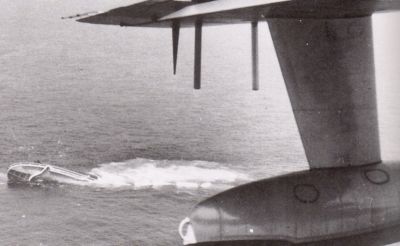 Eight days later, the Andrea Doria was in the busy shipping lane south of Nantucket, an area prone to thick fogs. The captain cut back his speed by one knot and posted extra lookouts. The crew kept a close eye on the radar screen. The Stockholm had sailed from New York earlier that day in perfectly clear weather, and she traveled at full speed; but when the vessels met just before midnight, both were shrouded in heavy fog.

No one will ever know for sure what happened next. The official inquiry into the accident was inconclusive. Radar technology in the 1950s was not as sophisticated as it is today, and the men in command of the ships appear to have misinterpreted what they saw on the screen. The Stockholm was traveling outside the lane normally used by northbound vessels. To ensure wide clearance, the master of the Andrea Doria chose to pass her on the starboard [right] side rather than the customary port [left] side.

In a series of tragic mistakes, with lights obscured by the fog, both captains turned their vessels in the wrong direction as they tried to keep a safe distance.

Traveling at close to full speed, the ships did not see each other until they were just one mile apart. In a series of tragic mistakes, with lights obscured by the fog, both captains turned their vessels in the wrong direction as they tried to keep a safe distance. By the time they recognized the danger, it was too late. The Andrea Doria could not get out of the way of the ship bearing down on her.

At 11:10 p.m., the Stockholm's bow struck the Italian liner at her most vulnerable place, ripping open seven of Andrea Doria's eleven decks and rupturing her fuel tanks. The 50-foot-wide gash destroyed two of the watertight compartments. Fifty-one lives were lost as a result of the collision, 46 on board the Andrea Doria and five on the Stockholm.

The ships separated, and water rushed into the giant gash. Since the Andrea Doria was near the end of her voyage, her fuel tanks were close to empty. As water rushed in to the starboard tank, the vessel began to tip. She was designed so that she could list up to 15 degrees. Less than five minutes after the collision, she was listing at 20 degrees. Very quickly, her engineers realized they could not right the ship. It would only be a matter of time before she went down.

Lifeboats on the port side could not be swung off the deck because the vessel was tipping so far over to the other side. The remaining lifeboats could only accommodate 1,004 of the 1,706 people on board. Immediately, the captain sent out an S.O.S. In a time-honored tradition, vessels of all types responded. A cargo ship, the Cape Ann, equipped with two lifeboats, was closest. She covered the 15 ½ mile distance in 30 minutes as messages from Andrea Doria kept coming: "Impossible to Put Lifeboats at Sea," "We Need Boats," "Need Immediate Assistance." The French ocean liner, Ile de France, changed course and headed for the scene, too.

At 12:15, the captain of the Andrea Doria sent a message to the Stockholm: "You Are One Mile From Us. Please, if Possible, Come Immediately to Pick Up Our Passengers." As soon at the captain was sure that the Stockholm was not in danger of sinking from the damage to her bow, he ordered most of her lifeboats into the water.

The fog began to lift as the Cape Ann's lifeboats went back and forth taking crew and passengers off the Andrea Doria; by the end, there were 168 additional people on board the small cargo ship. The Ile de France arrived, anchored 400 yards away from the wreck, turned on all her lights, and projected searchlights over the area between them. Then the crews of the French and Swedish ships evacuated hundreds from the doomed liner. Finally, at 5:30 in the morning, the captain and the last 11 members of the crew abandoned ship. The total number of casualties was 46.

Four hours later, the Andrea Doria capsized; at 10:09, she sank. The rescuing vessels made their way to New York harbor, including the damaged Stockholm, which limped back, escorted by two Coast Guard cutters.

. . . while no one drowned as a result of the 1956 collision, several divers have died exploring what many consider the "Mt. Everest" of diving.

Lying in relatively shallow waters, the wreck of the Andrea Doria has been a lure to divers since the day after she sank. By now, most of the ship's contents have been looted. Her name is still visible on the hull, and divers can swim into her dining room, cocktail lounge, and several staterooms. She sits in an area of treacherous currents, however, and while no one drowned as a result of the 1956 collision, several divers have died exploring what many consider the "Mt. Everest" of diving.

The loss of the Andrea Doria came as the age of the great ocean liner was passing. By 1958, 70 percent of travelers crossed the Atlantic by plane. Within ten years, only five percent made the trip by sea. One by one, the stately ships were either converted to cruise ships, occasionally to restaurants, or, more often, scrapped. Renamed the MS Athena, the 100-year-old Stockholm still carries passengers on holiday cruises.