CLEWS TO SPARE, BUT NO CODFISH

Missing–one fish-shaped piece of pine wood, four feet 11 1/2 inches in length, covered with silver coating. Intrinsic value: none. Historical value: priceless. Known the world over as the immortal and sacred cod of Massachusetts.

Scouring the highways and byways of Greater Boston, with their paths definitely converging at Cambridge, State detectives last night continued their frenzied search for the hallowed sacred cod, stolen from the very hall of the Massachusetts House of Representatives sometime between 5:15 and 8 pm Wednesday night–the first time for 30 years and more that mortal hands had ever touched the emblematic effigy of the first industry practiced in this country by the white man.

What has happened to the sacred Cod?….For one thing, Lieut. Detective Joseph L. Ferrari of the State Police had in his possession information that telephone inquiries had been made of Cambridge box factories regarding the sale of a paper box at least five feet in length. He soon traced this angle down until he had a good lead to follow–and the path led, he said, not far astray form collegiate circles.

Ferrari, on the obvious theory that fraternity activity might have sponsored the theft, directed part of his evening's work in talking with Harvard students, after he had obtained from both the Lampoon and the Crimson editors a flat and emphatic denial that they were connected in any way with such "a dastardly deed as stealing the cod"….

….At least two sections of the General Laws of this State provide penalties for stealing the codfish. Meeting for the first time since 1895 without the presence of the emblematic effigy, the House of Representatives yesterday stared at the vacant space over the clock and then poured into the law books, seeking all possible court action against the culprits….

Not in months has the hall of the Massachusetts House attracted so much attention as it did yesterday. Crowds poured along the fourth-floor corridor throughout the day, seeking to view the spot where once hung the cod in all his silver glory….

At least two youths were implicated in the theft of the cod effigy. There seems to be no doubt in the minds of the police that "the assault against Massachusetts' most hallowed replica" was carried out by the 6-foot youth who was seen lounging about the fourth floor corridors late Wednesday afternoon with a long box under his arm. Lillies were protruding from one end of this box, as if to give an excuse for the presence of the extremely over-sized parcel…

State detective Frank Hale was working on this and other angles last night, and it was his belief that college students, eager for a prank comparable with the Bank of England excavation hoax or the 5th-av traffic tieup stunt, were responsible for the theft.

"Or, maybe, it was a couple of students who had nothing else to do," he said….

Does anyone know who carved the present cod displayed in the House Chamber? It was Representative John Rowe who made the motion to have a third cod fish hang in the house chamber. However, who carved it still remains a mystery. Interestingly, John Rowe was a wealthy merchant and colonial era developer. One of his developments was Boston's famous Rowes' Wharf. Additionally, he smuggled various items of commerce by doing business with forbidden ports. He also aided in inciting the Stamp Act Riot of 1765. One of his ships the, Eleanor, was involved in the Boston Tea Paty.
Fix Bulfinch's Name Already!

It's been 4 years since it was pointed out that you called Charles Bulfinch "Samuel." (You can refer to the 12/18 Moment about Bulfinch if you need to.)
Login

On this day in 1798, the Massachusetts legislature paraded solemnly from the Old State House to its quarters in a new building at the top of Beacon Hill. Designed by Boston-born architect Charles Bulfinch, the elegant new State House was tangible evidence of the Commonwealth's growing prosperity. The men who governed Massachusetts were thinking of the state's promising future, but they brought with them a symbol of the past. They carried a four-foot, eleven-inch wooden fish wrapped in an American flag. This "Sacred" Cod had hung in the Old State House, and it hangs in the new one to this very day. There is no better symbol of how much Massachusetts owes both its survival and its success to the humble cod fish.

The Massachusetts Senate has a "Holy" Mackerel incorporated in tis chandelier to compete with the "Sacred" Cod in the House of Representatives. 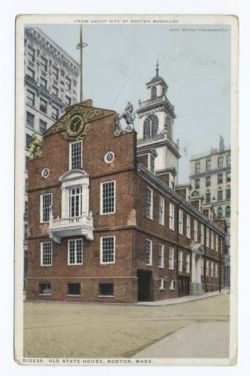 People who visit the House Chambers in the Massachusetts State House may be surprised to find that the place of honor is held by a wooden fish. It is the "Sacred" Cod, a 4' 11" piece of solid pine that symbolizes the debt the state owes to the fish that was key to its survival and success.

It was for cod that mariners first ventured across the Atlantic to Iceland, Canada, and then New England. The coast of North America was literally churning with codfish that were bigger and more plentiful than Europeans had ever seen before. The seemingly inexhaustible cod fishery was a mainstay of the Bay Colony's economy from the very beginning. In 1640, Massachusetts fishermen brought 300,000 cod to market.

The demand for cod was strong in both the New World and the Old, as it was a staple in the diet of the poor and the enslaved. The cod trade was an important source of the cash New Englanders needed to buy European products. Shipping dried cod fish to feed enslaved African and Native American workers in the West Indies was so profitable that a group of Bostonians, known somewhat derisively as the "codfish aristocracy," became rich.

The Old Statehouse, where a cod first adorned the chamber of the legislature

It is no surprise then that the humble codfish became an emblem of civic pride. A carved cod has hung in the seat of Massachusetts government at least since the early 1700s. The one that currently hangs in the State House is most likely the third "Sacred" Cod.

The first cod was hanging at the Old State House until it was destroyed in a fire in 1747. It was soon replaced with another, but that one disappeared during the British occupation of Boston early in the Revolution. At the end of the war, the new Massachusetts legislature took up the matter of the missing cod. In 1784, it was moved that "leave might be given to hang up the representation of a Cod Fish in the room where the House sits, as a memorial of the importance of the Cod-Fishery to the welfare of this Commonwealth, as had been usual formerly." A new fish was duly carved and installed in the House chambers later that year.

On January 11, 1798, a stately procession moved from the Old State House to the recently completed new one. The "Sacred" Cod, wrapped in an American flag, was carried to its new place of honor. When the House outgrew its quarters in 1895, the Cod moved with the House to its new chamber. There it has remained, except for a few days in the spring of 1933.

A 4' 11" piece of solid pine that symbolizes the debt the state owes to the fish that was key to its survival and success.

In April 1933, the Harvard Lampoon staged a prank later known as the "cod-napping." The first step was to distract the Lampoon's arch rival and watchdog, the Harvard Crimson. On April 26, members of the Lampoon abducted a Crimson staffer. With the outraged Crimson men intent on finding their missing colleague, the Lampoon crew turned its attention to the Cod.

The plan was simple. Three members of the Lampoon pretending to be tourists walked into the State House with wire cutters and a flower box. When no one was looking, they snipped the wires from which the fish was hanging, hid it in the flower box, and left the building.

It was for cod that mariners first ventured across the Atlantic to Iceland, Canada, and then New England.

When authorities discovered that the fish had disappeared, the city went wild. Rumors and speculation abounded, while the police chased down leads that turned out to be red herrings (a different fish altogether). The newspapers decried the theft, the state police were called in to assist, and the Charles River was dredged. Declaring that they could not legislate without their cod, the members of the House devoted themselves to debating what charges should be brought against the culprits.

Two days later an anonymous tip led the superintendent of the Harvard University Police to follow a car with no license plate on West Roxbury Parkway. After a 20-minute slow-speed chase, the mysterious car pulled over, two men leapt out, handed over the Cod, and sped away.

Once returned to the State House, the "Sacred" Cod has remained in the House chambers to the present day. Not to be outdone, the Senate had a brass fish incorporated into the chandelier hanging in its chambers. Known affectionately as the "Holy Mackerel," this little fish lacks the historical importance of the "Sacred" Cod, but it is yet another sign of the critical role the fishing industry has played in the life of the Commonwealth.

Free tours of the State House are available to the public.

On this day in 1865, Governor John Andrew officially received the battered regimental colors of Massachusetts units of the Union Army in a solemn State House ceremony called "The Return of the Flags." It had...