This triumph of marine architecture was launched from Mr. M'Kay's ship yard in East Boston at precisely 12 o'clock on Tuesday. . . . We have never known so much enthusiasm attending the launch of a ship. Visitors were in town from the back country and from along the coast to witness the launch, particularly from Cape Cod, delegations from which arrived by the morning train. The wharves on both sides of the stream where a view was obtainable, were thronged with people; men, women and children vied in interest to get a look, and boys and men clung like spiders to the rigging of the ship, and the sides and roofs of the stores and houses, to get a glance at the sublime spectacle. . . . The river was full of vessels of various kinds and all kinds — from the Mayflower to the Steam Tug, and from the beautiful yacht to the little boat whose tiny sail seemed, in the distance, not bigger than a lady's hand, — and all were crowded with eager lookers.

. . . It is estimated that fifty thousand people witnessed the launch, and not an accident occurred, that we have heard of, to mar the scene. The little steamer Argo, however, came as near an accident, and missed it as was possible. She was directly in the way of the ship when she ran from the stocks, and notwithstanding all the efforts to get out of the way, the ponderous vessel passed her as she was paddling for dear life and carried away her flag staff. It was a truly narrow escape and the steamer's chance for a brief interval, was considered by spectators as a hopeless one.

. . . It was more than 200 feet from deck to main truck, with yards in proportion. The spanker mast was 110 feet long and fore and aft rigged. The hull was constructed of oak and pine and when seen from the shore was not particularly different from ordinary clipper ships, except in length and the great shear forward from the fore chains to the figure head. But once on board the visitor was truck with her enormous breadth of beam.

When rebuilt, the Great Republic also had a smaller hull, so the Wyoming, built in Bath, ME and a focus of the Maine Maritime Museum in Bath, was actually the largest wooden sailing vessel ever to carry cargo in the world.
Login

On this day in 1853, the Great Republic burned to the waterline in New York harbor the day before she was to set sail on her maiden voyage. Built by Donald McKay, the man most closely identified with the famous clipper ships of the mid-nineteenth century, the Great Republic was the largest wooden merchant sailing vessel ever built in the U.S. Clipper ships are thought by many to be the most beautiful of all sailing vessels; they were also the fastest, able to reach speeds of 20 knots. The clipper ship era passed quickly, like the ships themselves, but not before the best of McKay's vessels, built at his shipyard in East Boston, had set speed records that have never been broken.

Even with a far smaller sail area, the Great Republic sped across the ocean, reaching Liverpool in just 13 days. 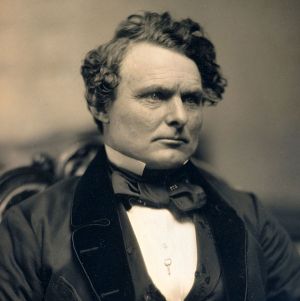 "She was a perfect beauty to every nautical man," one clipper ship captain said of his vessel. "She could do everything short of speaking." Long, lean, with knife-like bows, clipper ships boasted taller masts and more canvas than westerners had ever seen. Their builders gave them names like Flying Cloud, Chariot of Fame, Empress of the Sea, New World, and Lightning. They sped across the oceans and around Cape Horn, first to China, then to service the gold rushes in California and Australia. And it was Donald McKay, "more than any other builder, [who] brought the sharp-bowed, tall-masted sailing ships to perfection," wrote author A.B.C. Whipple.

Born in 1810 in Nova Scotia, the second of 16 children, McKay was 17 when he left home for New York City. He signed up for a four-and-a-half-year apprenticeship, committing himself "to learn the art, trade, and mystery of a ship-carpenter." In 1833 he married Albenia Boole, the eldest daughter in a family of shipbuilders. She taught McKay algebra, trigonometry, and drafting skills. He became good friends with John Griffiths, who worked in a nearby shipyard. Griffiths would be the first to propose the knife-like bow and other innovations that became the trademarks of clipper ships.

In 1840 McKay moved his family to Newburyport, a growing shipbuilding town in the northeastern corner of Massachusetts. He worked in partnership with two different men, building vessels for the thriving packet ship business. A Boston merchant who bought one was so impressed with McKay's skills that he persuaded him to leave Newburyport for Boston.

At the age of 34, the ambitious, energetic shipbuilder soon had his own shipyard on the East Boston waterfront. He introduced innovations developed by New York shipbuilders. His yard was the first in New England to use steam-powered derricks for lifting heavy lumber and steam saws for cutting. But he also insisted on retaining the best of traditional shipbuilding skills. His motto for everyone who worked in his yard was Excelsior (ever upward).

In 1850 he launched his first clipper, Stag Hound; over the next 19 years he would build 31 more. Among the most famous was Flying Cloud. At 1,783 tons and 229 feet long, she was the largest merchant vessel yet built. Poet Henry Wadsworth Longfellow was one of the hundreds of admirers who visited the shipyard time and again to watch the ship take shape. He captured her launching in a poem:

"She starts, — she moves, — she seems to feel/ The thrill of life along her keel,/ And, spurning with her foot the ground,/ With one exulting, joyous bound,/ She leaps into the ocean's arms!"

"And, spurning with her foot the ground,/ With one exulting, joyous bound,/ She leaps into the ocean's arms!"

On her maiden voyage in June 1851, the Flying Cloud set a record for the fastest voyage by a wooden sailing vessel between New York and San Francisco (via Cape Horn). She reached her destination in 89 days and 21 hours. Three years later, she broke her own record, reaching San Francisco in 89 days and eight hours. The record stands today.

In October 1853, McKay completed the Great Republic. The four-masted, four-deck ship was said to be "the darling of the builder's heart." She displaced 4,500 tons and stretched 325 feet bow to stern, nearly 30 percent longer than any ship then afloat. McKay hired 100 men and 30 boys to sail the luxuriously appointed vessel.

Such was the excitement over the Great Republic that Boston declared launch day a public holiday. Some 50,000 people attended. At exactly noon, "amid the roar of artillery, the music of bands, and the cheers of the multitude," an observer noted, the clipper ship slid smoothly into the water.

At exactly noon, "amid the roar of artillery, the music of bands, and the cheers of the multitude," an observer noted, the clipper ship slid smoothly into the water.

On December 26th, after taking on cargo in New York, the Great Republic was ready to sail. That night, a bakery near the wharf caught fire, and flying sparks ignited the ship's rigging. The majestic masts were too tall to be reached by the fire hoses. The burning rigging crashed and set the deck ablaze; fire destroyed everything above the waterline.

After settling insurance claims, McKay sold the vessel, and the new owner rebuilt her with shorter masts. A crew half the size of the original sailed her on her maiden voyage in February 1855. Even with a far smaller sail area, the Great Republic sped across the ocean, reaching Liverpool in just 13 days. She drew admiring crowds wherever she anchored and had an eventful career, which included transporting troops during the Civil War. The largest wooden merchantman ever built, the Great Republic went down off Bermuda in 1872.

By then, the clipper ship era was nearly over. The depression of 1857, the emergence of steamships, and the Civil War all contributed to its decline. McKay continued to build vessels, including several for the Union Navy. He sold his shipyard in 1869 and worked for other shipbuilders until he retired eight years later. When he died in 1880, he was buried in Newburyport.

The Hart Nautical Gallery is located on MIT's main campus.

On this day in 1888, one of the most ferocious storms of the nineteenth century battered the New England coast. In the seas off Hull, "Storm Warriors," as the men of the United States Life-Saving...