"In ye name of God, Amen. We whose names are underwritten, the loyall subjects of our dread soveraigne Lord, King James, by the grace of God, of Great Britaine, France, and Ireland king, defender of the faith, etc.

Haveing undertaken, for ye glorie of God, and advancemente of ye Christian faith, and honour of our king & countrie, a voyage to plant ye first colonie in ye Northerne parts of Virginia, doe by these presents solemnly & mutualy in ye presence of God, and one of another, covenant & combine our selves togeather into a civill body politick, for our better ordering & preservation & furtherance of ye ends aforesaid; and by vertue hearof to enacte lawes, ordinances, acts, constitutions, & offices, from time to time, as shall be thought most meet & convenient for ye generall good of ye Colonie, unto which we promise all due submission and obedience. In witnes wherof we have hereunder subscribed our names at Cap-Codd ye 11th. of November, in ye year of ye raigne of our soveraigne lord, King James, of England, France, & Ireland ye eighteenth, and of Scotland, ye fiftie fourth. Ano: Dom. 1620."

Tthe original document has not survived; the text is taken from Gov. William Bradford's Of Plimoth Plantation.

...part [of] what was then Virginia.
Login

On this day in 1621, the ship Fortune set sail from Plymouth Colony. The arrival of the vessel two weeks earlier — sent by the English investors who had funded the Mayflower colonists— should have been a cause for celebration. But for the Pilgrims, Fortune was poorly named. The ship brought 35 new settlers, but none of the expected supplies. With new mouths to feed, rations were reduced by half. Worse, the investors demanded that the ship return immediately to England, stocked with trade goods. The Pilgrims complied by loading Fortune with "good clapboard as full as she could stow" and two hogsheads of beaver and otter skins. The Plymouth settlers struggled under the demands of their English investors for seven years before buying out their shares and earning a measure of freedom.

The goods yielded far less profit than the Adventurers had anticipated, and as the seven-year mark approached, the colonists were still in debt. Finally, 27 of them pooled their personal resources and paid off the debt.

When a small group of religious dissidents first gathered in the town of Scrooby, England, in 1606, they had no intention of becoming pilgrims to North America. They simply wanted to establish their own church, where they could practice their Christian faith in what they held to be its true form, stripped of Anglican ritual and hierarchy. But in England at that time, the Anglican Church was the state church; to separate from it was against the law. When the Separatists persisted, bishops and sheriffs pursued and hounded them until, in 1608, they sailed for the Netherlands, hoping to find refuge under the more tolerant Dutch government.

Holland proved to be a safe place but not a happy one. Because they were not Dutch citizens, the English Separatists had limited employment opportunities. Over the years their standard of living declined dramatically. Fearing poverty — and worse, that their children were becoming Dutch — the Separatists made the decision to establish a colony in America.

But funding an overseas voyage and establishing a colony would be expensive. There were, however, a number of wealthy gentlemen, merchants, and craftsmen in London who believed that there was money to be made from exploiting America's natural resources. What they needed was a base for gathering and shipping furs, timber, fish, and other trade goods.

Fearing poverty — and worse, that their children were becoming Dutch — the Separatists made the decision to establish a colony in America. 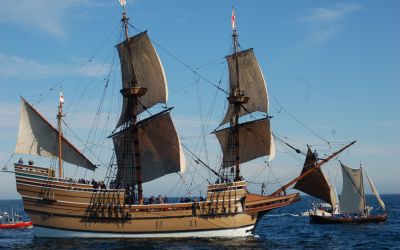 A group of about 70 of these speculators, whom the Separatists called Adventurers, put up the money to transport and provision the colonists; in return, the colonists, or Planters, agreed to live communally, to work for the company, and to ship goods back to England for a period of seven years to repay their debt.

After several aborted attempts, the Mayflower sailed from Plymouth, England, on September 6, 1620. It was bound for the area around Manhattan in the northernmost part what was then Virginia. No one knows whether the ship was blown off course or purposely headed to a location out of the jurisdiction of the Anglican Church, which was established in Virginia. In any case, the Mayflower anchored in Provincetown harbor on November11th. Some of the non-Separatists on board objected that since they had not gone to Virginia, as planned, they were not bound by their work contracts and needed to take orders from no one. After debating the issue, the group agreed "that we should combine together in one body, and to submit to such government and governours, as we should by common consent make and choose." All free adult male passengers signed the historic Mayflower Compact, the first document in the Americas to embrace the democratic principle of majority rule.

No one knows whether the ship was blown off course or purposely headed to a location out of the jurisdiction of the Anglican Church, which was established in Virginia.

After exploring the area north and south of Cape Cod, the colonists settled in Plymouth. Due to the lateness of the season, they set to work immediately building shelter. It was a severe winter; during the first few months, nearly half the 102 Mayflower passengers died. There was no doubt great ambivalence among the survivors as they watched the Mayflower depart for England in early April of 1621.

The key to their survival was the good will of the local Indians, who helped them plant corn and other crops that would thrive in Massachusetts. In the autumn, the Native people and the English gathered together for a festival; an abundant harvest promised to sustain them for the coming winter. The Pilgrims looked forward to the arrival of the next ship from England, which they expected would be laden with much-needed provisions, clothing, and other essentials.

But when Fortune sailed into Plymouth harbor on November 10th, it brought only more mouths to feed. While the Planters were grateful for the additional workers, they were dismayed to discover that the men had been sent without provisions. The ship did not even carry food to sustain the crew on the return trip. The Adventurers also sent a letter castigating the Planters for the fact that the Mayflower had arrived in England with an empty hold and demanding that the Fortune return immediately filled with valuable goods.

The Adventurers also sent a letter castigating the Planters for the fact that the Mayflower had arrived in England with an empty hold and demanding that the Fortune return immediately filled with valuable goods. 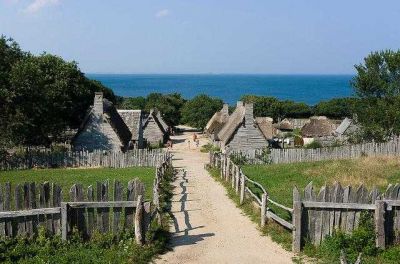 The colonists complied. For the next six years, they sent sizable shipments, especially of furs, back to England. But the goods yielded far less profit than the Adventurers had anticipated, and as the seven-year mark approached, the colonists were still in debt. Finally, 27 of them pooled their personal resources and paid off the debt. Once free of the requirement to live communally and hold all property in common, the original settlers divided the land into private grants. The era of the "Old Comers" was over.

In 1945 Plymouth resident Henry Hornblower conceived the idea of re-creating the "Old Comers'" village. Doing so would be a challenge: no image or record of the first buildings survived. The original site was buried under the center of modern Plymouth and inaccessible to archeologists. But Hornblower, who had been fascinated with the history of Plymouth since his youth, persisted. In December of 1945, he persuaded his father, a Boston investment banker, to donate $20,000 to the Pilgrim Society for the purpose of reconstructing an authentic Pilgrim village and Native American settlement. In 1947 the Pilgrim Society incorporated Plimoth Plantation, now one of the nation's leading outdoor history musems.

Plimoth Plantation: Who Were the Pilgrims?

On this day in 1909, two young girls, using ropes and a pulley, helped haul the last stone into place to complete the Pilgrim Monument in Provincetown. The town's Yankee residents had long been seeking...

On this day in 1658, Plymouth Court ordered that any boat carrying Quakers to Sandwich be seized to prevent the religious heretics from landing. A year earlier, Quakers in Sandwich had established the first Friends‘...