The Crucible Opens on Broadway

Although opinions vary about details of the workmanship, Arthur Miller's new play, "The Crucible," has made a deep impression on the town. Put it down as the most notable new play by an American so far this season, for Mr. Miller has an independent mind, professional skill and personal courage. "The Crucible" is the story of the hysterical persecution of people accused of witchcraft in Salem in 1692 when fear paralyzed the judicial faculties of men in authority. Probably Mr. Miller has had to alter some of the details of the record to make a tidy play out of a big historical subject; and he has also made a few remarks in passing that apply specifically to the public intolerance of today. But fundamentally, "The Crucible" is a portrait of the terror and ferocity with which a few Americans, mostly God-fearing men, once accused each other of allegiance to the devil….

Since "The Crucible" is a play about bigotry, it has certain current significance. "Is the accuser always holy now?" John Proctor ironically inquires when the court looks with suspicion on all the evidence that bears on Goodie Proctor's innocence. But Mr. Miller is not delivering a polemic or offering "The Crucible" as a deadly parallel. For the difference between the Salem trial and the current hysteria is a fundamental one. There never were any witches. But there have been spies and traitors in recent days. All the Salem witches were victims of public fear. Beginning with Hiss, some of the people accused of treason and disloyalty today have been guilty.

In "The Crucible" the parallels are minor to the central horror of the witch-hunt in Salem; and they involve the irresponsibility and maliciousness of the accusers, the avidity with which most people accept the accusations as proof of guilt and the bias against anyone who defends the accused people. Obviously, Mr. Miller has these things in mind, for no one can write about bigotry today in a historical vacuum. But they are incidental to the play as a whole, which dramatizes a unique episode in American history long before the time of representative government and the constitutional judicial system….

Out of a dark episode in American history Mr. Miller has written a fiery play.

On this day in 1953, Arthur Miller's play The Crucible opened on Broadway. Four years after winning the Pulitzer Prize for Death of a Salesman, Miller had written a far more controversial play. Set in Salem during the witchcraft trials of 1692, The Crucible is a masterful melding of fact and fiction. The play drew disturbing parallels between the events that ended with the hanging of 19 innocent men and women and the "witch hunt" being conducted by Senator Joseph McCarthy and the House Committee on Un-American Activities. While critics recognized Miller's courage in tackling such a provocative subject, they gave the play mixed reviews. Over time, it has become one of the classics of the American theatre.

The Crucible met with mixed reviews when it opened on Broadway. It was only in the 1960s that the play came to be considered a classic. 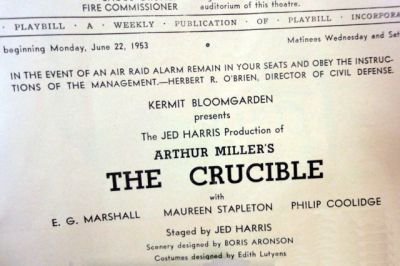 Arthur Miller was born in New York City, studied at the University of Michigan, and lived most of his adult life in New York. But the prize-winning playwright will forever be associated with Salem, Massachusetts, the setting of one of his most famous plays, The Crucible, which opened on Broadway in 1953.

The title of Miller's play refers to a vessel made to withstand severe heat, or metaphorically, a severe trial. He used the image to describe Salem in 1692. As accusations of witchcraft inflamed the community, many otherwise decent people lost their moral bearings. Neighbor denounced neighbor, family and friends betrayed each other, and men in positions of authority abused the public trust.

While a few of the participants in Salem acted maliciously, most of the town's residents were simply silent bystanders to the injustice being perpetrated. If they resisted the flood of false accusations, they risked becoming objects of suspicion themselves. The end result was the public condemnation of innocent people, leading to the conviction and hanging of 19 men and women.

Arthur Miller first encountered the Salem tragedy in an undergraduate course. It stayed in his mind as a compelling tale of human frailty. Ten years later, he read The Devil in Massachusetts, a new book that portrayed Salem as a classic tragedy of individuals making flawed moral decisions.

Miller recognized universal truths in the story. In his mind, the failure of the Salem community was the failure of many individuals. It was an example of how people will seek the safety of group membership — even if it means betraying friends or loved ones, lying, or simply remaining silent — rather than risk being associated with a persecuted or condemned minority.

Arthur Miller wanted his audience to see that the dilemma facing the characters in The Crucible was not unique to seventeenth-century Salem. 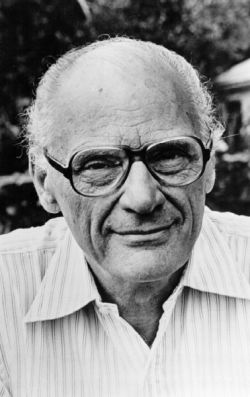 Arthur Miller wanted his audience to see that the dilemma facing the characters in The Crucible was not unique to seventeenth-century Salem. In his own time, the medieval idea of witchcraft had been replaced by pseudoscientific concepts that demonized people on the basis of race, nationality, religion, or political ideology.

In 1952, as Miller was writing The Crucible, a modern "witch hunt" was underway in the United States. Wisconsin Senator Joseph McCarthy's Permanent Subcommittee on Investigations and the House Committee on Un-American Activities (HUAC) were destroying the reputation of anyone suspected of communist sympathies.

The committees asserted, without proof, that many artists, writers, directors, and actors were members of the Communist Party. If they admitted even to sympathizing with the aims of socialism, McCarthy demanded that they give him the names of anyone they knew who was involved in "un-American" activities. Congress issued contempt citations to those who refused to comply. Miller found in these hearings obvious parallels to Salem in 1692.

The playwright saw cowardice up close. Several of his friends and colleagues admitted to having socialist sympathies and, in a public act of contrition, named others who shared their politics. They had reason to fear for their careers; witnesses who did not cooperate with the committee could expect to lose their jobs.

When Miller himself was eventually called to face HUAC, he gave the committee only names it already had. He was found guilty of contempt — a conviction later overturned by a federal court — but not jailed; nevertheless, his career was affected. He lost potential screenwriting jobs, and groups such as the American Legion protested when his plays were produced.

"The play is not reportage of any kind," he said, "nobody can start to write a tragedy and hope to make it reportage. . . . What I was doing was writing a fictional story about an important theme."

As he began work on The Crucible, Miller knew that comparisons would inevitably be drawn to the McCarthy hearings. He based as much of the play as possible upon the facts of the Salem case. Miller spent a year in Salem, reading the surviving documents related to the trial. When the play was published, Miller included not only the script but detailed historical information about Salem in the 1690s and about the real lives of the main characters.

But his goal was not to write history. "The play is not reportage of any kind," he said, "nobody can start to write a tragedy and hope to make it reportage. . . . What I was doing was writing a fictional story about an important theme." Indeed he did fictionalize certain important aspects of the story, chiefly the relationship between the characters John Proctor, who was 60 at the time of the trials, and his accuser Abigail Williams, who was only 11.

Several of his friends and colleagues admitted to having socialist sympathies and, in a public act of contrition, named others who shared their politics.

The Crucible met with mixed reviews when it opened on Broadway. It was only in the 1960s that the play came to be considered a classic. It has been produced countless times by high school drama clubs, college theatres, and professional companies, revived on Broadway, and filmed for television and the big screen. Towards the end of his life, Miller looked back and observed, "It seemed to me that the hysteria in Salem had a certain inner procedure. . . . which we were duplicating once again, and that perhaps by revealing the nature of that procedure some light could be thrown on what we were doing to ourselves."

Two memorials have been created in memory of those put to death during the Salem Witch Trials. Information about Salem's site may be found at: www.salemweb.com/memorial/memorial.php. The town of Danvers, originally called Salem Village and where the events related to the witch trials occurred, also has a memorial located at 176 Hobart St. in Danvers.

For information on other sites with a connection to the Salem Witch Trials, visit historyofmassachusetts.org/where-did-salem-witch-trials-take-place/