Mayor Curley and the photo-play "Birth of a Nation" shared unequally in condemnation and denunciation at a mass meeting of Negroes at the Twelfth Baptist Church, Shawmut Avenue, Roxbury, yesterday afternoon, called to express indignation against the continued exhibition of the play. The mayor received by far the larger share of the censure.

The mayor was stigmatized as "the most hypocritical mayor that the city of Boston has ever had;" … his name was hissed, and last but not least, the name of John F. Fitzgerald was cheered … when his action in forbidding the continued production of "The Clansman" was contrasted with Mayor Curley's failure to order "The Birth of a Nation" to quit business in Boston.

The meeting was called by Mrs. Olivia Ward Bush Banks and its announced purpose was to form a "protecting league of all colored women of Greater Boston for the maintenance and protection of their civil rights. Such an organization was formed, with Mrs. Banks as its president and Mrs. Minnie Wright as chairman of the "vigilance committee of 100."

…Mrs. Wright made an impassioned address. "What pride is it for me to say that I was born in Boston if I am put in bondage in my home?" she inquired. "Let me take back that I was born in this city until Boston clears her name. We are here to stay in the fight until God tells us to go home or until we lose our last drop of blood. The police are nothing more than brutes. They are low-down men wearing the uniform."

"We want 'The Birth of a Nation' removed from the city of Boston and we women of Boston propose to see that it goes. If we can't get rid of it by fair means it will be by foul means," said Dr. Alice W. McKane. "If there are men here who are afraid to die there are women who are not afraid. This play would not be tolerated if it affected any other race or people. If discrimination is made because we are black, soon there will be religious and racial discrimination and that would be very dangerous…They think us a poor helpless set of black people, but if this thing is humiliating to us it should be doubly humiliating to the white people…"

Dear eMoment subscribers, A picture of famed Hollywood director C.C. DeMille was being used as a "placeholder" for today's eMoment while we looked for a more appropriate image. Unfortunately, before the image was changed to one of William Monroe Trotter, DeMille - who was in no way involved in the creation or scandal surrounding "Birth of a Nation" - was broadcast to all of our subscribers, as well as anyone who signed on to the site prior to 10am this morning. We at Mass Moments regret the error and any confusion it may have caused.
Login

On this day in 1915 Boston's African American community protested the showing of the racist film The Birth of a Nation. When 800 black women gathered at a Baptist church, one speaker suggested that "if there are men here who are afraid to die there are women who are not afraid. This [movie] would not be tolerated if it affected any other race or people." In spite of rallies and demonstrations, the film opened on April 17, 1915, at the Tremont Theater. While African Americans protested, thousands of white Bostonians flocked to the film. Quite possibly the most controversial movie ever produced, The Birth of a Nation also has the distinction of being the first film shown in the White House.

In spite — or perhaps because — of the film's popularity with white audiences, the protests it generated proved to be a watershed in black activism. 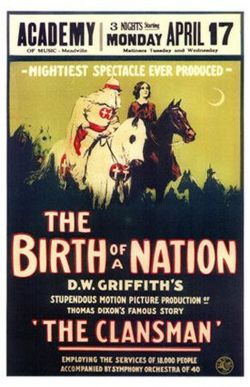 When The Birth of a Nation was released in the winter of 1915, it fascinated and repelled audiences. A silent movie that used innovative techniques, such as close-ups, flashbacks, and fades, it appealed to popular myths about the supposed injustice inflicted on the South during Reconstruction. And it portrayed African Americans as either childlike individuals with limited mental abilities or depraved creatures who lusted after young white women.

African Americans and sympathetic white people found the film deeply offensive. All across the country, African Americans filed petitions, appealed to legislatures, met with mayors and governors, picketed theaters, and organized protest marches in an effort to ban the film.

The Birth of a Nation was based on the Reverend Thomas Dixon's 1905 book, The Clansmen, which pays tribute to the Ku Klux Klan. D.W. Griffith, director of the film, was also an admirer of the Klan. The members of the Klan "ran to the rescue of the downtrodden South after the Civil War," he wrote in his autobiography. It was a view his film championed. The idea, explained leading actress Lillian Gish, was to "tell the truth about the War between the States. It hasn't been told accurately in history books."

All across the country, African Americans filed petitions, appealed to legislatures, met with mayors and governors, picketed theaters, and organized protest marches in an effort to ban the film. 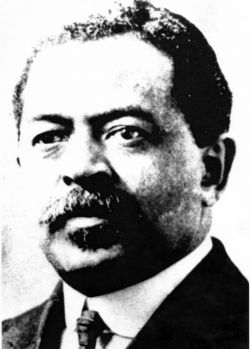 The film premiered in Los Angeles on February 8, 1915. In early April, Boston newspapers announced that it would soon be shown in the city, also home to the first local NAACP chapter in the nation. Together with William Monroe Trotter, the organization spearheaded a vigorous campaign to ban the film.

William Monroe Trotter (1872–1934) was an uncompromising advocate of equal rights for black Americans. An 1895 graduate of Harvard, he was the first African American elected a member of Phi Beta Kappa. In 1901, he founded The Guardian, a weekly newspaper devoted to race relations, and used it as a forum to attack the growing number of lynchings, the Jim Crow laws that enforced segregation on both sides of the Mason Dixon Line, and all forms of racial discrimination.

In 1905, Trotter and Massachusetts native W.E.B. Du Bois co-founded the Niagara Movement, but when that became the NAACP, Trotter withdrew. He objected to the presence of whites in the NAACP leadership and its dependence on white financing. He created an alternative organization — the National Equal Rights League.

. . . the leaders of Boston's NAACP and Trotter argued that the film was a threat to public safety, that it heightened racial tensions, and could incite violence.

To ban The Birth of a Nation, African Americans had to go beyond showing that the film slandered them and utterly distorted history. Like their counterparts in other northern cities, the leaders of Boston's NAACP and Trotter argued that the film was a threat to public safety, that it heightened racial tensions, and could incite violence.

Boston Mayor James Michael Curley responded by holding a public hearing. D.W. Griffith as well as Trotter and NAACP leaders testified. Curley claimed he could only censor the film if it were "indecent and immoral." After the filmmaker agreed to cut certain sexually suggestive scenes, the film opened.

Trotter and a number of other African Americans attempted to purchase tickets and were refused. When they protested, police appeared and arrested Trotter and ten others. The following day historic Faneuil Hall was the site of a huge demonstration.

"We want 'The Birth of a Nation' removed from the city of Boston," they declared, "and we women of Boston propose to see that it goes."

The protests intensified. On the 19th, some 2,000 African Americans assembled at the State House to protest the film. A group of black leaders met with Governor David Walsh, who shortly thereafter introduced the Sullivan Bill to tighten censorship. A group of black women held a meeting at a church in Roxbury on the 25th. "We want 'The Birth of a Nation' removed from the city of Boston," they declared, "and we women of Boston propose to see that it goes."

Two days later, 500 African Americans appeared when the Judiciary Committee held hearings on the Sullivan Bill. On May 2nd, there was an NAACP meeting at the Tremont Temple and then a rally, organized by Trotter, on Boston Common. The Sullivan Bill passed three weeks later, but when the censorship board met, it ruled that The Birth of a Nation was "not at all objectionable."

The film was shown in Boston 360 times over a period of six-and-a-half months. It enjoyed similar success in other cities and was hugely profitable. By the end of 1915, in New York City alone, gross receipts were $3,750,000. In spite — or perhaps because — of the film's popularity with white audiences, the protests it generated proved to be a watershed in black activism. The film brought national attention to the five-year-old NAACP; when white newspapers covered the protests, which they did, black Americans had a rare opportunity to be heard.

William Monroe Trotter's home in Dorchester is a National Historic Landmark (although it remains a private home).

"D.W. Griffith and the Birth of a Monster: How the Confederacy Revived the KKK and Created Hollywood," by Mark Calney.

On this day in 1924, the largest gathering of the Ku Klux Klan ever held in New England took place at the Agricultural Fairgrounds in Worcester. Klansmen in sheets and hoods, new Knights awaiting a...

"Codnapping" at House of Representatives