The Dairy show is on. Over 45,000 people yesterday poured through the brand new white gates of Springfield's Eastern States exposition grounds to pay their homage to man's "foster mother," the cow. With perfect New England autumn weather, with flags on every building, with cows, plaster paris cows, cow dolls, crockery cows, cows in scores of show windows, with the outpouring of her whole holiday population, Springfield greeted the greatest gathering of livestock interests ever held in New England.

A million dollars worth of the finest dairy cattle on the American continent stood on dress parade in the thousand stalls of the two great stables of Springfield's new Eastern States exposition. A million dollars worth of dairy machinery hummed and roared in Machinery Hall. Thousands of prize corn ears, enormous pumpkins, squashes, cabbages, potatoes washed to positive sleekness, garden vegetables by the cartload, shelf after shelf of glowing preserves, garments numerous enough and fine enough to stock a department store, all in the Women's building…and a tent just outside, displayed the finest work of boys and girls of the ten states touching the Atlantic Ocean north of the Mason and Dixon line.

On this day in 1914, a group of western Massachusetts businessmen created a new organization, the Eastern States Agricultural and Industrial Exposition. Its purpose was to promote New England agriculture, which was in serious decline, by linking it to New England industry, which was thriving. In less than ten months, the men leading the Eastern States movement turned 175 acres of swampy land along the Westfield River into a showcase for agricultural and industrial exhibits and a place for wholesome entertainment. In the fall of 1916, 45,000 people attended the first event held on the grounds. Nearly 90 years later, the Big E, as the fair has long been called, draws 1,000,000 visitors a year to that same site in West Springfield.

The Avenue of States now includes a replica of the Massachusetts State House along with structures built by each of the other states in the region. 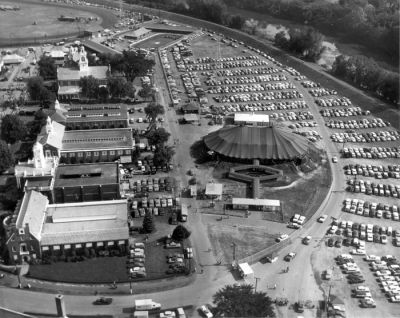 Cattle shows and agricultural fairs have a long history in New England, beginning with Elkanah Watson's exhibition of two imported Merino sheep in Pittsfield in 1807. People flocked to see this new breed of sheep with superfine wool. Three years later, Watson organized a cattle show to exhibit the latest in animal husbandry. Early nineteenth century farmers were eager to learn about new breeds of livestock, scientific improvements in soil cultivation, and the latest farm machinery.

The success of Elkanah Watson's fair led to the establishment of the Berkshire Agricultural Society — the first permanent agricultural association in the United States and the model for similar societies in other Massachusetts counties. The societies' annual fairs were high points of social life for people in rural communities across the state and, later, across the nation.

By 1900 farming was becoming a marginal enterprise in Massachusetts. The state's small, hilly farms could not compete with the large farms that had been carved out of more fertile land further west. As New England's economy turned to industry, commerce, and manufacturing, it appeared that farming in the region would soon be an activity only gentlemen could afford to pursue.

Representatives from industry, farming, commerce, and banking were enlisted to create "improvement leagues" and farm bureaus throughout the region. 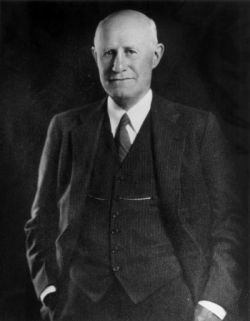 When a New Englander suggested in 1916 that the nation's largest cattle show, the National Dairy Show, be held in Massachusetts, the Chicago-based directors of the show considered the idea "preposterous." But they did not know Joshua L. Brooks, a printer and entrepreneur from Springfield who also owned and operated a 300-acre farm in Wilbraham. He believed that cooperation and the adoption of innovative techniques for financing and marketing would lead to an agricultural revival in New England. The key, he insisted, was to link the region's agriculture to its industry and commerce.

Brooks was a respected and successful businessman; he soon had the support of other prominent men such as Horace A. Moses, owner of the Strathmore Paper Company. Moses shared Brooks's faith in "the possibilities if modern methods and sound business principles were applied" to northeastern agriculture. Representatives from industry, farming, commerce, and banking were enlisted to create "improvement leagues" and farm bureaus throughout the region. Spearheading what they called the "Eastern States Movement," they sought to restore New England farming to "a good paying basis."

In April of 1914, the men involved in the movement formed the Eastern States Agricultural and Industrial Exposition and began to plan an exposition that would showcase the latest innovations in agriculture and industry. A man with "unquenchable determination," Joshua Brooks made a bold move. In 1915 he persuaded the National Dairy Show to hold its annual event in West Springfield the following fall, at a huge exposition complex and fairground that did not yet exist.

. . . the Eastern States Agricultural and Industrial Exposition secured $750,000 in financing, built two barns with room for over 2,000 head of cattle plus sheep, swine, and other animals, and a model of the Roman Coliseum. 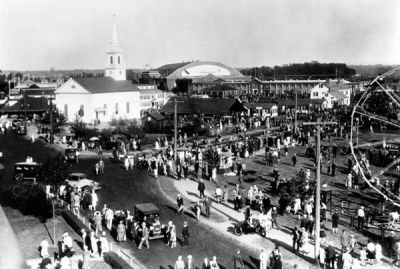 The Exposition's official history describes Brooks's amazing success. Under his leadership, the Eastern States Agricultural and Industrial Exposition secured $750,000 in financing, built two barns with room for over 2,000 head of cattle plus sheep, swine, and other animals, and a model of the Roman Coliseum. Other amenities included a half-mile racetrack, racing stables, a Horse Show building, a "women's building" for domestic exhibitions, and a huge Machinery Hall to house the latest in farm equipment. With a beautifully landscaped grand entry and parade grounds, the site was completed in time for the National Dairy Show.

The 1916 Dairy Show was just the beginning for the Eastern States Exposition. The following year a nine-day "Exposition and Dairy Show" featured livestock competitions in the Coliseum, a horse show, and a variety of entertainment, including horse and auto races, circus acts, rides, and the only completely equipped cafeteria on any exposition grounds in America.

Except during wartime, the Eastern States Exposition, long known simply as the "Big E," has been held annually ever since. It has continued to grow. Each New England state constructed its own building. The Avenue of States now includes a replica of the Massachusetts State House along with structures built by each of the other states in the region.

". . . teach the growing generations to realize that thrift and economy, coupled with industry, are as necessary now as they were in past generations."

Another notable feature of the Exposition is the Storrowton Village Museum, a collection of nine New England buildings dating from 1767 to 1839 that were moved to a corner of the fairgrounds in the late 1920s to re-create a New England village. Helen Osborne Storrow, one of the early visionaries of the living history movement, was the determined woman who masterminded this project. (Boston's Storrow Drive is named for her husband.)

Horace Moses, one of the Exposition's founders, was eager to include youth in the fair. Through his efforts, in 1919 the Exposition became the birthplace of the Junior Achievement program, which was designed to "teach the growing generations to realize that thrift and economy, coupled with industry, are as necessary now as they were in past generations."

The Big E's roots in New England agriculture are evident in the display of over 25 breeds of cattle, sheep, goats, and hogs. Even today, more than a century after the first fair, Eastern States Exposition Champion remains a coveted title.

Storrowtown Village Museum is open throughout the summer.

History of Junior Achievement The Big E website includes a history of the Eastern States Exposition. Historic Buildings of Massachusetts