When you were competing internationally, how far into the future did you look?

It scares me when I hear people say, "My daughter is going to be an Olympic swimming champion some day," or when a young skater says to me, "Some day I want to win the world championships." It's nice to have motivation. It's important that it be motivation from within, and not from a coach or friend or family. But I would bet you that most people who have succeeded, even though they had an idea of what they wanted to do, didn't just say, "I want to be... " and then name a title, or say "happy" or something like that. I bet it's because they loved what they were doing. It certainly was for me.

….You do it because you love what you are doing. And you don't say I want to be a certain way or a certain type. It's more a feeling from within, seeing what you can do.

Once my English professor in high school had said, "Why are you doing something as frivolous as a sport like skating? If you are interested in medicine, why don't you just stop doing something so silly?" And I thought, he had a point, but at the same time, I wouldn't be any use to anybody at the age of fifteen as a physician, and I mentioned it to my grandmother afterwards. And I said, "You know, it does sound silly, and it does sound as if I'm doing it just for my own fun." And she said:

"You have an obligation to do the best you can with whatever you've got.

And if you like to do a sport, and you can do part of it well, that's a way of expressing what God gave you…."

On this day in 1944, Harvard's governing board approved the admisison of women to its medical school. The first co-educational class at Harvard Medical School matriculated in September 1945, nearly 100 years after the first recorded request for admission by a woman. Olympic gold medalist and Radcliffe graduate Tenley Albright entered Harvard Medical School in the fall of 1957. She went on to become a successful surgeon and blood plasma researcher. 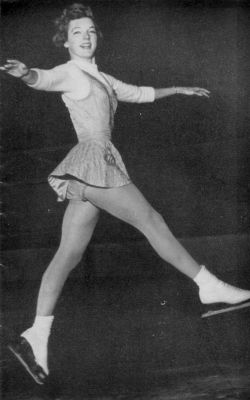 In 1956, 20 year-old Tenley Albright of Newton became the first American figure skater to win an Olympic Gold Medal. Albright retired from skating almost immediately and turned her attention to her other life goal: becoming a surgeon and medical researcher.

Only six of the 130 students in her Harvard Medical School Class were women, but Albright was undaunted. She had spent much of her young life fighting long odds.

Tenley Albright was born in Newton in July 1935, the daughter of a prominent Boston surgeon. When she was eight, she received her first pair of skates, and her parents flooded a portion of their backyard so that Tenley and her brother could skate. As her love and talent for the sport grew, Tenley began taking lessons at the Skating Club of Boston. Her instructors recognized her gift but were frustrated that academics were a higher priority for her than skating. In the beginning, she skated simply for the joy of it.

In 1946, when she was 11 years old, Tenley Albright contracted polio. The dreaded disease kept many children confined to hospitals and iron lungs for months at a time; many of its young victims were left partially paralyzed. After being hospitalized for several weeks, Tenley was well enough to go home. She was among those fortunate enough to escape paralysis, but the polio left her very weak.

Doctors suggested that skating might help her to regain her strength. A determined and focused Tenley concentrated on rebuilding her muscles through skating. Years later she remember her return to the rink. "It seemed so huge after being in the hospital so long . . . hanging on to the barrier, sort of creeping along it, and staying down at one end. But when I found that my muscles could do some things, it made me appreciate them more. I've often wondered if maybe the reason it appealed to me so much was that I had a chance to appreciate my muscles, knowing what it was like when I couldn't use them."

A determined and focused Tenley concentrated on rebuilding her muscles through skating. 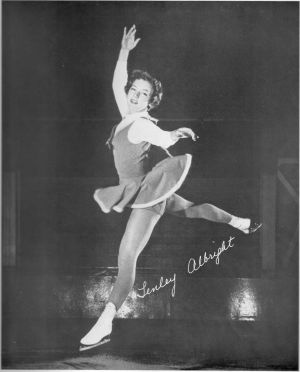 As Tenley Albright concentrated on skating her way back to health, she began to treat the sport with the same concentration and seriousness that she brought to her studies. She began to take risks on the ice and overcame her fear of falling. "If you don't fall down, you aren't trying hard enough, you aren't trying to do things that are hard enough for you," she has said. "I can remember taking several pairs of skating tights to the rink because I would get so soaked, falling down again and again and again while I tried the sit-spin. . . . [But] the feeling when you finally do manage not to fall down, when you are trying something new, is such a wonderful feeling that you want that feeling again. . . . And that applies to whatever you do."

Amazingly, only four months after she had returned to the ice, Tenley Albright won the Eastern Juvenile Skating Competition. The next year she won the U.S. Ladies Novice championship, and at age 14, the U.S. Ladies Junior title. She qualified for the U.S. Olympic team in 1952 and brought home a Silver Medal.

Skating did not distract Albright from her studies. She rose each morning at 4:00 am to skate before breakfast, attended a full day of school, then returned to the ice in the afternoon. This grueling routine allowed her not only to get in seven hours of skating each day, but to qualify for admission to Radcliffe College as a pre-med student.

Even after she entered Radcliffe, she continued to balance skating and studying. She won five consecutive national championships and in 1953 became the first woman skater to win the sport's "triple crown," capturing the World, North American, and United States figure skating titles.

In 1956 the 20-year-old Albright took a leave of absence from college to prepare for the Olympics. Competition was expected to be fierce, particularly from her talented teammate Carol Heiss. This would be the first internationally-televised winter Olympics, and millions of people were expected to tune in to see the popular figure skating event.

Two weeks before the games opened, catastrophe struck. Albright hit a rut in the ice and fell; the blade of her left skate cut her right ankle, slashing a vein and scraping straight to the bone. Her surgeon father flew to Italy to repair the injury. He found her in bed and hardly able to walk. Few people believed she would be able to compete.

Showing her characteristic grit, she refused to give up and decided to stay in the competition. She later told an interviewer, "The one thing I want to be able to do after it's over is say that was my best." Her best turned out to be very good indeed. Skating before 10,000 spectators, she won the Gold Medal. She was welcomed back to Boston with a parade.

Albright hit a rut in the ice and fell; the blade of her left skate cut her right ankle, slashing a vein and scraping straight to the bone.

Within a year of winning her Olympic Gold Medal, she retired from competitive skating. She turned down many lucrative professional skating contracts to focus on her other life ambition — becoming a surgeon. She took summer classes to catch up with her classmates and graduated from Radcliffe in three years. In the fall of 1957 she entered Harvard Medical School.

She approached medical school the same way she had approached skating — taking one step at a time. The discipline and dedication she had developed as an athlete proved enormously helpful. She found that the intense concentration and focus required for competition were also essential when performing surgery.

Tenley Albright had a successful career as a surgeon and blood plasma researcher. She and her husband raised three daughters. They lived in Brookline close enough to the Country Club for her to put on her skates and take a spin around the pond.

In 2000, Sports Illustrated named Tenley Albright one of the "100 Greatest Female Athletes."

On this day in 1994, Nancy Kerrigan of Stoneham was practicing for the U.S Figure Skating championships. As she left the ice and stopped to speak to a reporter, a man assaulted her with a...