PHONE STRIKE WILL START TUESDAY AM

More than 1000 members of the Boston Operator's Union voted unanimously to take this action at a meeting in Faneuil Hall last night. Orders were immediately issued by Miss Julia S. O'Conner, president of the operator's department of the International Brotherhood of Electrical Workers, for all other locals in New England to walk out at the same time.

Attempts to block this action of the operators by representatives of the International Union were unsuccessful. It is expected that all members of the men's locals will also vote to strike when the New England Joint Council of Telephone Workers meets in this city today.

…If the strike is endorsed by the council today, enough men will walk out to bring the total number on strike close to 20,000.

The meeting was one of the most demonstrative that has been held by the Operator's Union. When it was declared that the vote to strike was unanimous, the cheers of the girls could be heard in Adams Square.

This remark roused the operators beyond all restraint and from that moment it was only a question of putting the strike question to them, to have it unanimously approved.

On this day in 1919, striking telephone operators in Massachusetts won the right to negotiate with the New England Telephone Company. The young, single women who had flooded into the industry in the early 1900s wanted higher wages and better working conditions. When they took off their headsets and walked off the job, they brought business in New England to a standstill. Government officials and industry executives were surprised by the women's organization and determination. In less than a week, the phone company agreed to the strikers' demands. The victorious operators returned to work, but within a few years, they would face a greater threat: the self-dial telephone. Manually-operated switchboards would soon be more common in museums than city telephone offices.

Merely to get the job, a woman had to pass height, weight, and arm length tests to ensure that she could work in the tight quarters afforded switchboard operators.

For the first few decades after telephones became common in American households, people rang an operator to place their calls. A voice responded, "Number please?" and the caller's line was manually plugged into the appropriate connection on a switchboard.

It may have been a desirable job but it was not an easy one. Telephone companies had strict rules for all aspects of operators' behavior on the job. Merely to get the job, a woman had to pass height, weight, and arm length tests to ensure that she could work in the tight quarters afforded switchboard operators. Operators had to sit with perfect posture for long hours in straight-backed chairs. They were not permitted to communicate with each other. They were to respond quickly, efficiently, and patiently — even when dealing with the most irascible customers.

All this took place under the watchful eye of supervisors. Minor mistakes were punished with detention, as if the women were school children. The New England Telephone Company magazine reminded its operators, "Telephone calls are not telephone calls at all, they are acts of service. . ." 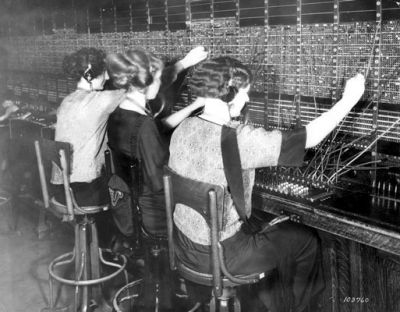 As the telephone industry grew dramatically in the early 1900s, so too did the pressure on the operators. Under a strict regimen that they likened to military discipline, the operators were expected to work at what one called an "intensely nervous pace." Telephone companies extended the workday by introducing the "split trick" schedule: operators worked two separate shifts in one day with a three-hour unpaid break in-between. Despite the demands of the work, telephone operators were poorly paid.

In 1912 operators began to organize for greater control over their work environment and better pay. The campaign was led by Julia O'Connor — like many of the operators, a young, single, Irish-American woman — who had worked briefly on a switchboard before becoming so dissatisfied with the conditions that she quit and dedicated herself to organizing a union for operators.

O'Connor had allies in Boston where many middle- and upper-class women were involved in progressive causes, such as suffrage, settlement houses, women's education, and trade unionism. With their support, the Boston operators staged a brief and successful strike in 1913. Soon union membership was growing in other Massachusetts cities, including Lynn, Springfield, Worcester, New Bedford, Framingham, Fitchburg, Salem, Lowell, Lawrence, and Haverhill.

. . . at a union meeting in Boston, one woman called out, "It took the Yankee Division to lick the Kaiser. Now let the Yankee operators lick Burleson."

Workers in all industries took advantage of the labor shortage during World War I to seek higher wages and better working conditions. Faced with an economic slump after the war, business leaders tried to reverse those gains; workers struggled to hold on to them. In 1919 one-fifth of the nation's industrial workers went on strike, a greater proportion than at any other time in the nation's history. In Massachusetts, a hotbed of labor militancy, textile factories, the transit system, even the Boston Police Department were hit by strikes. In April, the switchboard operators walked out.

During the war, federal authorities had given Postmaster General Albert Burleson control over telephone communications. After the war, operators sought a new contract, but Burleson refused to discuss the issue himself or allow the phone companies to negotiate. After six months of frustration, on April 15, 1919, the members of the Boston local voted to strike.

That same day telephone operators throughout New England took off their headsets, left their switchboards, and began picketing outside regional exchanges. Organized labor had not historically welcomed women, and male labor leaders at first refused to support the striking operators. American Federation of Labor head Samuel Gompers urged Julia O'Connor, now president of the operators union, to "maintain self-control and give opportunity to those who are in a position to bring about [an] honorable adjustment." But at a union meeting in Boston, one woman called out, "It took the Yankee Division to lick the Kaiser. Now let the Yankee operators lick Burleson." According to a newspaper reporter, this "utterance . . . was like a flame to gunpowder."

In Boston, the police were so sympathetic that they refused to perform their traditional strikebreaking role.

The strikers stayed on the picket line. The telephone had been so widely adopted in New England that the region was paralyzed. Strikebreakers hired by the company were unable to keep the system functioning. The operators now had the backing of other unions. In Boston, the police were so sympathetic that they refused to perform their traditional strikebreaking role.

Under mounting pressure from the media and Massachusetts politicians, the Postmaster General finally allowed the New England Telephone Company to negotiate directly with the operators. It took only two days to reach an agreement. The operators won a wage increase, a change in the split shift policy, and a guarantee of their right to organize.

The telephone strike of 1919 had another, unanticipated outcome. When the strike shut down the system, the telephone company decided it had to reduce its dependence on operators. Within a few years, the "automatic" dial telephone was introduced and operator assistance was no longer needed for local calls.

The Boston Women’s Heritage Trail: Chinatown/South Cove Walk passes the an expansion of the telephone exchange where Julia O'Connor worked, as well as other sites associated with women's labor history.

WGBH News: The More Things Change: 97 Years Ago, The Phone Company was also Dealing with a Strike

"Women, Unions, and the Electrical Industries," Engineering and Technology Wiki.