“Williams in Character Even to Dramatic End”

Ted Williams was in character to the end. He hit a home run in his last time at bat. He took a dig at the sports writers. He did not tip his cap or otherwise acknowledge the applause of 10,454 nearly hysterical fans who had come to see and cheer his farewell at Fenway Park.

His farewell at Fenway or elsewhere, as it turned out. Unknown to the public, he had decided before yesterday’s game not to play the final three games at Yankee Stadium.

Thus, the Williams, who as a 20-year-old rookie had struck out against Red Ruffing his first time at bat, in Yankee Stadium, Apr. 20, 1939, close his career with his 521st home run.

When he batted in the eight, for his last time up in Boston—except for Old-Timers Games. A stand-up ovation delaying action two minutes.

And when he lined a 1-1 fast ball by Jack Fisher off the Red Sox bullpen roof. Pandemonium filled the park as he hastily rounded the bases.

After he had scurried down the steps and ducked into the Boston dugout in his self-conscious way, the applause continued. It swelled. The audience wanted a curtain call.

“We want Ted.” The chant grew.

“Go ahead out, Ted,” urged teammates. “Wave your cap at ‘em. Just step out for a second.”

Was he embarrassed? Was he untouched? Was he proud?

He wouldn’t move—at 42, after 22 years, playing his last game for the fans he said he loved. Unbroken the vow he made in 1940, when he was boohed and jeered for not hitting homers into the specially constructed “Williamsburg” bullpens:

“To hell with them. They can booh me or they can cheer me, but I’m not going to tip my cap.”

The game is played. They’ve taken in the foul lines.”

“Williams in Character Even to Dramatic End,” by Harold Kaese. Boston Globe, September 29, 1960.

This day is celebrated in literary lore by Massachusetts' own John Updike. His essay "Hub Fans Bid Kid Adieu" appeared in the Nov., 1960 issue of the New Yorker. It is considered by many sports writers to be one the best articles ever writen on baseball. The prose are pure Updike. The article may be found at: http://www.baseball-almanac.com/articles/hub_fans_bid_kid_adieu_article.shtml Also, read Bob Ryan's article on the Updike piece from the 9/28/08 edition of the Boston Globe at the following website: http://www.boston.com/sports/baseball/redsox/articles/2008/09/28/updike_hit_it_out_of_the_park_too/
Login

On this day in 1960, Ted Williams thrilled the fans at Fenway by hitting a dramatic homer at his last at-bat in his 21-year career with the Boston Red Sox. A complicated man and brilliant player, he was beloved by fans even though he often snubbed them. He made up for his lack of physical strength with mental toughness. He single-mindedly pursued his goal of being "The Best Hitter Ever." He won two Triple Crowns, two MVP Awards, six batting titles, and — in spite of spending nearly five full seasons in the military —amassed 521 home runs in his career. He retired with a lifetime batting average of .344 and "universal reverence" as perhaps the best hitter in the history of baseball.

Twice — in 1942 and 1946, both years he won the American League Triple Crown — Boston sportswriters kept Williams off the MVP ballot. 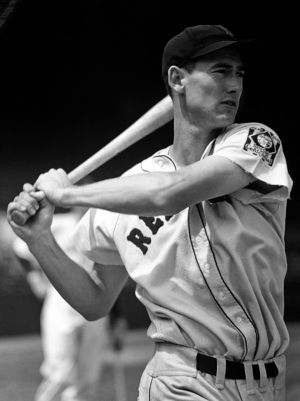 Theodore Samuel Williams was born in San Diego on August 30, 1918. His father, a photographer, was mostly absent, and his mother worked long hours as a Salvation Army worker. Williams spent much of his boyhood on playgrounds, developing the craft that would later make him a legend. "I used to hit tennis balls," Williams recalled. "Old baseballs, balls made of rags — anything."

A scout who saw him play in high school signed the tall, skinny, left-handed hitter to a contract with the hometown San Diego Padres. Two seasons later, the Boston Red Sox offered the Padres $25,000 and four players for Williams. After one season in the minor leagues, in 1939 the 20-year-old Williams started as the Red Sox right fielder.

His first season, he hit .327 with 31 homers to lead the American League with 145 RBIs. Williams tipped his hat for every home run he hit that season, and fans began to call the talented young player "The Kid." In 1940 he moved to left field to protect his batting eye from hours of staring into the sun. The next season, his batting average was still a respectable .344, but he was frustrated by the quality of his play. At 6-foot-3 and 205 pounds — he was later nicknamed "the Splendid Splinter"— Williams did not have the traditional slugger's build, and his long legs made it seem as though he was not running as fast as he could. He took it hard when the fans booed him, vowing never to tip his hat in Fenway Park again.

"I used to hit tennis balls," Williams recalled. "Old baseballs, balls made of rags — anything." 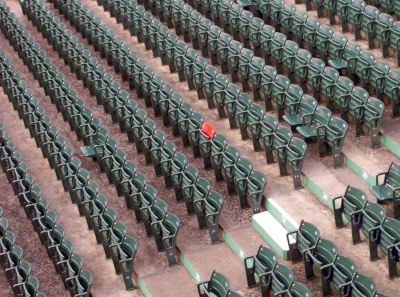 He always felt he had something to prove; irascible and outspoken, Williams was brilliant on the field but defensive and hostile off of it. He regarded the fans as "wolves," and his relationship with the press was not much better. No other man of his day was hounded or photographed more. Although he had his admirers in the press box, it was not unusual for him to be savaged by critics while leading the league in hitting. Twice — in 1942 and 1946, both years he won the American League Triple Crown — Boston sportswriters kept Williams off the MVP ballot. His antagonistic relationship with the fans and the press brought out Williams's contrary personality but also his drive for perfection on the field.

No one cared more about hitting than Ted Williams. Single-minded and stubborn, he reduced the game to a contest between batter and pitcher; his keen eye and steely nerves were a lethal combination. Intense and ingenious, he was the first hitter to use a lightweight bat. In the on-deck circle, he would massage the handle of his bat with olive oil and resin, producing a squeal that rattled pitchers.

Williams came to the plate in the eighth inning and delivered his 29th home run of the season, a record for players 40 years or older.

His finest year was 1941, when he hit .406, the last player to pass .400. He led the league with 37 homers and 145 bases on balls. Practically unstoppable, he should have won the MVP, but the award went to Joe DiMaggio, who had a record 56-game hitting streak and a more charming manner.

His career was interrupted twice by military service. After the 1942 season, he enlisted in the Navy and served as a Marine flier from 1943-1945, returning to lead the Red Sox to the pennant in 1946. In 1952 he missed almost the entire season, serving in the Korean conflict as a fighter pilot. He rejoined the Red Sox late in the 1953 season.

In 1958, at the age of 40, he became the oldest batting champ in Major League history. Two years later, he ended his career in a home game against the Orioles. Williams came to the plate in the eighth inning and delivered his 29th home run of the season, a record for players 40 years or older. He rounded the bases quickly, with his head down. After touching home plate, he went straight to the dugout and stayed there, even as the fans, who had come to love him despite his orneriness, chanted, "We want Ted." As John Updike later wrote, "Gods don't answer letters."

After touching home plate, he went straight to the dugout and stayed there, even as the fans, who had come to love him despite his orneriness, chanted, "We want Ted."

In retirement, Williams became one of the finest fishermen in the Florida Keys. He devoted considerable time and money to the Jimmy Fund, the fund-raising arm of the Dana-Farber Cancer Institute, which has been supported by the Red Sox organization for decades.

In 1966 he was elected to the Baseball Hall of Fame. From 1969-1972, he returned to the game as manager of the Washington Senators and Texas Rangers. He later served the Red Sox organization as an executive, consultant, and spring training instructor. In 1984 the team retired his number.

In 1994 Ted Williams suffered a stroke, and a series of heart attacks followed. He underwent open-heart surgery in 2000, and died on July 5, 2002, at the age of 83, near his home in Inverness, Florida.

At a tribute to Williams in Fenway Park, Number 9 was stenciled in white in the left-field sod, and a single rose was placed on the seat where his longest home run — 502 feet — had landed on June 9, 1946.