Born during the great depression, harassed by the war years, gas rationing four hurricanes and the 1955 flood, the Jacob’s Pillow Dance Festival has achieved success despite adversities. Founder and director Ted Shawn will open the Pillow’s silver jubilee year July 2 with the knowledge that the S.R.O. sign will, as it increasingly has in recent years, be a fairly frequent box-office decoration.

Dancer Shawn purchased the 18th century farm called Jacob’s Pillow in 1930. It consisted of a house built in 1792 and two weather-beaten barns. To Mr. Shawn this was a welcome retreat after two decades of touring the world with his wife, Ruth St. Denis, and their celebrated Denishawn company.

The Denishawn partnership was severed in 1931 and Mr. Shawn in 1932 launched the forerunner of today’s Jacob’s Pillow Dance Festival.

From various colleges, Mr. Shawn selected, organized and trained a group of athletes which became the first all-male dance company in occidental culture in modern times. The barn-studios became the birthplace of men’s group programs which were offered on extensive tours from 1922 through 1940.

Construction on what is known as the Ted Shawn Theater was begun in the Fall of 1941 and opened in 1942. Architect Joseph Franz designed a facility which not only blends with the beautiful Berkshire landscape, but also uses the natural scenery. The back wall of the stage can be made to disappear, thereby providing a natural backdrop of trees and starry skies for certain productions.

Dance critics from major publications throughout the country rate Jacob’s Pillow as the most important festival in the world today devoted exclusively to the dance. Dance is one element of some festivals, and all-dance festivals exist elsewhere, but those festivals limit themselves to one phase of dance. . . .

On this day in 1942, the first theater in the nation dedicated exclusively to dance opened at Jacob's Pillow in Becket, a small town in the Berkshire Hills. The building was named for Ted Shawn, the modern dance pioneer who founded the nation's longest running summer dance festival on a farm he bought in 1930. During the first few years, wartime gas rationing meant that people came on foot, but come they did — drawn by the festival's mix of modern, ethnic, folk, and classical dance. Jacob's Pillow has been home, studio, classroom, and stage to countless dance legends including Agnes de Mille, Merce Cunningham, Alvin Ailey, and Robert Joffrey. Today, the Pillow is considered the nation's home for dance.

Curious audiences paid 75 cents each for a high tea, which Shawn and his dancers prepared and served out of doors, followed by a combination lecture-demonstration. 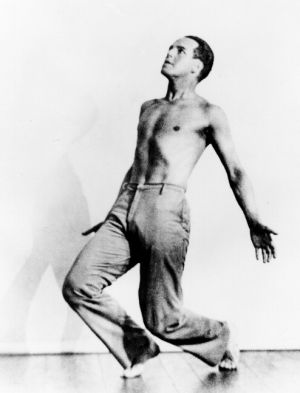 In 1930 modern dance pioneer Ted Shawn bought a 150-acre farm with a beautiful view and an unusual name — Jacob's Pillow. The origins of the name lay in the 1790s when stagecoaches traveling from Boston to Albany passed through Becket on a zigzagging road. To biblically-minded New Englanders, the turns in the road looked like the rungs of a ladder and called to mind an Old Testament story about Jacob. On a journey, the Jewish patriarch stopped to rest for the night and used a stone for a pillow; while sleeping he dreamt that he saw angels going up and down a ladder that reached from heaven to earth. The Berkshire road was named Jacob's Ladder, and the farm at the crest of the hill was named for a distinctive boulder on the site — Jacob's Pillow.

By 1930 Ted Shawn had already won fame as one of the country's finest modern dancers and half of the "Denishawn Company and School." During the 1920s, he and his wife Ruth St. Denis had been stars of the American dance world, popularizing a new form of dance that blended folk traditions, theatrical choreography, and modernism. But when their marriage and business partnership ended in 1930, Shawn bought Jacob's Pillow farm and moved there. He set out to realize a dream; as a gay man, he was eager to dispel stereotypes of male dancers by establishing an all-male dance company whose signature style would be bold and muscular.

He set out to realize a dream; as a gay man, he was eager to dispel stereotypes of male dancers by establishing an all-male dance company whose signature style would be bold and muscular. 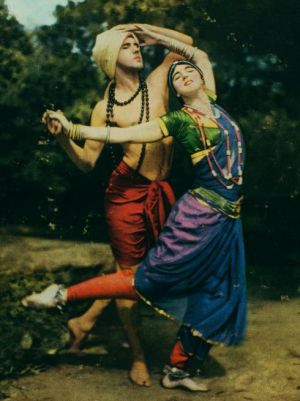 A native of Kansas City, Ted Shawn was studying for the ministry when a bout of diphtheria left him temporarily paralyzed. On his physician's advice, he took up dance as physical therapy and discovered a lifetime passion. In 1933 he formed the Men Dancers Company with eight professional male dancers and a group of physical education students from Springfield College. To raise money, the men gave "Tea Lecture Demonstrations" in the barn Shawn had converted into a studio. Curious audiences paid 75 cents each for a high tea, which Shawn and his dancers prepared and served out of doors, followed by a combination lecture-demonstration. With each passing week, the company's audiences and reputation grew. Soon Shawn was taking his troop on the road and expanding the barn to include classroom space.

By 1940 Shawn felt he had succeeded in legitimizing dance for men. The Men Dancers disbanded. Deeply in debt, Shawn joined forces with dance teacher Mary Washington Ball to produce a festival at Jacob's Pillow that summer. The following year the festival became an international affair, with performances by British ballet stars Alicia Markov and Anton Dolin. The event was so successful that local supporters raised enough money to purchase the farm from Shawn. They hired him as director and began constructing a dance theater.

The inaugural performance was a success, and the festival became an annual event, and later a respected institution, with a reputation for introducing foreign companies, emerging artists, and diverse, eclectic programs. 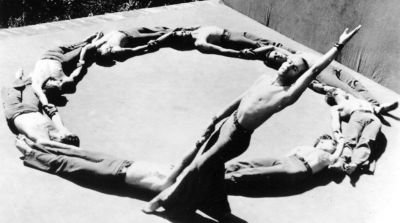 Shawn had helped the Men Dancers put up a rustic dormitory on the farm a decade earlier, and now he helped build the theater that would carry his name. On July 9, 1942, just hours before the first performance, Shawn and architect Joseph Franz (who had recently designed the Koussevitzky Music Shed at nearby Tanglewood),mixed mud and cinders for the walkway, while Agnes de Mille rehearsed a new modern ballet in the theater.

The inaugural performance was a success, and the festival became an annual event, and later a respected institution, with a reputation for introducing foreign companies, emerging artists, and diverse, eclectic programs. Shawn also established a summer school, which he nicknamed "The University of the Dance," where the finest choreographers and dance teachers came to work with the nation's most talented students.

Ted Shawn served as director of the Pillow until his death in 1972 at the age of 81. Affectionately called "Papa" by several generations of young artists, he left a legacy that lives on in the longest-running dance festival in America. The Ted Shawn Theater has recently been renovated, and Jacob's Pillow is now a National Historic Landmark.

On this day in 1902, the writer Edith Wharton wrote to a friend about a visit to the site of her new home, The Mount, under construction in Lenox: "Lenox has had its usual tonic...