On this day in 1888, one of the most ferocious storms of the nineteenth century battered the New England coast. In the seas off Hull, "Storm Warriors," as the men of the United States Life-Saving Service were known, saved 29 lives. One crew rowed 6 ½ miles out to a wrecked vessel and rescued seven sailors. For almost a century, Massachusetts Humane Society volunteers had been helping to rescue mariners in distress. When the federal government formally organized the United States Life-Saving Service in 1878, paid surfmen took over most of the work. The record of human lives they saved was impressive: 99% of the people they tried to rescue survived. In 1915 the USLSS became part of the United States Coast Guard. 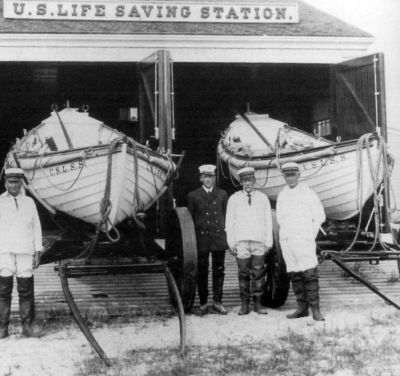 The Massachusetts coast, beautiful as it is, is also the graveyard for thousands of shipwrecked vessels. Cape Cod alone has witnessed more than 3,000 wrecks since the first English settlers began keeping count.

During the age of sail, ships were not only at risk in the open sea, but were also in danger if they found themselves close to shore during a storm. Faced with gale-force winds, captains would lower the sails, but once the canvas was down, the vessels were at the mercy of the sea. Breakers swept the ships up on rocky ledges or sandy shoals where, more often than not, the surf demolished them. Most sailors could not swim, and many drowned; desperate sailors struggled to reach land only to die from hypothermia once ashore. On occasion, people watched helplessly from the beach as tragedy unfolded.

In response, the Commonwealth created the Massachusetts Humane Society in 1786, the first shore-based rescue service in the country. The rescue efforts began with the building of refuge huts stocked with blankets and firewood in Scituate, Hull, and on Lovell's Island in Boston Harbor. Twenty years later the Society commissioned a Nantucket boat builder to construct the first American small craft designed specifically for lifesaving purposes. The 30-foot cork-lined boat was housed at the MHS's first lifeboat station in Cohasset. By 1841 the Society had 81 huts and stations and 18 boats.

Breakers swept the ships up on rocky ledges or sandy shoals where, more often than not, the surf demolished them.

In 1848 the U.S. Congress began providing MHS with funds for its lifesaving stations. But the Service depended exclusively on volunteers and could only do so much. More than 20 years would pass before the federal government became seriously involved. Once it did, MHS volunteers would continue to help in rescues, but their role would decrease as the professional Life-Saving Service grew.

At its height, there were 271 USLSS stations nationwide, 32 of them in Massachusetts. The usual arrangement was for a crew of six paid surfmen and a captain to man stations during all but the summer months. They patrolled the coastline from dusk to dawn, practiced rescue drills, and kept the equipment in good condition. Storms transformed their routine from repetitive to terrifying. The surfmen's motto was "You have to go, but you don't have to come back."

"Ship ashore!" was the standard alarm when a wreck was sighted. Surfmen lit a flare to alert both the ship and the life-saving station crew. Most rescues were executed in surfboats especially designed so they could be launched into and come ashore amidst treacherous breakers. Generally, a boat carried five oarsmen and the captain at the helm. Most could bring five individuals at a time back to safety.

The surfmen's motto was "You have to go, but you don't have to come back."

There were times, though, when to venture out in any boat meant certain death. If the stranded vessel was within 600 yards of the beach, surfmen used what was called a "breeches buoy." Shipwreck victims were transported from ship to shore in a seat made of cut-off pants (breeches), which was fastened to a life ring and suspended from a rope that was thrown from the beach to the vessel.

To make the connection, "Storm Warriors" used a Lyle gun to shoot a projectile with an attached line high into the rigging. (The gun, named after its designer Captain David Lyle, was first worked on and later manufactured for all U.S. life stations at the Springfield Armory.) Often, trying to snare the rigging took several attempts, but once accomplished, men pulled heavier ropes out to the vessel, followed by the breeches buoy, so that one by one, the stranded could be brought to safety.

Between 1878 and 1915, the USLSS went to the assistance of 28,121 vessels and saved 92% of them. In 1915 President Woodrow Wilson signed the "Act to Create the Coast Guard," combining the Revenue Cutter Service and the Life-Saving Service into the United States Coast Guard.

Hull Lifesaving Museum is housed in the Point Allerton Lifesaving Station, which was built after the Great Storm of 1888.