…I was scarcely prepared for the painfully awry conditions that I found in Lawrence, once the leading wool and worsted city in the United States, a half hour's trolley ride from Lowell….

Lawrence, with its tremendous mills, was a "mistake," which the mill owners had been trying to rectify by operating the mills only a little more than was necessary to pay the overhead on the old mills, and thus killing the unions; for when jobless or working only part-time, workers cannot pay their union fees. The process of rectifying this "mistake" was still going on when I came. And it was a painful process to the people —especially the working people — of the city of Lawrence.

I happened to arrive before daybreak on a Monday morning and, walking about, saw hundreds of shabby, silent, hollow-eyed men and women, native and foreign born, going toward the immense, dark mills. I discovered later that very few of them were going to work; most were seeking work. On Mondays they usually went to the mills to learn from the employment managers if any help would be needed during the week. Many of them had been making these Monday-morning pilgrimages for months, some of them for years, getting only a day's or two days' work now and then.

By eight o'clock the great majority of them were returning from the mills. Some had been told to come to work on Wednesday or Thursday or Friday; others, perhaps a majority of them, were told there was no work for them this week. Perhaps next week.

Women hurried home. Men stood on curbs, wretchedness inherent in their every action and aspect; penniless men, most of them without any intelligent, objective idea of what was happening to them, what was going on in Lawrence or in the textile industry. One of them said to me, "I don't know nothing, only that I have no job. No job — no job," he repeated in a shrill, half-hysterical voice.

On this day in 1929, stock markets in Boston, New York, and other major American cities tumbled so dramatically that the day was named Black Tuesday. Capping five days of frenzied panic selling, Black Tuesday marked the beginning of the nation's — and the state's — slide into the Great Depression. By 1934, Massachusetts cities that had once been prosperous centers of textile, shoe, and garment manufacturing were places of desperation. Unemployed workers wandered barefoot outside of shoe factories that had failed. Soup kitchens and bread lines offered food to the starving, but at a high cost to their self-esteem. A Washington relief worker wrote to her boss that "the picture is so grim that whatever words I use will seem hysterical and exaggerated."

While stockbrokers and ruined investors were struggling, by the summer of 1932, the suffering was most acute among textile, shoe, and garment workers whose factories had laid them off. 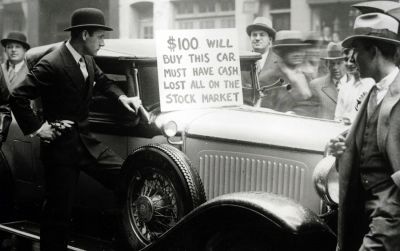 Although the American stock market had sustained steep losses the last week in October of 1929, Tuesday, October 29th is remembered as the beginning of the Great Depression. The Boston Stock Exchange, drawn into the whirlpool of panic selling that beset the New York Stock Exchange, lost over 25 percent of its value in two days of frenzied trading. The BSE, nearly 100 years old at the time, had helped raise the capital that had funded many of the Commonwealth's factories, railroads, and businesses. But after Black Tuesday, investors lost faith in the nation's stock exchanges. The stock market continued its slide, and by its lowest point in July of 1932, the market had lost nearly 90 percent of its value.

In Massachusetts, the lack of capital investment hit the already struggling manufacturing cities such as Lowell, Lawrence, Fall River, and Worcester the hardest. While stockbrokers and ruined investors were struggling, by the summer of 1932, the suffering was most acute among textile, shoe, and garment workers whose factories had laid them off. Even though these workers had strong unions, the unions had no bargaining power. Factories that could not sell their goods for what it cost to make them cut production drastically or failed altogether. The head of the textile union at the time said simply, "Lowell, Lawrence, New Bedford, Maynard and Fall River . . . and most of the mill towns of the Blackstone Valley . . . are sad places." Many of the workers, he added, had been "jobless for months, some for years, and large numbers of those who have jobs work only one or two days a week, earning on average less than $10 a week." Conditions in the shoe towns of Lynn, Brockton, Stoneham, Haverhill, and Newburyport were just as bad. As shoe factories closed for lack of orders, unemployed shoe workers and their families went barefoot.

The head of the textile union at the time said simply, "Lowell, Lawrence, New Bedford, Maynard and Fall River . . . and most of the mill towns of the Blackstone Valley . . . are sad places." 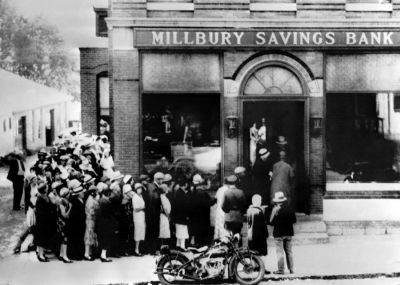 In 1934, when the Depression was at its worst, unemployment in Massachusetts reached 25 percent, and more than half of the jobless had been so for at least a year. As textile and shoe factories closed, the malaise spread to industries that had once supplied those factories. The situation continued to deteriorate.

As evictions increased, families moved in together, sharing overcrowded apartments to avoid life on the streets. Some men became "tramps," moving from one town to another looking for any work or charity they could find. The lucky few who had access to vacant lots planted vegetables to stave off hunger. One Lowell mill worker recalled, "faced with starvation, we began to eat anything that was consumable. During the summer, dandelion greens were on our diet. During the winter, we ate hard bread. . . . Everywhere people starved, raiding garbage to stay alive." Malnourishment brought an increase in tuberculosis, rickets, and anemia.

In 1934 the federal government sent relief worker (and future war correspondent) Martha Gelhorn to document conditions among the unemployed in Massachusetts. Her report was heartbreaking. From Boston to Brockton, unemployed families told her, "We can't live on that $12 (family of 10) — we're going to starve — and my husband can't find work — he's out every day looking —and I get afraid about him — he gets so black. . . . It's a terrible thing when decent people have to beg. . . . What's the use of looking for work any more; there isn't any. And look at the children. How would you feel if you saw your own kids like that: half naked and sick?" Gelhorn concluded, "I could go on and on. It is hard to believe that these conditions exist in a civilized country."

"faced with starvation, we began to eat anything that was consumable. During the summer, dandelion greens were on our diet. During the winter, we ate hard bread. . . . Everywhere people starved, raiding garbage to stay alive."

Gelhorn described the psychic toll the Depression was taking. "I haven't been in one home that hasn't offered me the spectacle of a human being driven beyond his or her powers of endurance and sanity," she wrote. "They can't live on the work relief wages; they can't live on the Public Welfare grocery orders. They can't pay rent and are evicted. They are shunted from place to place, and are watching their children grow thinner and thinner; . . . There they are, for no reason that they can understand, forced to be beggars asking for charity. . . . Their pride is dying, but not without due agony."

On October 29, 1929, the newspapers had no idea of the magnitude of the catastrophe that was about to unfold in Massachusetts and across the nation. In Worcester, the Telegram and Gazette ran a headline, "Bankers Fail to Check Tumbling Stock Prices," followed by a reassuring story that Wall Street was now "Placing House in Order." The larger headline, however, was for a banquet given for presidential candidate Franklin D. Roosevelt in Springfield.

Only with the coming of World War II did jobs and prosperity return to the state. The War Department funded research in emerging technologies. Innovative solutions to defense needs emerged from Cambridge research laboratories, the General Electric plant in Lynn, the Quincy shipyards, and the Springfield Armory. After the war, these new technologies became the basis of the greatest prosperity the Bay State had ever known.

Among of the Great Depression's most enduring legacies are the public works projects that were undertaken with the support of New Deal agencies. Several of the Commonwealth's state reservations and forests have structures built by the Civilian Conservation Corps that are still in use today.

On this day in 1933, the first enrollees of the Massachusetts Civilian Conservation Corps arrived at Fort Devens in Ayer. They were soldiers in a peacetime army that, in the words of the men who...