Leopold Karpeles, a Jewish immigrant from Prague, enlisted with the 57th Massachusetts Infantry in March of 1864. Two months later, the 57th received its baptism of fire in the bloody and indecisive three-day battle of the Wilderness. In an 1870 affidavit, Karples related his actions as Regimental Color Bearer, for which he received the Congressional Medal of Honor:

Your Applicant . . . states that while, his Regiment was engaged in the Battle of the Wilderness on the 6th day of May, 1864, at 5 o'clock P.M., Col., Bartlett commanding said regiment having been wounded, Lieutenant Colonel Charles S. Chandler of said Regiment assumed command. When after 5 o'clock on the 6th day of May, 1864 the right of the 9th Corps commenced breaking and falling back in considerable disorder, the rebels having commenced a flanking movement . . . your applicant being Regimental Color Bearer . . . inquired of the Lieutenant Colonel what was the matter. When he the Lieutenant Colonel answered that he did not know what was the cause of the disorderly retreat of a portion of the Wing aforesaid. When your applicant urged him to stand firm and rally as many of the retreating troops as possible, he said, "All right, I will stand by you." We then, by every possible exertion, by waving the colors and otherwise, were enabled to rally a large number of retreating troops around our Regimental Colors. . . . When they were formed into a line and ordered to advance on the advancing Rebels, they, by a rapid discharge of fire arms, managed to check the enemy and enabled the disordered Wing to form, thereby, as your Applicant believes, saved that portion of the Wing aforesaid from almost total destruction, in which engagement our Colors were very severely shattered.

Online at the Jewish Virtual Library.

Return of the colors reenactment today

There was a reenactment of this event today on Boston Common and at the State House, with the Sons of Union Veterans and several reenactor units participating. About 75 men in Civil War uniforms carried reproduction regimental flags from the common near the Frog Pond through the common to the steps of the State House and inside to Memorial Hall where a ceremony marking the end of the Civil War 150th anniversary events was held.
Login

On this day in 1865, Governor John Andrew officially received the battered regimental colors of Massachusetts units of the Union Army in a solemn State House ceremony called "The Return of the Flags." It had been customary since revolutionary days for the governor to present each regiment about to leave for battle with its own distinctive flag, a symbol of the regiment's honor. The units carried their colors into battle, and since the 1865 ceremony, every Massachusetts regiment returning from war has presented its flag to the governor. That historic collection of over 100 flags adorns the Hall of Flags in the State House, a memorial to all Massachusetts soldiers.

In the din and confusion of battle, soldiers could easily lose track of their comrades; they rallied around their unit's distinctive battle flag. Looking up to see the familiar flag unfurled also helped raise morale. 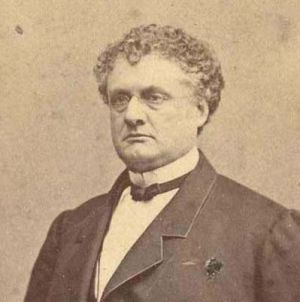 In the spring of 1861, civil war had begun to seem inevitable. Massachusetts was ready. The Massachusetts Sixth Infantry had been organized in January. When President Lincoln called for troops on April 15th, the Sixth assembled in Lowell and traveled by train to Boston. Two days later, as they prepared to leave Boston, the men gathered in front of the State House. Governor John Andrew presented them with their regimental colors.

They had no idea how soon those flags would come under fire. Within days, an anti-Union mob attacked the troops as their train passed through Baltimore. Color Sergeant Timothy A. Crowley of Lowell managed to carry the regimental flag thorough a hailstorm of bricks, cobblestones, and gunfire. The unit chaplain later recalled that "Crowley bore himself gallantly on that trying day. He might have rolled up his colors and escaped the position of prominence which otherwise would subject him to the greatest danger, But no; he unfurled them to the breeze, and bore them on, and . . . they became a guide and an inspiration. Without music, [the soldiers] could only look on that, and follow where it led." Four members of the Sixth Infantry died in the riot, but the flag would remain intact throughout the war.

"He might have rolled up his colors and escaped the position of prominence which otherwise would subject him to the greatest danger, But no; he unfurled them to the breeze, and bore them on, and . . . they became a guide and an inspiration." 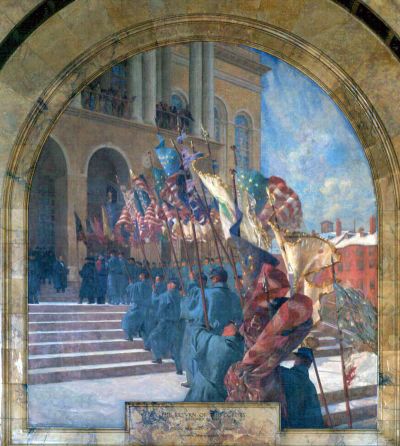 It had long been customary for the governor to present Massachusetts units departing for war with their arms, ammunition, and regimental flags at the State House. As the chaplain's account suggests, a regiment's flag served more than a ceremonial purpose. Troops looked to their colors for both direction and inspiration. In the din and confusion of battle, soldiers could easily lose track of their comrades; they rallied around their unit's distinctive battle flag. Looking up to see the familiar flag unfurled also helped raise morale. Each unit appointed a color sergeant and a color guard of about a dozen soldiers whose responsibility it was to ensure that, as one historian writes, "the emblem of regimental and state honor boldly led the way into battle, yet was not captured by the enemy."

Of course, the enemy was always eager to capture such a powerful emblem, and the standard bearer was frequently one of the first to fall on the battlefield. If he did, one of his fellow soldiers quickly took up the flag and carried it forward. Soldiers equated the flags with the honor of the regiment. If it seemed as though the unit was facing defeat, soldiers would go to great lengths to keep their colors from falling into enemy hands. In one Civil War battle, men in a Massachusetts regiment, realizing that they were about to be captured, wrapped the colors around their staffs and hid them under a log, covered with leaves and grass. A month later, an exchanged prisoner told other members of the unit where to find the flags, which were recovered and returned to the Commonwealth.

"Although half of the officers and a third of the enlisted men . . . were killed or wounded, Corporal Smith continued to expose himself to enemy fire by carrying the colors through the battle."

Soldiers' feelings about the regiment's flag inspired acts of heroism. For example, at the Battle of Honey Hill in South Carolina, Corporal Andrew Jackson Smith, a black soldier in the 55th Massachusetts Infantry, demonstrated "extraordinary valor in the face of deadly enemy fire." After the Color Sergeant was killed by an exploding shell, Corporal Smith took the Regimental Colors from his hand and carried them through heavy grape and canister fire. Although half of the officers and a third of the enlisted men . . . were killed or wounded, Corporal Smith continued to expose himself to enemy fire by carrying the colors through the battle. Through his actions, the Regimental Colors . . . were not lost to the enemy." In 2001 when President Clinton awarded Andrew Jackson Smith the Congressional Medal of Honor, he said "sometimes it takes this country a while, but we nearly always get it right in the end. "

There are now over 400 flags in the State House collection. For many years they hung in the Hall of Flags. In 1987 conservators determined that continuous exposure to the light in the room was damaging the fabric, so today visitors see film transparencies instead of the originals.

The collection of regimental flags at the State House includes the colors of units dating from colonial days to the present. The Hall of Flags, built of Italian marble with a mosaic floor, honors the citizen soldiers who have defended the Commonwealth for over 225 years.

Edward Simmons's mural in the Hall of Flags shows the 1865 "Return of the Flags."

"A Tour of the Massachusetts State House"

On this day in 1861, the Sixth Massachusetts Volunteer Militia was formally organized. With war approaching, men who worked in the textile cities of Lowell and Lawrence joined this new infantry regiment. They were issued...