How proudly it lifts itself against the northern sky, the crested front of the mighty landscape!

…A finer imagination early seized upon the likeness to the grey locks of an old man, which the top of the highest peak presents when whitened by the snows or frosts of late fall or early spring, while the body of the hill is clothed in dark forests; and that summit became Greylock; one of the most poetic names which ever added grace to the loveliness of nature.

On this day in 1898, the legislature established the first state park in Massachusetts on Mount Greylock. The tallest peak in the state, at almost 3500 feet, Greylock is like an island, different in geology, climate, and ecology from its Berkshire County surroundings. But its isolation did not protect it. By the late 1800s, unregulated logging threatened to deforest its slopes. In 1885 a group of concerned citizens bought 400 acres around the summit. In 1898 they turned the land over to the state to protect it forever. In the years since then, the Commonwealth has added 285,000 acres to the state park system, 12,500 of them on Mt. Greylock, making the Massachusetts state park system the ninth largest in the country. 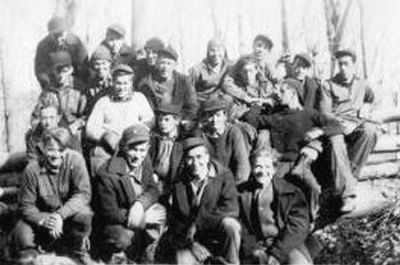 Mt. Greylock and the Hoosic River Valley were once home to the Hoosacs, a Mahican sub-tribe of the Abenaki people. Only the name of the river and neighboring mountain range remain as testament to their long presence in the region.

In the mid 1700s, as tensions between France and England eased, English settlers from eastern Massachusetts, Rhode Island, and Connecticut began cultivating the valley's fertile fields. In a short time, they moved from the valley to the mountainside, clearing the land as they went. Today hikers find remnants of these farmers' efforts —stone walls and old apple trees at elevations of 2,000 feet or more.

When Timothy Dwight, the retired president of Yale, traveled through the area in 1799, he described how one particularly "active and industrious" pioneer farmer had "cut a winding cart road from his house to the summit of this high eminence, rendering the ascent as easy and convenient as can be imagined." This cart road would be the first of many routes up the mountain; the view from the top, in Dwight's words, was "immense and of amazing grandeur."

. . . the view from the top, in Dwight's words, was "immense and of amazing grandeur."

By the early 1800s, the mountain supported farms, extensive sheep herds, and saw, cider, and grist mills, perched alongside fast-flowing brooks. A tannery processed hides in one valley, and men mined iron and copper in another.

Early settlers and travelers referred to the mountain by a variety of names, including Grand Hoosuck, Saddle, and Saddleback. By the 1830s the mountain was known as Graylock, with an "a." "I suppose," wrote Nathaniel Hawthorne, one of an increasing number of visitors to the area, the "name has been given it, because it so often has a gray cloud or lock of gray mist, upon his [sic] head."

In the latter part of the nineteenth century, demand for charcoal fuel for iron furnaces, lime kilns, and glass factories began to take a huge toll, not only on Mt. Greylock but on other Massachusetts forests as well. Loggers did not reseed, and deforestation contributed to frequent forest fires, which fed on the debris left behind. Cleared, burnt hillsides were particularly vulnerable to erosion and landslides.

In the 1880s loggers clear-cut the eastern slope of the mountain, prompting one of the state's first conservation efforts. To protect the mountain, in 1885 local business leaders formed the Greylock Park Association (GPA), which purchased 400 acres on the summit. The GPA built a 40-foot observation tower and improved the road up the mountain. By charging a fee for the use of both, it hoped to make a profit from the growing recreational use of the mountain.

"I suppose," wrote Nathaniel Hawthorne, one of an increasing number of visitors to the area, the "name has been given it, because it so often has a gray cloud or lock of gray mist, upon his [sic] head." 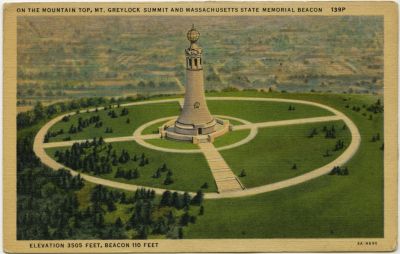 In 1931 work began on a 93-foot tower made of Quincy granite that would stand on the summit as a memorial to those who died in World War I. The beacon was powered by 12 1,500-watt bulbs; said to be the most powerful light anywhere in Massachusetts, it could be seen 70 miles away.

Crowds of paying customers never materialized, and the GPA was losing money. In 1898 the Association offered the property to the state, with the stipulation that the Commonwealth purchase additional land on Mt. Greylock and on nearby peaks. After intense lobbying by recently established environmental organizations, the legislature agreed to the Association's terms.

Lawmakers established Greylock State Reservation and appropriated $25,000; within a year, the state had purchased an additional 3,324 acres on the mountain. Management and operation of the reservation was delegated to a county board, the Greylock Commission, whose primary charge was conservation. In the first decades of the twentieth century, the park grew both in popularity and size. In 1928 a section of the Appalachian Trail, the 2,100-mile footpath that today runs from Maine to Georgia, was blazed across the mountain's southern slope.

The Civilian Conservation Corps came to Greylock in the fall of 1933. Their tasks included building hiking trails, roads, shelters, and downhill ski trails; in 1937 the CCC completed Bascom Lodge, which is made entirely of native stone and wood. Both structures are now part of a National Historic District.

In 1928 a section of the Appalachian Trail, the 2,100-mile footpath that today runs from Maine to Georgia, was blazed across the mountain's southern slope.

In the early 1950s, local businessmen hatched another plan for carrying people up the mountain — an aerial tramway. As developers and conservationists squared off, the full scope of the project became public. The development was to include a ski resort, restaurants, motels, a dance terrace, swimming pool, amusement park, and, in the interest of something for everyone, "an international shopping center."

Faced with economic decline, many people in northern Berkshire County welcomed the development and the jobs it would bring. However, members of the Mount Greylock Protective Association, formed in 1948 in response to clear-cut logging on the mountain, saw things differently. Among their chief objections was that the development violated the state's original commitment to conserving the land. They filed suit and, after years of litigation, in 1966 the Supreme Judicial Court ruled in their favor. The development was dead.

In years to come, other projects would be proposed and the merits of development debated many times over. In late 2006, the state Department of Conservation and Recreation and Adams town officials announced a 15-year plan to build a $43,000,000 outdoor recreation center on the 1,060 acres on the Adams side of the mountain. This time environmental groups that had opposed earlier plans signed on as partners. Will that ensure that this project succeeds where so many others have failed? The Globe reported that the residents of Adams have seen so many other schemes for Greylock Glen collapse, "few are counting on the latest plan." As of 2017, plans for the recreation center were still underway.

Bascom Lodge is open from mid-May to late October.

On this day in 1933, the first enrollees of the Massachusetts Civilian Conservation Corps arrived at Fort Devens in Ayer. They were soldiers in a peacetime army that, in the words of the men who...

On this day in 1964, a raging wildfire crossed the boundaries of Myles Standish State Forest, and into the town of Plymouth. Two days earlier flames had consumed 800 acres of the forest, but firefighters...

On this day in 1838, Nathaniel Hawthorne visited Natural Bridge just outside of North Adams. It was just the kind of awe-inspiring scene that so moved early tourists. A 30-foot-long natural marble bridge — the...