Geisel's step daughter (the daughter of his second wife) was the sculptor of those pieces.
Login

On this day in 2002, Springfield celebrated the completion of a memorial to a hometown hero, Dr. Seuss. Located in the Library and Museum Quadrangle is a bronze sculpture garden peopled with characters from Dr. Seuss's best-known books. The author is there, too, busily sketching the creatures and contraptions beloved by children and adults alike. Growing up in Springfield in the early 1900s, Dr. Seuss — or Ted Geisel as he was known then — found inspiration wherever he went: in the zoo, in the city's parks and fanciful buildings, in streets full of high wheel bicycles and cars and motorcycles produced in local factories. His books revolutionized children's literature and brought the imaginary world of a Springfield boy to millions of readers around the world.

He and the legendary animator Chuck Jones created a series of hilarious but effective army training films. 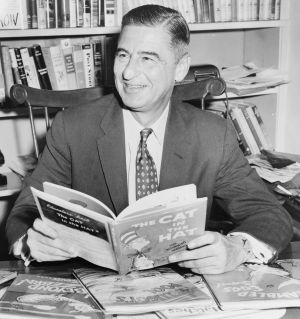 Dr. Seuss was often asked where he got his ideas. For years, he would say, "In a little town near Zybliknov, where I spend an occasional weekend." Later in life, he changed his story. The source of his inspiration was a hamlet in Switzerland called Uber Gletch. The real source of Dr. Seuss's ideas was a city much closer to home: Springfield, Massachusetts.

It was in Springfield that Theodor Seuss Geisel was born on March 2, 1904, to Theodor and Henrietta Seuss Geisel, a well-to-do German American couple. His parents adored him and supported the creativity, imagination, and intelligence he showed from an early age. Growing up in Springfield in the early 1900s, Ted Geisel was surrounded by curious inventions, eccentric architecture, and exotic beasts enough to fill his young head, and the sketchbook he took everywhere, with wild creations of his own.

Just down the street from the Geisels' house was the Massachusetts State Armory — a castle-like building that thrilled the imaginative boy. Springfield's many parks and cemeteries were full of memorials adorned with marble beasts. When Ted was five, his father was appointed to the board of the city's Forest Park Zoo. The two Geisels would often go together on behind-the-scenes tours. Here the wild animals were definitely not made of stone.

Ted Geisel was surrounded by curious inventions, eccentric architecture, and exotic beasts enough to fill his young head, and the sketchbook he took everywhere, with wild creations of his own. 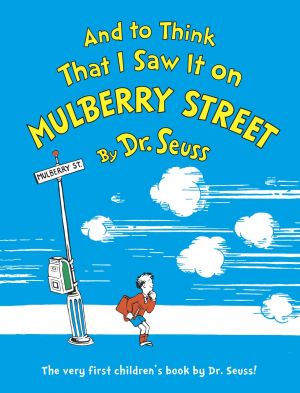 Early twentieth century Springfield was a center of bicycle, automobile, and motorcycle production. These captivating machines whirred and buzzed and moved much faster than a boy could walk; the streets were literally humming with activity.

Cyclists came from all over the country to compete in the city's annual "high wheel" bicycle races. In 1893 two local mechanics, the Duryea brothers, built the first gasoline-powered "motor wagon" in the United States. The early version of the Duryea auto lacked brakes; the driver brought it to a stop by aiming for the nearest curb. As if bicycles and cars were not excitement enough, Springfield was also home to the Indian Motorcycle Company, the largest motorcycle manufacturer in the world.

World War I marked a dividing line in Ted Geisel's young life. Springfield's fanciful buildings, exotic animals, and wacky machines had fired his imagination, but the experience of being an outsider — a German American during a war with Germany — taught him how much it hurt to be shunned and taunted, to be called "the Hun." The experience is reflected in his works that celebrate the triumph of the underdog.

As a student at Central High School, Ted submitted both his writing and his artwork to the school newspaper. His first published piece, a parody of a Walt Whitman poem, made it clear that at the age of 14 Ted Geisel was already a wit. Although he signed his own name to this piece, he soon took to using an assortment of pseudonyms.

At Dartmouth College he first began to sign his work for the student humor magazine with his middle name, Seuss. After graduation, he hoodwinked his indulgent parents into financing a year's study at Oxford. While he supposedly prepared to be an English teacher, he in fact spent much of his time drawing brilliant doodles in his notebooks. He met a young woman, Helen Palmer, who urged him to be an artist rather than a teacher. By the end of the year, Ted was pursuing both art and Helen. The pair married in 1927, and Ted brought his bride back to the U.S. He had no Oxford degree and no job prospects, but he now had confidence in his future as an artist.

While he supposedly prepared to be an English teacher, he in fact spent much of his time drawing brilliant doodles in his notebooks.

Within a few months of returning to the U.S., the Saturday Evening Post published one of Ted's cartoons. He and Helen moved to New York City where they would live for the next 15 years. As his stories and cartoons began appearing in magazines, Theodor Geisel decided to award himself an honorary degree. He became "Dr. Seuss."

A lucrative advertising contract gave Geisel the financial freedom to write children's books. Twenty-seven publishers turned down his first book, And to Think That I Saw It on Mulberry Street, before it was published in the fall of 1937. It quickly became a bestseller. While his next book, Horton Hatches the Egg, was equally successful, it would be seven years before he wrote a third book for children.

In the summer of 1940, as World War II began to ravage Europe, Geisel joined the staff of the liberal magazine PM. Over the next two and a half years, he produced more than 400 hard-hitting political cartoons attacking fascism abroad, isolationism at home, and racial prejudice and anti-Semitism everywhere. However, Geisel's work was not devoid of racial stereotypes present in mid-twentieth century culture. Over time, his illustrations became more open to diversity and promotion of fairness to all.

After Pearl Harbor, Geisel entered the army. Assigned to a filmmaking unit, he and the legendary animator Chuck Jones created a series of hilarious but effective army training films.

"It's subversive as hell. I've always had a mistrust of adults."

Immediately after the war, he continued making films, but by the early 1950s, Geisel had returned wholeheartedly to children's books. As the Cold War intensified, critics blamed the boring books used to teach American children for their poor reading skills. Geisel set out to write something more engaging than Dick and Jane. In the process, he revolutionized children's literature.

Published in 1957, The Cat in the Hat was an immediate hit with children, although educators were slower to see its virtues. The Cat was a troublemaker, who encouraged children to challenge authority, they said. Geisel agreed. "It's subversive as hell. I've always had a mistrust of adults." The Cat in the Hat was the first of an entirely new genre: Beginner Readers that used 225 specific vocabulary words to create hugely entertaining and subtly instructive stories.

Geisel also wrote a number of allegorical children's tales that he hoped would develop young readers' sense of social responsibility and their willingness to question the status quo — Horton Hears a Who, Yertle the Turtle, Sneetches, and his personal favorite, The Lorax.

Ted Geisel died in 1991 at the age of 87. In 2002 Springfield honored him by creating a memorial to Dr. Seuss in the very center of the city that shaped his imagination. In 2017, a museum celebrating the author opened to fans of all ages.

The Seuss, The Whole Seuss and Nothing but the Seuss: A Visual Biography of Theodor Seuss Geisel, by Charles D. Cohen (Random House, 2002).