The Springfield Armory, founded in 1794 by the 3rd Congress on recommendation of George Washington, passed into history Tuesday at approximately 10:40 a.m.

The lowering of the U.S. army flag at the 18th U.S. army band played "Retreat" officially closed the federal facility in its 174th year.

Beneath cloudless blue skies, chilled by breezes of 54 degrees, about 1200 people attended the ceremonies marked by sadness and joy.

… Politicians used well-turned phrases like, "I have come to praise the Armory, not to bury it" and "from bullets to books." But the sentiment of the day was expressed by John C. Garand of this city who was listed on the program as typifying the Springfield Armory employee.

In a voice so filled with emotion that it seemed at times he would not be able to continue, Garand, who designed the semi-automatic rifle which bears his name, noted that "millions of American soldiers, sailors and marines were proud to be called our satisfied customers. We are proud, however, to know that the Springfield Armory reputation and tradition will live on for many generations in the weapons of defense which are now our heritage."

… Retreat was sounded as the security police lowered the Army's U.S. flag. A volley of 20 shots was sounded by four policemen with M14 rifles.

Springfield, a city of Industry, almost a Detroit.

Besides making firearms Springfield was also a center for the automotive industry. The famed Indian Motorcycle was produced there until the early 1950's. The first gasoline powered automobiles were made in Springfield by Charles and Frank Duryea. They started production in 1893 and five years later the brothers parted ways and the company closed. Who knows, if the Duryea Brothers had stayed together maybe Springfield would of been the Detroit of America. Additionally, Springfield was the only place outside of England where Rolls Royces were made, from about 1920 to 1932.
Login

On this day in 1968, there was great sadness in Springfield as the city's historic armory closed its doors after nearly two centuries as the leading producer of small arms for the American military. First established by George Washington early in the Revolutionary War, the armory became a pioneer in mass production, division of labor, and industrial management. Among the most innovative and important weapons it produced were the "Springfield '03" rifle that U.S. soldiers carried in World War I and the classic M1 semiautomatic rifle that played a critical role in World War II. Ten years after the armory was shut down, the National Park Service opened a museum on the site that traces the story of the development of arms and industry in Springfield.

During the WW II years, over 40 percent of the arsenal's workforce, which peaked at 13,500, was female. 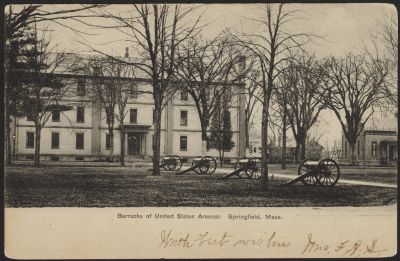 For nearly two centuries, the arms used by American soldiers came from Springfield, Massachusetts. It was there, in a village safe from coastal raids, that the Continental Army gathered and stored its first stock of muskets, cannon, and ammunition. As the nation grew, the Springfield Armory introduced new technologies to arms manufacture. When the U.S. entered the era of modern warfare, the Armory designed and produced most of the rifles that American G.I.s carried.

As early as the 1670s, English colonists used the broad, flat terrain above the Connecticut River at Springfield for military training exercises. A century later, when George Washington needed a safe place to store his fledgling army's munitions, the Chief of Artillery Colonel Henry Knox suggested that "the plain just above Springfield is perhaps one of the most proper spots on every account."

Springfield was a small village, but it was advantageously located: inland, out of reach of the British Navy but on a river with adequate waterpower to support manufacturing. The settlement was large enough to provide labor and supplies. In 1777 General Washington established the "Arsenal at Springfield." The army built barracks, storehouses, workshops, and a magazine. During the Revolution, the Continental Army safely stored its muskets, cannon, and other weapons in the new arsenal.

". . . the plain just above Springfield is perhaps one of the most proper spots on every account."

After Independence, the new federal government decided to maintain the facility. The first challenge to the arsenal came not from a foreign foe but from angry farmers led by Captain Daniel Shays. In 1787 debt-ridden farmers set out to stop the courts from taking their land in lieu of payment. They believed if they seized the weapons at the arsenal, they could use the arms to force the county courthouses to close. But troops defended the arsenal, and the Shay's Rebellion failed.

Only a few years later, the young United States faced the possibility of war with France. Realizing that the nation was too dependent on imported arms, the government decided it was time for the country to produce its own weapons. In 1794 President Washington selected Springfield and Harper's Ferry, Virginia, as sites for the nation's first armories. Now weapons would be made as well as stored in Springfield. The very next year, 40 skilled artisans at Springfield began turning out handcrafted flintlock muskets at the rate of 245 per month.

Crafting the muskets one at a time, piece-by-piece, was painstaking and time consuming; each gunsmith could make only one or two a week. When the inventor Eli Whitney proposed that he could mass produce identical muskets — like pages off a printing press — the government invested in the idea. Although it took nearly 50 years to perfect the process, manufacture of arms, as well as many other products, was transformed by the use of standardized, machine-made parts.

Crafting the muskets one at a time, piece-by-piece, was painstaking and time consuming; each gunsmith could make only one or two a week.

In the early 1800s, the Springfield Armory was a leader in industrial innovation. In 1819 Sutton native Thomas Blanchard designed a lathe that produced identical copies of wooden rifle stocks. Blanchard's lathe meant that gun stocks no longer needed to be made by hand but could be mass produced. The Springfield engineers also perfected machine-produced, interchangeable parts for gun locks. The standardized parts not only speeded up production but made it possible to repair damaged gun locks much more quickly. By the 1840s, the armory was manufacturing percussion ignition rifles, far more accurate and reliable than the flintlock muskets they replaced.

After the Confederate Army destroyed the arsenal at Harper's Ferry, the Springfield Armory was the Union's only small-arms manufactory. It would be the early 1900s before a second armory was built. Springfield was the center of research and production of small-arms and the site of some of the most famous advances in U.S. rifle technology.

In 1900 the armory began making an experimental clip-loading magazine rifle, the "Springfield '03," which was the standard issue rifle for U.S. troops in World War I. Springfield supplied over 95% of the "03s" used in the war effort. Just after the war, a young armory engineer named John Garand designed the famous semiautomatic or "M1" rifle. The army adopted the M1 in 1936 and the Springfield Armory produced 4.5 million of them during WWII. In 1945, General George S. Patton declared that, in his opinion, "the M1 rifle is the greatest battle implement ever devised."

General George S. Patton declared that, in his opinion, "the M1 rifle is the greatest battle implement ever devised."

Many of the guns General Patton praised so highly were made by women. During the WW II years, over 40 percent of the arsenal's workforce, which peaked at 13,500, was female. Drawn from a wide range of racial, ethnic, and social backgrounds, the women worked an average of 56 hours a week, producing and assembling the M1's. Some of them included notes of encouragement with the finished guns, such as "Dear son, give 'em hell, love Mom." At the Springfield Arsenal as at other defense plants, after the war ended, returning soldiers replaced most of the women workers. Not all the women left the work force; some took advantage of their wartime experience to get skilled machinists jobs elsewhere.

In a controversial cost-cutting measure at the height of the Vietnam War, the Department of Defense closed the Springfield Armory. On a cold April morning in 1968, "amid speeches and farewell addresses," the flag was lowered and the gates were closed for what most people thought would be the last time.

Although the vast buildings would no longer belong to the Department of Defense, the armory would not be abandoned. In 1978 the National Park Service reopened it as a museum that tells the story of the armory's 200-year history.

The Springfield Armory National Historic Site includes a large museum in the main building of the old arsenal.

On this day in 1888, Annie Oakley, the star female sharpshooter in Buffalo Bill Cody's Wild West Show, purchased a Model 3 handgun made by the Springfield firm of Smith & Wesson. Horace Smith and...