From the introduction to the first edition of Mastering the Art of French Cooking:

This is a book for the servantless American cook who can be unconcerned on occasion with budgets, waistlines, time schedules, children's meals, the parent-chauffeur-den-mother syndrome, or anything else which might interfere with the enjoyment of producing something wonderful to eat.

We have purposely omitted cobwebbed bottles, the patron in his white cap bustling among his sauces, anecdotes about charming little restaurants with gleaming napery, and so forth. Such romantic interludes, it seems to us, put French cooking into a never-never land instead of the Here, where happily it is available to everybody. Anyone can cook in the French manner anywhere, with the right instruction.

"Too much trouble," "'Too expensive," or "Who will know the difference" are death knells for good food. . . . Cooking is not a particularly difficult art, and the more you cook and learn about cooking, the more sense it makes.

Train yourself to use your hands and fingers; they are wonderful instruments. Train yourself also to handle hot foods; this will save time. Keep your knives sharp. . . . Above all, have a good time.

From Mastering the Art of French Cooking, by Simone Beck, Louisette Bertholle, and Julia Child, (Knopf, 1963)

On this day in 2002, a new exhibit opened in Washington, DC. The kitchen in Julia Child's Cambridge home of 32 years had been disassembled and moved to the Smithsonian. Designed by her husband Paul in 1961, the room was specially tailored to his wife's particular needs, with high countertops to accommodate her six-foot two-inch frame. In her ten cookbooks and eight television programs, several of which were filmed in her own kitchen, Julia Child demystified French cooking for American audiences. She became, in the words of the New York Times, "the French chef for a Jello nation." The exhibit was titled "Bon Appétit!" — as she signed off at the end of every show she hosted during her 38 years as a television icon.

In an era when American "cuisine" consisted of cake mixes, TV dinners, and health food crazes, the book made sophisticated French food not only appealing but accessible. 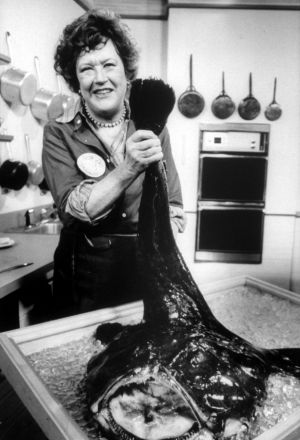 In November of 2001, when the legendary cook Julia Child moved back to her native California, she donated her kitchen and its contents to the Smithsonian's Museum of American History in Washington, DC.

It was in this kitchen that Child cooked for family, friends, colleagues, and, thanks to the Public Broadcasting Service, viewers around the nation. The millions of Americans who watched her shows are intimately acquainted with the homey blue room where Child demonstrated with skill and humor the finer points of French cooking.

Child readily admitted that she was "a gadget freak," and three pantries held numerous specialized utensils and equipment. She labeled nearly everything with masking tape and marker, creating a system that reflected both her sense of organization and her sense of humor. Stoneware crocks labeled "spoonery" and "forkery," for example, sat atop her Garland range. All of Child's gadgets, stored on a custom-made peg-board, her copper cookware, appliances, and other items both practical and whimsical, have been installed in the Smithsonian's Museum of American History exactly as they had been placed when Child made gift to the museum.

Child would later recall that her mother knew how to make "baking powder biscuits, codfish balls, and Welsh rarebit."

Julia McWilliams Child was born in 1912 to a wealthy family in Pasadena, California. The McWilliams kitchen was a "dismal place" where hired cooks prepared the family's meals. Mrs. McWilliams's cooking repertoire was extremely limited. Child would later recall that her mother knew how to make "baking powder biscuits, codfish balls, and Welsh rarebit."

Like her mother before her, Julia attended Smith College, graduating in 1934 with a degree in history. Bright, outgoing, and adventuresome, she went to work for the federal government in the Office of Strategic Services. Assigned to an office job in Ceylon, she met Paul Child, an employee of the State Department as well as an artist and poet. They married in 1946, and his wife soon came to share his love of good food.

In 1947 Paul Child's job took the couple to Paris. Living in the French capital, Julia Child developed what would be the guiding principle of her career: cooking was neither a chore nor a hobby but an art to be seriously studied. She fell in love with French food and enrolled in the prestigious Cordon Bleu culinary school. In 1952 she and two Frenchwomen formed a cooking school and began writing a French cookbook for American readers.

In 1956 the Childs returned to the U.S. and settled in Cambridge, Massachusetts. Julia Child continued work on the book, communicating frequently with her French partners. When Mastering the Art of French Cooking was published in 1961, with 734 pages of detailed but unintimidating recipes, it was a critical and popular success. In an era when American "cuisine" consisted of cake mixes, TV dinners, and health food crazes, the book made sophisticated French food not only appealing but accessible. Child ignored fads, and Americans embraced her "cuisine soignée: long, caring cooking." The publication of Child's work was incredibly well timed; when the Kennedys hired a French chef to cook for them in the White House, Americans were primed for a cookbook about French cuisine written with the American home cook in mind.

In 1962 Boston's public television station invited Child to discuss the book on the air. She arrived with a copper bowl, whisk, apron, and a dozen eggs and proceeded to make an omelet. "I did not know what we could talk about . . . so I brought the eggs," she later explained. Viewers loved the segment, and Child was hired to host what would become the first of eight television series. It was called "The French Chef"— a title chosen because it fit on one line in TV Guide.

"If you are alone in the kitchen," she asked laughingly, "who is going to see?"

Julia Child's appeal lay not only in her obvious skill, but also in her relaxed attitude and fearless approach to fine cooking. She urged viewers to "plunge right in" when boning chickens, and chose not to hide her grunts of effort as she vigorously stuffed sausages. She also believed that mistakes were a normal and useful part of cooking, and soon became known for her ability to recover smoothly after dropping pots or absentmindedly announcing she was about to put a gratin in the refrigerator rather than the oven. "If you are alone in the kitchen," she asked laughingly, "who is going to see?"

Her persona inspired a number of comedic parodies. One of the most memorable was on "Saturday Night Live." Dressed in full drag, Dan Aykroyd imitated Child's wheezy vibrato as he "reenacted" an incident when she cut her hand with a knife. Emulating her composure in times of crisis, Aykroyd, spurting blood, gasped, "Chicken livers are a natural coagulant!" before falling to the floor with a final "Bon appétit!" Child enjoyed the show and was later known to re-play it on tape.

Julia Child continued to appear on television until her late 80s. She died in California on August 13, 2004, two days before her 92nd birthday.

Appetite for Life: The Biography of Julia Child, by Noël Riley Fitch (Doubleday, 1997).