To the honorable Members of the [Baltimore] City Council:

On the 19th of April last an attack was made by a mob in the streets of Baltimore on several companies of a regiment of Massachusetts troops, who were on their way to the city of Washington in pursuance of a call for 75,000 men made by the President of the United States.

. . .On approaching Pratt-street bridge I saw several companies of Massachusetts troops, who had left the [railroad] cars, moving in column rapidly towards me. An attack on them had begun, and the noise and excitement were great. I ran at once to the head of the column, some persons in the crowd shouting, as I approached, "Here comes the mayor." I shook hands with the officer in command, saying, as I did so, "I am the mayor of Baltimore." I then placed myself by his side and marched with him as far as the head of Light-street wharf, doing what I could by my presence and personal efforts to allay the tumult. The mob grew bolder and the attack became more violent. Various persons were killed and wounded on both sides. The troops had some time previously begun to fire in self-defense, and the firing, as the attack increased in violence became more general.

At last, when I found that my presence was of no use, either in preventing the contest or saving life, I left the head of the column, but immediately after I did so Marshal Kane, with about fifty policemen, from the direction of the Camden station, rushed to the rear of the troops, forming a line across the street and with drawn revolvers checking and keeping off the mob. The movement, which I saw myself, was perfectly successful and gallantly performed.

. . . The wounded among the troops received the care and medical attention at the expense of the city, and the bodies of the killed were carefully and respectfully returned to their friends.

The facts which I witnessed myself, and all that I have since heard, satisfy me that the attack was the result of a sudden impulse, and not of a premeditated scheme. But the effect on our citizens was for a time uncontrollable. In the intense excitement which ensued, which lasted for many days, and which was shared by men of all parties, and by our volunteer soldiers as well as citizens it would have been impossible to convey more troops from the North through the city without a severe fight and bloodshed…

The link at the end to the Civil War letters site did not work.
Link doesn't work

I am sorry that the web page cited is no longer available. You can try the following site for another account of the Baltimore Riot, along with primary source links. http://www.civilwarhome.com/baltimoreriot.htm
Login

On this day in 1861, the Sixth Massachusetts Volunteer Militia was formally organized. With war approaching, men who worked in the textile cities of Lowell and Lawrence joined this new infantry regiment. They were issued uniforms and rifles; they learned to drill. They waited for the call. It came on April 15th, three days after the attack on Fort Sumter. They were needed to defend Washington, D.C.. The mood when they left Boston was almost festive. When they arrived in the border state of Maryland three days later, everything changed. An angry mob awaited them. In the riot that followed, 16 people lost their lives. Four were soldiers from Massachusetts. These men were the first combat fatalities of the Civil War.

Clara Barton and her sister Sally Vassal nursed the wounded of the Sixth Massachusetts when they arrived in Washington. 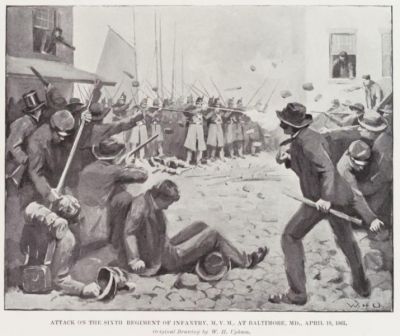 In early January 1861, as civil war approached, the men of Massachusetts began to form volunteer militia units. Many workers in the textile cities of Lowell and Lawrence were among the first to join a new infantry regiment, the Sixth Massachusetts Volunteer Militia, when it was formally organized on January 21, 1861. All through the winter and early spring, the men met regularly to drill. In March, they were issued uniforms and Springfield rifles and told to be ready to assemble at any time. When Fort Sumter was attacked on April 12th, the men of the Massachusetts Sixth knew their days of drilling were over.

Three days later, President Lincoln issued a call for 75,000 volunteers to serve for three months. They were ordered to Washington, D.C. to protect the capital and lead the effort to quash the "rebellion."

Years later the men from Lawrence and Lowell remembered their hurried visits to say good-bye to loved ones and gather supplies before meeting their regiment in Boston. One man from Lowell recalled, "I was working in the machine shop at the time . . . I got my notice at the armory that we were going in the morning. I hired a horse and buggy at a livery stable and drove to Pelham, N.H. where I bade farewell to my sister. I then drove to Tingsboro, as I wanted to see my brother who. . . came with me to Lowell. The mill bells were ringing as we reached Merrimack St."

The Sixth Massachusetts gathered with other regiments in Boston on April 16th. The Lowell Daily Courier published one soldier's letter home: "We have been quartered since our arrival in this city at Faneuil Hall and the old cradle of liberty rocked to its foundation from the shouting patriotism of the gallant sixth. During all the heavy rain the streets, windows, and house tops have been filled with enthusiastic spectators, who loudly cheered our regiment . . . The city is completely filled with enthusiasm; gray-haired old men, young boys, old women and young, are alike wild with patriotism."

Not everyone was celebrating. A corporal from Lowell was more subdued. He wrote to his wife at home, "My heart is full for you, and I hope we may meet again. I shall believe that we shall. You must hope for the best and be as cheerful as you can. But I know your feelings and can judge what they will be when you get this. . . ."

The Sixth Massachusetts Volunteers boarded trains the next day. One soldier reported, "Cheers upon cheers rent the air as we left Boston . . . at every station we passed anxious multitudes were waiting to cheer us on our way." In Springfield, Hartford, New York, Trenton, and Philadelphia, bells, fireworks, bonfires, bands, booming cannon, and thousands of supporters greeted the Massachusetts men as their train passed through.

The mood changed dramatically when the train arrived in Baltimore on the morning of April 19th. Although the state had not seceded from the Union, many Baltimoreans were sympathetic to the Confederate cause and objected strenuously to the presence of northern soldiers.

As one soldier later told a reporter, we "were immediately assailed with stones, clubs and missiles, which we bore according to orders."

Steam engines were not allowed to operate in the city limits, so the regiment crossed the city in train cars drawn by horses. Most of the men made it before a growing mob threw sand and ship anchors onto the tracks. At that point, the soldiers had no choice but to disembark and begin marching.

The commanding officer ordered the men to load their weapons but not to use them unless fired upon. An anxious corporal sent a note to a friend, "We shall have trouble to-day and I shall not get out of it alive. Promise me if I fall that my body shall be sent home."

Four companies of men from Lowell and Lawrence were separated by the crowd from the rest of the regiment. As they attempted to make their way through the city, angry citizens began to shout insults. As one soldier later told a reporter, we "were immediately assailed with stones, clubs and missiles, which we bore according to orders. Orders came . . . for double quick march, but the streets had been torn up by the mob and piles of stones and every other obstacle had been laid in the streets to impede our progress. . . . Pistols began to be discharged at us, . . . Shots and missiles were fired from windows and house tops. . . . The crowd followed us to the depot, keeping up an irregular shooting, even after we entered the [railroad] cars."

Once the surviving members of the Sixth made it to safety, the mob returned to the station on the northern edge of the city. Nearly 1,000 more Pennsylvania and Massachusetts volunteers were waiting there. When the mob attacked, the soldiers moved into the streets. Pro-Union Baltimoreans joined the fight, and some offered to shelter the northern men. In the confusion, a number of soldiers gave up on getting to Washington and walked all the way back to Pennsylvania.

"At Baltimore we heard no cheers, saw no waving of handkerchiefs," one man wrote, ". . . and not a smile greeted us."

Twelve civilians lost their lives at what was later referred to as the Baltimore Riot. Four members of the Massachusetts Sixth, all from Lowell or Lawrence, were killed, including the apprehensive corporal. The regiment became known as the "Minutemen of '61" because this battle took place on April 19, the day the British fired the opening shots of the American Revolution in Lexington and Concord.

When the train finally arrived in Washington, two young women from Massachusetts who had been working in the nation's capital came to the station to nurse the injured — Clara Barton and her sister Sally Vassal. They took many of the wounded men to their home. Thus began the legendary nursing career of Clara Barton, founder of the American Red Cross.

Back in Massachusetts, newspapers printed soldiers' accounts of the riot. "At Baltimore we heard no cheers, saw no waving of handkerchiefs," one man wrote, ". . . and not a smile greeted us. They gave out word that we could not pass through the city, that we should sacrifice our lives if we attempted it. But we received the order 'Forward,' and we did forward, in silence, carrying our flag unfurled. We were fired upon from all parts of the street. I heard the bullets whistle about my ears smartly. At last a stone took me in the head and knocked me down. But I got up immediately and discharged my musket at the rebels, and then kept on the march to the depot. I am here in the hospital with the rest of the wounded. My courage is still good. . . ." In 1865, the City of Lowell erected a monument to the three local men who lost their lives in Baltimore that day.

Visit Doric Hall in the Massachusetts State House where the 6th Massachusetts Volunteer Regiment were issued their equipment before departing for the Civil War.