William Wood came to New England with his father in 1629 when he was 23; he returned four years later and produced a report for the English Puritans on the character and resources of their colony in Massachusetts Bay. The full title is "New England's Prospect. A true, lively, and experimental description of that part of America, commonly called New England; discovering the state of that Countrie, both as it stands to our new-come English Planters; and to the old Native Inhabitants. Laying downe that which may both enrich the knowledge of the mind-travelling Reader, or benefit the future Voyager."

By the side of the [Charles] River is built Newtown, which is three miles by land from Charlestown and a league and a half by water. This place was first intended for a city, but upon more serious considerations it was not thought so fit, being too far from the sea being the greatest inconvenience it hath. This is one of the neatest and best compacted towns in New England, having many fair structures, with many handsome contrived streets. The inhabitants, most of them, are very rich and well stored with cattle of all sorts, having many hundred acres of ground paled in with one general fence which is about a mile and a half long, which secures all their weaker cattle from the wild beasts. On the other side of the river lieth all their meadow and marshground for hay.

My grandfather was born in Cambridgeport. Did Cambridgeport used to be Cambridge or was it a separate place? Why did they call it Cambridgeport? Is there a history of Cambridgeport and how it developed and evolved and disappeared? Thanks so much for any information any one can share to solve this long term mystery for me.
Login

On this day in 1630, the Massachusetts Bay Colony proprietors chose a site along the northern bank of the Charles River for their capital. They named it Newtowne, and laid out an orderly grid of streets fortified by a wooden palisade. It was the first planned town in English North America. Six years later, the colony's first college was established in Newtowne. In honor of the English university town, Newtowne was renamed Cambridge. Contemporary William Wood noted "this is one of the neatest . . . towns in New England, having many fair structures with many handsome . . . seats." Despite its well-ordered appearance, Cambridge did not remain the colony's capital. In 1638 the General Court settled five miles downstream, in the neighboring town of Boston.

By 1644 Cambridge covered an enormous area, including all of present day Brighton, Newton, Arlington, Lexington, Bedford, and Billerica. 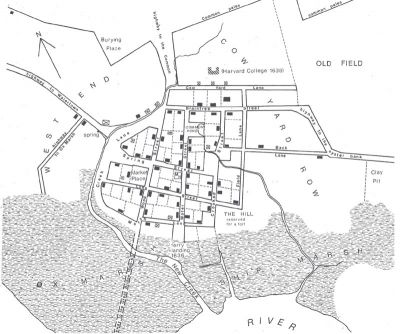 The proprietors of the Massachusetts Bay Colony had several criteria in mind when they decided where to locate their capital. Most importantly, the site had to be relatively easy to defend from attack. It was not Indians they feared most but other Europeans. There were pirates who raided coastal settlements. And there were Englishmen who threatened the independence of the new colony.

The site at Newtowne was ideal; it was not so far inland that it was inconvenient, the river was deep enough at high tide to accommodate oceangoing vessels, and the banks were firm enough to support landings. Furthermore, ships could navigate up the Charles only through a narrow channel, making it treacherous for a mariner unfamiliar with the area — a perfect defense against an attack from the sea. An additional advantage was a gentle hill that the settlers fortified with a wooden palisade.

Newtowne was carefully laid out within the palisade. Four streets ran parallel and three perpendicular to the river. A path along the curving creek at the base of the hill carved out the shape of today's Elliot, Brattle, and Harvard Squares. Within this grid were 64 house lots, a meetinghouse, a school, and a market square; just to the north lay common land for grazing and the future site of Harvard College.

The site at Newtowne was ideal; it was not so far inland that it was inconvenient, the river was deep enough at high tide to accommodate oceangoing vessels, and the banks were firm enough to support landings.

Unlike many early settlements, Newtowne was carefully planned. The residents were not allowed to build their houses close to their farming plots. The founders insisted on compactness, order, and security, all of which they deemed essential for the colony's seat of government. They decreed that "No houses be permitted beyond the palisade," and that "the town shall not be enlarged until all vacant places be filled with houses." To protect against fire, in 1633 they further decreed that "all houses within the bounds of the town shall be covered with slate or board, not with thatch." The result was an uncharacteristically neat village of sturdy, well-built houses.

Newtowne's status as the capital and its name were both to be short lived. In 1630 the General Court moved first to Charlestown and then to Boston. It returned to Newtowne from 1634 to 1636, then alternated between Boston and Newtowne from 1636 to 1638. In 1638 it settled in Boston once and for all.

The General Court awarded Newtowne a consolation prize. It decided that the colony's first college would be situated there. Most of the clergymen who came to New England were graduates of England's Cambridge University, and it seemed appropriate that the new college town should be named after their alma mater. The General Court made the change official in May of 1638. The next year the college in Cambridge was named Harvard.

They decreed that "No houses be permitted beyond the palisade," and that "the town shall not be enlarged until all vacant places be filled with houses."

As more people moved to Cambridge, and as the second generation came of age, farmland became scarce. The legislature addressed the problem by making extensive grants of additional land. By 1644 Cambridge covered an enormous area, including all of present day Brighton, Newton, Arlington, Lexington, Bedford, and Billerica. Eventually, residents of these outlying villages sought to separate from Cambridge, and over the next 200 years Cambridge was gradually reduced to its present size.

In the early years, the only way for Cantabridgians to reach Boston was to take a ferry across the Charles River and then travel eight miles through Brookline to Boston Neck. This was considered such an inconvenience that in 1662 the Great Bridge was built. On the Cambridge side, the bridge was connected to a causeway leading to present-day JFK Street; on the Boston side, travelers would have only a three-mile journey across what is now Allston into Boston. Until the West Boston Bridge was built in 1793, the Great Bridge was the lifeline between Cambridge and Boston. For 130 years, it connected the colony's, and then the Commonwealth's, political and intellectual elites.

The Cambridge Historical Society offers a variety of walking tours, lectures, and other events to engage residents and visitors in conversations about Cambridge history.

The Cambridge of Eighteen Hundred and Ninety-Six: A Picture of the City and Its Industries Fifty Years After Its Incorporation, ed. by Arthur Gilman (Riverside Press, 1896).

On this day in 1809, Oliver Wendell Holmes was born in Cambridge. The man who coined the phrase "Boston Brahmin," he was a true member of that class, and he entertained the nation with poems,...

On this day in 1775, General George Washington commissioned Nicholson Broughton captain "in the Army of the United Colonies of North America." Broughton had a novel assignment: The Marblehead man was to be master of...

On this day in 1921, Henrietta Leavitt, a scientist at the Harvard Observatory, was buried in Cambridge. Her premature death cut short a brilliant career as an astronomer. In the late nineteenth century, observatory director...