CONTE: TOUGHNESS WITH A TWINKLE

WASHINGTON (AP) - Rep. Byron Dorgan's introduction to the demonstrative Republican congressman from Western Massachusetts was anything but cordial.

Conte … was known for entertaining and irritating his colleagues with his vociferous, arm-waving attacks on what he saw as wasteful federal spending.

Garrison, one of the nation's most controversial water projects, was one of his favorite targets….

Dorgan's irritation soon grew into respect over the next decade despite continual battles with Conte, who repeatedly was a thorn in the side of North Dakota lawmakers.

First, it was the Missouri River water project. Then it was the federal honey program, a major moneymaker for North Dakota and South Dakota beekeepers. Conte fought a losing battle to stop the subsidies.

Last year it was a $500,000 grant to develop Lawrence Welk's hometown.

"No matter what he was doing, there was kind of an Italian twinkle in his eye," Dorgan said. "I really came to appreciate and enjoy his considerable skills in the legislative arena."

Dorgan said he spent five years looking for a way to retaliate against Conte. Dorgan combed through appropriations bills trying to find a pork-barrel project in Conte's district. He never succeeded and finally gave up.

"He was always very clever about the way he got things done for his district. I never seemed to be able to find his fingerprints," Dorgan said.

On this day in 1991, Representative Silvio Conte died at age 70. A Republican in a largely Democratic state, more liberal than most members of his party, the Pittsfield native never lost an election in his 32-year career. A powerful figure in Congress for over 30 years, he was a fun-loving and down-to-earth man who maintained a strong bond with his constituents. He was an advocate for public education, medical research, and the preservation of natural resources. One of his last accomplishments was to shepherd legislation through Congress to clean up the Connecticut River and restore its population of Atlantic Salmon. The Silvio O. Conte National Fish and Wildlife Refuge, headquartered in Turners Falls, is named in his honor.

He led the fight for acid rain legislation that culminated in the Clean Air Act of 1990. 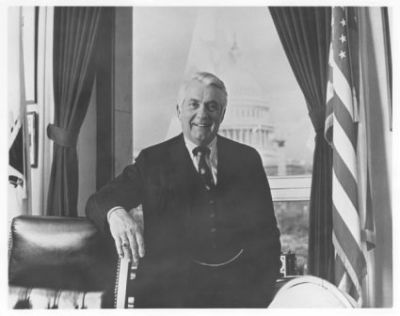 In Congressman Silvio Conte's hometown of Pittsfield, young boys trying to impress their peers would brag, "My old man knows Conte." The problem was that everyone knew Conte.

Conte projected the image of "a regular guy" who would happily "sit at your kitchen table and have a plate of spaghetti and a glass of wine." But, despite his warm personal touch and his devotion to his constituents, Conte was not a parochial politician. From 1959 until his death in 1991, his position on the House Appropriations Committee made him one of the most powerful and influential men in the nation.

Silvio O. Conte was born in 1921 to Italian immigrant parents. He was raised in Lakewood, Pittsfield's working-class Italian neighborhood. Graduating from vocational school in the midst of the Depression, Conte followed his father into the machine shop at General Electric, Pittsfield's major employer.

He might well have stayed there, as most Pittsfield men did, if World War II had not intervened. Conte enlisted in the Navy and served in the South Pacific from 1942-1944. After the war, he took advantage of the G.I. Bill and enrolled at Boston College. After college, he continued at B.C. Law School.

In 1949, Conte returned home to Pittsfield, law degree in hand. He went into practice and almost immediately into politics. His first campaign in 1950 was for the State Senate. He won that race and every other for the rest of his life.

Moving from the state legislature to the U.S. House in 1959, Silvio Conte was immensely popular with the voters of western Massachusetts. He won 17 consecutive Congressional elections, usually taking more than 70% of the vote.

". . . there are people here who wouldn't dream of voting Republican, except for Conte."

His success was remarkable, given that he was a Republican and that his was an overwhelmingly Democratic district. Years later, constituents would remember that "there are people here who wouldn't dream of voting Republican, except for Conte." Originally, he had wanted to run as a Democrat, but Pittsfield's Irish, who had their own candidate, controlled the local party. The ever-practical Conte became a Republican; with the help of his loyal Lakewood friends, he won by a wide margin.

Conte earned a reputation as a politician who took care of his own. He helped the G.E. plant in Pittsfield secure defense contracts and depressed communities in the First District win urban renewal grants. Under his sponsorship, UMass/Amherst researchers received funding and the Connecticut River was revitalized.

Silvio Conte was a hero in the Bay State, especially the part of it he represented. He also exercised power on the national stage. During his very first term in Congress, he received a seat on the powerful House Appropriations Committee, an extraordinary appointment for a newcomer.

He kept that seat and the control it gave him over the nation's purse strings for the rest of his life. Eventually, as ranking minority member of the Committee, Conte was so influential that congressmen, cabinet members, chiefs of staff, White House budget directors, and even the president sought his help.

One reporter called him "an Italian in an Irish milieu, a Republican in a Democratic House, and a liberal in a conservative party."

Politically, Conte was difficult to categorize. One reporter called him "an Italian in an Irish milieu, a Republican in a Democratic House, and a liberal in a conservative party." Although he ran as a Republican, he voted as an independent. Conte frequently supported programs favored by liberals. He consistently fought efforts by Republican administrations to dismantle or cut back those programs. He was a leader in formulating national health care policy and worked tirelessly to increase funding for medical research.

Remembering how the G.I. Bill had transformed his own life, he was a strong proponent of federal funding for student aid, literacy training, vocational education, special education, and Head Start. He was also an environmentalist. He led the fight for acid rain legislation that culminated in the Clean Air Act of 1990, the most stringent industrial pollution legislation in the history of the nation. He sponsored numerous bills to protect wilderness areas, wetlands, and wildlife.

He often took positions at odds with his party. He was one of only three Republicans to vote against the use of force in the Persian Gulf. His colleagues on both sides of the aisle admired his independence and integrity.

Conte was an avid hunter and fisherman and a passionate fan of baseball, which he called "the glue that could hold the most politically polarized group of people together." He regularly read into the Congressional Record laudatory statements about his beloved Boston Red Sox.

The people of Pittsfield remember Conte fondly for his sense of humor. On St. Patrick's Day, he would re-name himself Silvi O'Conte and carry a shillelagh in local parades. A flamboyant, cigar-chomping extrovert, Conte "made friends quickly and forgave foes readily." Thousands of people considered him a personal friend.

Silvio Conte worked in his Washington office until a few weeks before his death in February 1991. He is buried in St. Joseph's Cemetery in Pittsfield.

The Conte Papers at the UMass Library include a chronology and biographical essay.

Biographical Directory of the United States

On this day in 1952, Thomas P. ("Tip") O'Neill of Cambridge announced that he would run for the Congressional seat being vacated by John F. Kennedy as Kennedy began a campaign for the Senate. O'Neill...