At three in the morning,…Shadrach was brought to the Bigelows' house. Mrs. Bigelow was not well. Her husband, however, made a fire in the air-tight stove in her room to get the slave and his rescuer some breakfast, and meanwhile went over to get Mrs. Brooks, a most ardent abolitionist, though law-abiding Squire Brooks said, "But if she is very sick they may want me for something, so I'll go over with you." When there, the door opened, [and when] Mr. Bigelow hear Mr. Brooks' voice down stairs with his wife's, he said, "What shall we do now?" But Mrs. Bigelow said, "There must be no concealment: let Mr. Brooks come up." Mr. Brooks with his wife entered Mrs. Bigelow's chamber and to their surprise found Mr. and Mrs. Bigelow, Mr. — and Shadrach the fugitive. Squire Brooks saw what was going on at once, but here was an abstract matter hitherto now presented to him in the most concrete form.

They were fitting Shadrach out with clothes. Mr. Bigelow's hat wouldn't fit him, but the man of law straightway zealously ran across the road to his house and fetched his own hat, sheltered by which Shadrach departed for the North Star, driven by Mr. Bigelow with a horse got from the stables near by (his own horse was white, well known, and hence unadapted for contraband service) in the wagon of Lowell Fay, another near neighbor.

Next day Mr.Cheney … said sharply to Mr. Brooks, "Shadrach was brought to Concord," which statement the Squire had to bluff off as best he might, but he was now liable to fine and imprisonment for violating the sacred law of the land.

Thank-you! It is a privilege to be a teacher with such solid resource material to draw from! Your summary of the Shadrach Minkins story is a wonderful tribute to the history of African peoples in America... Thanks again! ------------------------- Yvonne Powell
Login

On this day in 1851, a group of outraged African American men burst into a courtroom in Boston and rescued Shadrach Minkins, the first escaped slave seized in New England under the 1850 Fugitive Slave Law. Under the new law, northern authorities were required to help owners recapture slaves who had escaped to the North. When Shadrach Minkins's master found out that he was in Boston, he had U.S. marshals arrest him. They took him to the federal courthouse in Boston, where an angry crowd gathered. They stormed the courtroom and freed Minkins. He was taken to a hiding place on Beacon Hill. That night, he began his journey on the Underground Railroad. Six days later, he arrived safely in Canada.

Anyone who aided an escaped slave or interfered with his or her arrest was subject to fine and imprisonment. 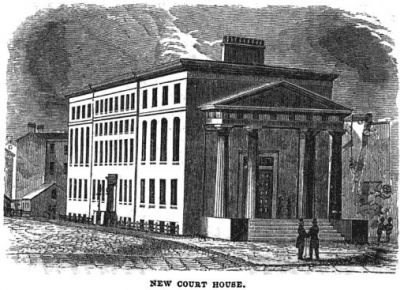 Shadrach Minkins was born into slavery and lived his first three decades in the port city of Norfolk, Virginia. In the years before the Civil War, many enslaved people fled Norfolk in hopes of traveling undetected across the Mason-Dixon Line. Not all were successful, but Shadrach Minkins was.

In May of 1850, he made his way to Boston. At mid-century, 2,500 African Americans lived in the city and surrounding area. Newcomers found a vibrant free black community. They also found a large number of active abolitionists, both black and white.

Southerners had occasionally tried to reclaim enslaved men and women who had taken refuge in Boston, but local hostility to slavery made that task nearly impossible. Those who reached Boston could expect to be absorbed into the city's black community or, if they wished to move on, helped along on the Underground Railroad.

The situation changed dramatically in the fall of 1850. In an attempt to find a compromise that would save the Union, Congress passed the Fugitive Slave Law in September of 1850. The new law empowered slave owners or their agents to seize runaways, backed up by nothing more than their sworn testimony. Law-enforcement officials throughout the North were now required to arrest suspected fugitives and assist in returning them to their owners. Anyone who aided an escaped slave or interfered with his or her arrest was subject to fine and imprisonment.

In cities all over the North, fugitives were now in danger of being seized by "slave hunters" and returned to their masters. Many enslaved men and women left the United States altogether for safety in Canada. Others, like Shadrach Minkins, decided to stay and take their chances.

In cities all over the North, fugitives were now in danger of being seized by "slave hunters" and returned to their masters.

Minkins had only been in Boston for a few months when the Fugitive Slave Law was passed. He had been fortunate to find steady work as a waiter in a coffee house in the center of Boston and was lodging there, too. But on February 15th, his luck ran out.

Three days before, John Caphart, a constable and professional slave hunter from Norfolk, had arrived in Boston bearing legal papers from Minkins's master. Under the new law, all he had to do was get an arrest warrant for Minkins, bring him before a judge, and identify him as a fugitive.

Caphart knew that abolitionist lawyers and angry mobs had thwarted previous attempts to reclaim runaways in Boston. So he worked carefully, quietly securing the warrant and planning to capture Minkins before anyone could interfere.

In the early morning of Saturday, February 15th, Caphart put his plan into action. Patrick Riley, a deputy U.S. Marshal, was responsible for arranging the seizure. At dawn, Riley and his men gathered outside of the coffee house, where they hoped to take Minkins into custody before the city was fully awake.

When he heard that Minkins was already at work, Riley scheduled the arrest for 8:00 AM, but it was inexplicably postponed for three hours. The unsuspecting Minkins brought Riley and his deputies coffee while they waited for a man who had promised to identify the fugitive.

When the man failed to appear by 11:30, Riley began to worry that news of the plan would leak out and a mob would form to stop it. The deputies went to find out what was causing the delay. By chance, Minkins left the coffee house at the same time. A group of marshals was waiting outside. Thinking this was their signal, they grabbed Minkins, marched him out the back passageway, and directly across the street into the federal courthouse.

The unsuspecting Minkins brought Riley and his deputies coffee while they waited for a man who had promised to identify the fugitive.

By this time, however, it was nearly noon, and many passersby had witnessed the episode. Word spread quickly, and soon about 200 people had gathered in the courtroom and hallways and on the steps of the courthouse. Abolitionist lawyers rushed to offer Minkins their assistance. There was little they could do, however, since the seizure was legal under the Fugitive Slave Law.

The lawyers stalled for time, and the crowd outside grew larger and angrier. In the afternoon, a judge ordered a hearing for the following Tuesday. Riley and his officers began clearing the courtroom. As the courtroom spectators joined the throng in the hallway, an already tense situation exploded.

According to one witness, a black man in the hallway rushed forward crying "Boys are you ready? Now is the time or never!" The furious mob rushed the courtroom door, overpowering the marshals inside. About 20 black men grabbed Minkins "by the collar and feet" and ran out the door, down the hallway and stairs, and into the crowded street. The crowd was so large and so hostile that the marshals dared not pursue the rescuers.

Free African Americans and white abolitionists savored what they saw as a victory over the Fugitive Slave Law.

The atmosphere outside was jubilant and chaotic. Finally, the black activist Lewis Hayden separated Minkins from the crowd and took him to a hiding place on Beacon Hill. A few hours later, Hayden smuggled Minkins out of Boston to Cambridge and that night took him by carriage to an Underground Railroad stop in Concord.

Concord's abolitionists made sure Minkins had food, clothing, and rest. Then they saw him safely on his way to Fitchburg and from there to Canada.

In Boston there was both celebration and recrimination. Free African Americans and white abolitionists savored what they saw as a victory over the Fugitive Slave Law. But the federal government responded with a barrage of arrests and trials for people who had assisted Minkins in his escape. Nine abolitionists were indicted, and some of them — including Lewis Hayden — were put on trial. All were eventually acquitted.

Shadrach Minkins settled among other fugitive slaves in Montreal, married, raised a family, and made his living as a barber. While as many as two-thirds of American-born blacks in Canada returned to the U.S. after the Civil War, Minkins did not. He lived out his life among black expatriates in Montreal, dying on December 13, 1875.