Sen. Edward W. Brooke yesterday appealed for increased cooperation from authorities in Boston—including the mayor and police commissioner—and tenants “to improve the quality of life” in housing projects.

He made the appeal after an early morning inspection of federally assisted public housing projects. He termed conditions he found “a disgrace.”

Brooke’s fact-finding tour went through five project developments and concluded with an hour-long hearing at the Paul Dever School in Dorchester. During the 60-minute session, the senator was told that because of fear for her safety, one tenant has not left her apartment in three years; another woman paces her living room, often armed with a gun, fearing her apartment may be mistaken for the one directly above where drugs are sold; elderly tenants travel in groups to shop to keep from being mugged.

The hearing was scheduled to explore faulty maintenance and security conditions and to lend documented support to legislation, introduced recently by Brooke.

His bill would lift the limit on money which could be allotted to individual housing authorities through the Department of Housing and Urban Development (HUD). Boston’s limit is set at $2 million.

“There’s no excuse for (projects) to be kept this way,” he said.

On this day in 1919, Edward Brooke, III, the first African American to represent Massachusetts in the U.S. Congress, was born. A decorated veteran, he graduated from the BU School of Law in 1948 and began practicing in Roxbury. In 1966, after serving as the nation's first African American state Attorney General, Brooke achieved another first: He became the first black person ever elected to the U. S. Senate by popular vote. In his two terms in Congress, he worked for civil rights, fair housing, consumer protection, and arms limitation. When the Watergate scandal broke, he was the first senator to call on President Richard Nixon to resign. In 2000 the state recognized his accomplishments by naming a new Boston courthouse in his honor.

In 1960 Brooke became the first African American to be nominated by a major party for a statewide office in Massachusetts when he ran as the Republican candidate for Secretary of State. 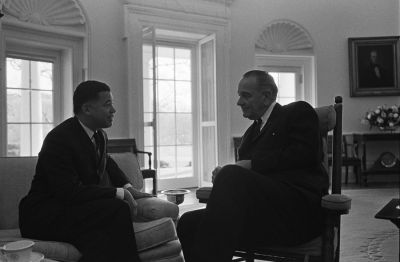 Growing up in his native Washington, D.C. during a period of racial discrimination and segregation, Edward Brooke III would blaze a trail of historic firsts for his fellow African Americans.

Brooke's father was a Howard University School of Law graduate, who had a 50-year career as an attorney for the Veteran's Administration. Young Edward grew up in Washington, D.C., excelling in the city's public schools and entering Howard himself at the age of 16. He earned his B.S. in sociology in 1941, just months before the U.S. entered World War II.

Brooke had his first courtroom experiences as a soldier. The army remained segregated until 1948, so he joined an all-African American infantry regiment stationed at Fort Devens, MA. Armed with only his college degree and what he had learned from conversations with his father, he volunteered to defend enlisted men who found themselves in military court. His unit was sent to Italy, where in 195 days of combat, he earned a promotion to captain, a Bronze Star, and a Distinguished Service Award.

Armed with only his college degree and what he had learned from conversations with his father, he volunteered to defend enlisted men who found themselves in military court.

After the war, Brooke enrolled in Boston University Law School and encountered a racially integrated institution for the first time. Once again he excelled, winning the prestigious position of editor of the B.U. Law Review. When he graduated, he opened an office in Roxbury and became actively involved in civil rights and veterans' causes. At the urging of friends, he declared his intention to run for public office, the first of many path-breaking decisions.

In 1960 Brooke became the first African American to be nominated by a major party for a statewide office in Massachusetts when he ran as the Republican candidate for Secretary of State. He lost that first bid; two years later, he won the race for Attorney General, making Massachusetts the first state in the nation to elect an African American to the office of Attorney General. He soon gained a national reputation by taking on corruption in government and organized crime. He conducted the "Boston Strangler" investigation, advocated strong consumer protection laws, and battled housing discrimination. In 1966 he waged a successful campaign for the U.S. Senate.

Edward Brooke served in the Senate until 1979, when he lost his seat to Democrat Paul Tsongas. In 2004 he received the Presidential Medal of Honor, the nation's highest civilian honor. On October 29, 2009, three days after his ninetieth birthday, Brooke received the highest honor Congress can bestow, the Congressional Gold Medal.