My eldest brother had been admitted to one of the public schools in Salem, and at a much later period the three youngest children, including myself, were admitted to one of the public primary schools. All went on well for a time and the children generally treated us kindly, although we were very frequently made to feel that prejudice had taken root in their hearts. My sister and I remained in this school a very short time, passed the examination, and entered the high school for girls…. We had been in this school a very short time, when we were informed that the school committee contemplated founding a school exclusively for colored children.

They intended to found a school for young and old, advanced pupils and those less advanced: boys and girls were all to occupy but one room. The many disadvantages can be seen at a glance. It did not matter to this committee, who merely reflected the public sentiment of the community, in what district a colored child might live; it must walk in the heat of the summer, and the cold of winter, to this one school. But more than all this, it was publicly branding us with degradation. The child of every foreigner could enter any public school, while the children of native-born parents were to be thus insulted and robbed of their personal rights.

My father waited upon the school committee, and most earnestly protested against their proposed plan. We still continued to attend the school, but felt much anxiety. One morning, about an hour before the usual time for dismissing pupils, the teacher informed us that we would no longer be permitted to attend the school, that he had received orders from the committee to give us this information, and added, "I wish to accompany you home, as I wish to converse with your parents upon the matter." Some of the pupils seemed indignant, and two expressed much sympathy. I had no words for any one; I only wept bitter tears, then, in a few minutes, I thought of the great injustice practised upon me, and longed for some power to help me to crush those who thus robbed me of my personal rights.

Years have elapsed since this occurred, but the memory of it is as fresh as ever in my mind. We had been expelled from the school on the sole ground of our complexion. The teacher walked home with us, held a long conversation with our parents, said he was pained by the course taken by the school committee, but added it was owing to the prejudice against color which existed in the community. He also said we were among his best pupils, for good lessons, punctuality, etc. Add to this the fact that my father was a tax-payer for years before I was born, and it will need no extra clear vision to perceive that American prejudice against free-born men and women is as deep-rooted as it is hateful and cruel.

On this day in 1853, Sarah Parker Remond and two other African Americans entered a Boston theater intending to enjoy a Mozart opera. When the manager discovered they were people of color, he directed them to the segregated balcony. Remond and her companions refused to sit there. When they were asked to leave, an argument ensued, and the police were summoned. One of the officers handled Sarah roughly. Refusing to be intimidated, she sued and won $500 in damages. The Remond family challenged discrimination on all fronts. Sarah's brother Charles was the first black man to testify before the Massachusetts House when he protested being forced to sit in segregated railway cars, another example of the racism Massachusetts blacks faced in their home state.

The Remonds played host to many of the movement's leaders, both black and white, and to more than one fugitive slave. 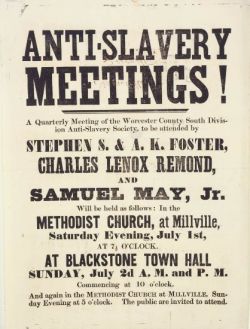 Sarah Parker Remond was in her late twenties when she committed her first act of civil disobedience, but she was a young girl when she first encountered racial prejudice.

Her mother Nancy was the Newton-born daughter of a man who fought in the Continental Army; her father John was a free black man who arrived from the Dutch island of Curacao as a ten-year-old boy in 1798. The Remonds settled in Salem, where they built successful catering, provisioning, and hairdressing businesses.

Although they were prosperous free citizens of Massachusetts and protective parents, they could not shield their eight children from racial discrimination. The family set great store by education, and in 1835, Sarah and her sister passed the examination to enter Salem High School. Within a week, a segregationist school committee forced them to leave the school. Outraged, the Remonds moved to Newport, RI, where Sarah attended a private school for black children. John Remond helped mount a campaign to desegregate the Salem schools. The campaign succeeded, and in 1841 the family returned home. Now too old for the classroom, Sarah continued her education by reading widely and attending concerts and lectures.

". . . When I consider that the only reason why I did not obtain what I so much desired was because I was the possessor of an unpopular complexion, it adds to my discomfort."

Salem in the 1840s was a center of anti-slavery activity. The Remonds played host to many of the movement's leaders, both black and white, and to more than one fugitive slave. When Robert Forten, Philadelphia's leading black abolitionist, wanted to send his daughter Charlotte north to school, he chose to have her live with them.

Sarah Remond's father was a life member of the Massachusetts Anti-Slavery Society. Her older brother Charles Lenox Remond was the American Anti-Slavery Society's first black lecturer and the nation's leading black abolitionist until Frederick Douglass appeared on the scene. Charles's testimony in 1842 helped secure passage of a state law prohibiting separate rail cars (although it was only in 1865 that the Massachusetts legislature acted to forbid "unjust discrimination on account of color or race" in "any place of public amusement, public conveyance, or public meeting.")

Along with her mother and sisters, Sarah was an active member of the state and county female antislavery societies. Although her sisters followed their parents' trade and became caterers, bakers, and hairdressers, Sarah made a different — and highly unusual — choice. With the moral and material support of her family, she became an anti-slavery lecturer.

When she sailed in September 1858, she told Abby Kelley Foster, she feared not "the wind nor the waves, but I know that no matter how I go, the spirit of prejudice will meet me."

In 1856 at the age of 30, she began her career as a public speaker, touring New York with other agents of the American Anti-Slavery Society that included her brother Charles and another courageous Massachusetts woman, Abby Kelley Foster. Abby Foster's example and encouragement were critical in Sarah Remond's decision to take the step of becoming a public speaker. "I feel almost sure," Sarah wrote to Abby, "I never should have made the attempt but for the words of encouragement I received from you. Although my heart was in the work, I felt that I was in need of a good English education.. . . When I consider that the only reason why I did not obtain what I so much desired was because I was the possessor of an unpopular complexion, it adds to my discomfort."

Although she was inexperienced, Sarah Remond proved to be a natural on the stump. William Lloyd Garrison praised her "calm, dignified manner, her winning personal appearance and her earnest appeals to the conscience and the heart." Over time, she became one of the Society's most persuasive and powerful lecturers. She addressed crowded anti-slavery meetings in Massachusetts, New York, Ohio, Michigan, and Pennsylvania.

Sarah Parker Remond proved to be such a good speaker and fundraiser that abolitionists in Great Britain invited her to help promote the cause on their side of the Atlantic, as her brother had done ten years before. When she sailed in September 1858, she told Abby Kelley Foster, she feared not "the wind nor the waves, but I know that no matter how I go, the spirit of prejudice will meet me."

". . . prejudice against colour has always been the one thing, above all others, which has cast its gigantic shadow over my whole life."

In fact, she met with acceptance in Britain. "I have been received here as a sister by white women for the first time in my life," she wrote; "I have received a sympathy I never was offered before." She spoke out against both slavery and racial discrimination, and stressed the sexual exploitation of black women under slavery. She played an important role in drawing British abolitionists' attention to the discrimination suffered by free black people throughout the United States. In a short autobiography, written in 1861, she stressed that "prejudice against colour has always been the one thing, above all others, which has cast its gigantic shadow over my whole life."

A clear and forceful speaker, Sarah Remond lectured to enthusiastic crowds in cities throughout England, Scotland, and Ireland, and raised large sums of money for the anti-slavery cause. Once the Civil War began, she worked to build support in Britain for the Union blockade of the Confederacy and did much to influence public opinion in Britain in support of the North. At the end of the war, she lectured on behalf of the freedmen, soliciting funds and clothing for the ex-slaves.

During her years in Britain, she combined lecturing with studying at the Bedford College for Ladies (now part of the University of London). In 1866 she left England for Florence, Italy, and at the age of 42, entered medical school. She became a doctor, married an Italian man, and apparently never returned to the United States. She preferred her self-imposed exile to life under "the gigantic shadow" of racism.

Sarah Parker Remond is one of the women honored in the State House artwork, HEAR US.

We Are Your Sisters: Black Women in the Nineteenth Century, ed. by Dorothy Sterling, W.W. Norton, 1997).

"The Remonds of Salem, Massachusetts: A Nineteenth-Century Family Revisited," by Dorothy Burnett Porter in Proceedings of the American Antiquarian Society, Vol. 95. 1985.