If we take a Retrospect of two or three Years past, we shall find that what our "PRETENDED patriots", as they were stiled in the Court Gazette, so zealously forewarn'd us of, has since turn'd out to be a Fact; that every art would be made use of to lull the people of this Province and Continent into Security, in order that the Conspirators against our Rights and Liberties might carry on their Schemes and compleat their system of Tyranny without Opposition or Molestation.

The first part of their plan, they imagin'd they had finish'd; that is, the Establishment of a Revenue: And though this was far from being sufficient to answer their whole purpose, they thought that if they could put the people to sleep, they might the more easily add to this revenue, at some future time, and plead the present submission for a precedent. They therefore began upon the second and equally important part of their plan, which was to appropriate the revenue they had rais'd, to set up an Executive, absolutely independent of the legislative, which is to say the least, the nearest approach to absolute Tyranny.

The Governor, who was the first American PENSIONER, had now an exhorbitant Salary allowed him out of the monies extorted from the people. . . But the people, whom they generally . . . treated with an air of contempt, as an unthinking herd, had a better understanding of things than they imagined they had. They were almost universally disgusted with the Innovation, while the advocates for it were yet endeavoring to make the world believe, that the opposition to it arose from a few men only, of "no property" and "desperate fortunes," who were "endeavoring to bring things into confusion, that they might have the advantage of bettering their fortunes by plunder."

Regardless one's views of the "revolution," Sam Adams was a demagogue and propagandist. And a most morally repugnant of individuals: his goal was not "revolution" and "independence" but the "resstablishment" of "Puritan virture" -- which had never existed to begin with. And in pursuit of that ambition, he never missed an opportunity to lie, cheat, steal and murder to that end. As for the "taxation without representation" campaign: when first elected to the General Court, he was under indictment for misuse of tax monies. How did he come to be in possession of tax monies? He was a tax-collector for the Crown. Much of his legislative success was direct result of his use of brown-shirt tactics -- the "Sons of Liberty" were street gangs, thugs -- to intimidate the opposition, which included actual physical assault of other legislators. ------------------------- A lie is halfway around the world before the truth can get its shoes on. -- Mark Twain
Sam Adams, anti-Catholic?

The ensuing quote, taken from the May 26, Mass Moments,"Massacusetts Bay Colony Bans Catholic Priests," indicates there may of been an anti-Catholic side to Sam Adams, consider: Speaking in 1768, "Samuel Adams proclaimed that the growth of popery posed an even greater threat than the hated Stamp Act."
Samuel Adams

The bigger question and more important to our lives today involves how an idea becomes popular. What is the arc of an idea? Most ideas, movements over time go from being radical to being acceptable and sometimes to becoming unacceptable again. Given the case of Sam Adams, are violence and criminal activity necessary? What other means are available? How are ideas imparted now? Are there people who are expounding ideas rather than sound bites? We have such a rich history of people who did work at popularizing ideas-are there any people like that now?
Leaders

First off, "lead," as in "...that eventually lead to the Boston Massacre," should be "led." Of greater import, however, it should be noted by those criticizing Adams for being a man of his time and for being too belligerent, that if guys like him had not led (!) their countrymen away from the tranquility of servitude, we'd be in a much worse position now, i.e., crouched down.
Login

On this day in 1803, the fiery patriot Samuel Adams died at the age of 81. A complete failure as a businessman, he was a brilliant political organizer, a talented writer, and a passionate public speaker. He founded the Sons of Liberty and was almost certainly the main instigator of the Boston Tea Party. He helped organize a movement to boycott British goods and devised the notion of uniting towns through Committees of Correspondence. He called for representatives of all Britain's American colonies to gather together. When they did, he was chosen a delegate to the first Continental Congress. He was able to go to Philadelphia only because his friends provided him with a new suit, wig, shoes, silk hose, and money to cover his expenses.

His detractors called him a rabble rouser, an instigator, and a dangerous troublemaker. 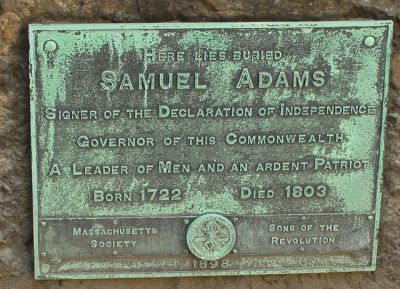 When Samuel Adams died in 1803, he was mourned as one of America's greatest patriots. He had served in the U.S. Senate and as governor of the Commonwealth. But in his heyday as one of the most radical members of the revolutionary generation, Samuel Adams had a more mixed reputation. His detractors called him a rabble rouser, an instigator, and a dangerous troublemaker. To those who shared his dedication to the cause of independence, he was a gifted political organizer and a passionate and articulate spokesman.

Born into a prosperous Boston family, he soon squandered most of the advantages of his position. His father sent him to Harvard and then supported him while he studied law; young Adams decided not to be a lawyer. His father helped to set him up in business; the large sum his father had provided was soon gone. Adams was 26 when his father died; over the next ten years, he lost most of his inheritance, including a house in Boston and his family's brewery, and ran up debts he could not pay. At mid-life, Samuel Adams was barely able to support his wife and two children. He depended on his wife's domestic economies and the gifts of neighbors. By 1764 when the British Parliament began to crack down on the colonies, he gave up any attempts at business and devoted himself to politics.

His cousin, John Adams, called him "a universal good character . . . unless it should be admitted that he is too attentive to the public, and not enough to himself and his family."

Samuel Adams may have been a complete failure as a businessman, but he had a talent for political organizing. He was sociable, articulate, and politically astute. He wrote brilliant letters and newspaper pieces criticizing the conservative elite. He was a passionate public speaker and knew how to rouse the emotions of the common people. His cousin, John Adams, called him "a universal good character . . . unless it should be admitted that he is too attentive to the public, and not enough to himself and his family."

After 1764, when the quarrel between the colonists and Parliament grew increasingly bitter, Samuel Adams had little time for anything other than politics. He was an early convert to the cause of independence, and set about inflaming public sentiment against the British crown. He played a leading role in opposition to the Townshend Acts and in the movement to boycott British goods, and stirred up popular hatred of the Redcoats quartered in Boston — a hatred that eventually lead to the Boston Massacre.

Whenever the momentum towards revolution seemed to slow, Samuel Adams found a way to stir up controversy and incite mobs to action. In 1774, he began publishing anti-British articles in the Boston papers. His writing fanned public fears that the king and Parliament were conspiring to deprive the colonists of their liberty. Having devised the notion of uniting towns through committees of correspondence, he drafted declarations of rights and grievances for them to adopt.

"If ye love wealth greater than liberty, the tranquility of servitude greater than the animating contest for freedom, go home from us in peace."

After the war, Samuel Adams used his revolutionary credentials to secure positions in the new government. He served a term as senator in the 1780s and as governor in the 1790s, but he was no longer the commanding figure he had once been. He led a quiet life until his death at age 81. His powers of persuasion are remembered in the words he addressed to those of his countrymen who sided with the king:

"If ye love wealth greater than liberty, the tranquility of servitude greater than the animating contest for freedom, go home from us in peace. We seek not your counsel, nor your arms. Crouch down and lick the hand that feeds you; May your chains set lightly upon you, and may posterity forget that ye were our countrymen."

A state of Sam Adams is located in the plaza in front of Faneuil Hall. Many walking tours given by rangers from the Boston National Historical Park begin at this spot.

Dictionary of American Biography, Vol. I