Johnny Ruiz, 33, retired from prizefighting soon after losing to James Toney at Madison Square Garden. Norman Stone, the trainer who refers to Ruiz as his son, said, "We went all the way to the heavyweight championship of the world with nobody behind us. Nobody. They can never take that away from him." - Quote from Ron Borges, Boston Globe staff writer, May 2, 2005.
Login

On this day in 2001, boxer Johnny Ruiz of Chelsea defeated Evander Holyfield in 12 rounds to become the first-ever Latino WBA heavyweight champion. Trained at a club in Somerville, Ruiz combined discipline with determination to become the country's number one amateur light heavyweight. He turned pro in 1992 at the age of 20. By the time he challenged Holyfield, he had amassed a career record of 37 wins, four losses and 27 knockouts. Winning the WBA championship made him a hero at home in Chelsea and in his native Puerto Rico, where tens of thousands of people turned out at a parade in his honor. He retired from the sport in 2010 but remains active in training young boxers in the Boston area.

Manager Norman Stone was so sure he had a future world champion in the young boxer that he mortgaged his house and convinced his sister-in-law to buy a percentage of Ruiz's fight contracts. 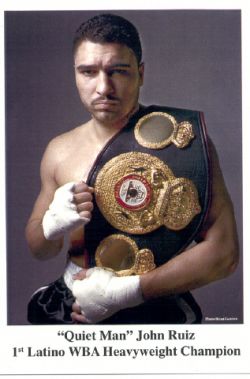 Johnny Ruiz's victory over Evander Holyfield made this humble, hardworking family man from Chelsea the first New Englander to hold the title since Brockton's Rocky Marciano.

Born in Methuen, Massachusetts, in 1972, he lived in Puerto Rico until his parents divorced when he was six. His mother brought her four children back to the Massachusetts, remarried, and settled in the Boston area.

His older brothers were amateur boxers, and when Johnny was a young teenager, his stepfather introduced him to boxing, too. After that, his life followed a daily routine of early morning runs, days at school, and training sessions at the Somerville Boxing Club. It was there that he first met the man who would become his longtime manager, Norman "Stoney" Stone.

Stone was so sure he had a future world champion in the young boxer that he mortgaged his house and convinced his sister-in-law to buy a percentage of Ruiz's fight contracts. Teaming with veteran trainer Gabe LaMarca, Stone got Ruiz into shape as a heavyweight fighter and launched his amateur career.

Johnny Ruiz declared that he would "fight whoever I have to in order to get my world-title shot."

By 1991 Ruiz had amassed a winning record of 45-4. When he defeated amateur world champion Tosten May, the upset brought Ruiz attention from the boxing world. Although he was generally considered "plodding, awkward and slow," he was ranked the top light heavyweight in the U.S at the 1992 Olympic Trials. He lost a tough match and the chance to compete in Barcelona.

Rather than wait four more years and try for the 1996 Olympics, Ruiz turned pro. He scored three knockouts before the year was out and stopped nine of his next 12 opponents in less than two rounds—an impressive feat even for experienced fighters. Still, he rarely appeared on the highlight reels and it was only in 1996 that he got any major media exposure. His bout with David Tua, an Olympic medalist from New Zealand, was heavily promoted and televised worldwide on HBO, but Tua beat a cold Ruiz badly.

Ruiz bounced back; showing heart and determination, he knocked out his next four opponents to earn the North American Boxing Federation title in 1997. Ruiz fought two commanding bouts to defend his crown before setting his sights on the next level, a vacant WBA North American heavyweight title. He captured it handily on September 19, 1998, and went on to defend his crown. Millions of television viewers watched him knock out Chicago's Mario Cawley in Madison Square Garden the following March. With his reputation improving and his confidence growing, Johnny Ruiz declared that he would "fight whoever I have to in order to get my world-title shot."

His chance came in August of 2000, when he faced the world champion Evander Holyfield in a sold-out ballroom at the Paris Hotel in Las Vegas. Ruiz came out aggressive and brought the fight to Holyfield for twelve toe-to-toe rounds. The unanimous decision in Holyfield's favor was so close and controversial that the WBA ordered a rematch.

Legendary boxing promoter Don King dubbed the March 3, 2001 rematch "Holyfield vs. Ruiz 2: The Last Word." Ruiz was more confident and did not allow Holyfield to intimidate him. He once again more than held his own. In the tenth round, Holyfield landed a blow that cost him a point and set a fire beneath Ruiz.

Getting to his feet, Ruiz landed a stunning right cross that sent Holyfield crumbling to the mat for only the second time in his career. Holyfield never fully recovered; he lost the match in a unanimous decision. Chelsea's Johnny Ruiz was the new WBA champ, making history as the first-ever Latino heavyweight champion.

Ruiz was the center of attention—from the steps of Chelsea City Hall to the White House.

In the weeks following the victory, Ruiz was the center of attention—from the steps of Chelsea City Hall to the White House. But the biggest celebration was in San Juan, Puerto Rico, where Governor Sila Calderon presented him with a gold medal of honor. At home in Chelsea, Ruiz's accomplishments inspired young Latinos to get involved in boxing.

In 2002, the Shelter Legal Services Foundation honored Johnny Ruiz for his contributions to the homeless. He has appeared at fundraisers for The Genesis Fund and The Boys and Girls Clubs of Boston, as well as hosting a Dinner With The Champ to benefit the Somerville Boxing Club, the place where it all began. Ruiz retired from the ring in 2010 with a 44-9-1 record (30 KOs). Since retiring, he has spent part of his time in the Boston area training young boxers.

The Somerville Boxing Club was founded in 1978 and was the training home for John Ruiz.

On this day in 1952, Rocky Marciano knocked out "Jersey Joe" Walcott in the 13th round to win the World Heavyweight Championship. Growing up in Brockton during the Depression, Marciano promised himself he would find...