If a Greater Metropolitan road can be the apple of a man’s eye—that’s what the new $18,000,000 Route 128 (once the old and mostly dilapidated circumferential highway around the Hub) is to admiring State Public Works Commissioner William F. Callahan.

You get his infectious enthusiasm for the nearly complete, double-barrel expressway on an inspection trip such as we have just taken with along its 22 miles from Wellesley to Lynnfield.

The trip was part of his constant energizing of builders, engineers and workmen to have 128 open to the public on Aug. 16, less than a month from now.

Throughout the tour the dynamic, quick-talking commissioner displayed as much glee as a child with a toy. He left no doubt 128 will be a Bay State showpiece. He was full of exclamations:

“At Least Massachusetts is going to have one really lovely road! I like such monuments for the public.

“There won’t be anything prettier anywhere—even out in the West!

“Billboards! The public is entitled to a little virgin territory, a little bit of real, unspoiled New England.”

Into it he has put every bit of his engineering skill and the top innovations—road-side beautification, limited access, road separations, etc.—he has helped pioneer in his record-long tenure as the state’s road-builder. . . .

The trip started at Route 9 in Wellesley. “See,” he said, smiling, “right away you get a view of the Charles River. We’ll put railing along there so no cars can go over and anyone can be injured. And look there. We’ve made all these bridges different for variety. That one’s Old Yankee facing.”

He explained that there are about 45 bridges and under- or over-passes in all.

“I don’t think there’s any other road in America with so many interesting places, even across main railroad lines, certainly not for the length of 128. . . .

We passed Norumbega Park, the reservoir. Time and again he commented. “What a view! Wait until the grass is growing. I’m a sight-seeing man. What views! See why I don’t want any signs. The Governor’s going to take a trip over it with me. He wanted the work pushed, too. He’s very interested.”

Further on: “We want to keep it natural looking, stay away from the artificial. We’re planning now for low-growing shrubs like we have down the Cape and place them along the separation and the sides. It will save mowing costs, too. See that farm over there. That’s New England. What a restful ride the public will have.”

Eventually, he said, he’s going to have turnout places for autoists to stop and enjoy the scenery—one like he’s placed on the mid-Cape road. One point he liked was where a bridge crosses Route 3 in Burlington. From there, across a saddle in the hills, you can see the Custom-house Tower and the big buildings of downtown Boston.

“This,” he exclaimed at the Reading-Wakefield line, “is the most picturesque part. Look at those ramps right through the solid ledge. It’s like up in the mountains.”

He’s anxious about the gravel scars, said it may take two or three years of completely growing to eradicate them completely. He expects 128 to bring a boom in house-building and business in its vicinity. But the state owns a 200-foot right-of-way (in some places 500-foot) and that should keep the road scenic. If towns along the route cooperate—and he said most have—it will also keep the road sign free. . . .

Completed to Braintree in 1956? I seem to recall that it ended at Rte 9 until the early 60s. I was commuting to Burlington at that time from the South Shore and it didn't turn into limited access highway until Rte. 9. Rte 128 itself went all the way to Nantasket, currently Rte 228 I believe.
Rte 128

On this day in 1951, the first segment of Route 128 was opened. By 1956, the expressway stretched 65 miles from Gloucester to Braintree. While officials were confident the road would relieve traffic in Boston and help ease travel between the region's growing suburbs, they did not foresee that Route 128 would become a destination — and an economic engine — in its own right. But it did. Real estate developers came up with their own innovation — the first modern industrial parks — that were ideal locations for the growing number of technology companies in the state. The proximity to university labs and to expanding suburban communities drew so many high tech companies to the area that Route 128 was dubbed "America's Technology Highway."

Route 128 has its roots in the 1920s, when the state Department of Public Works sought to relieve the traffic congestion that came from the rapidly growing number of cars and trucks on Boston's streets. The DPW stitched together a "Great Circumferential" or "Boston Bypass," as Route 128 was then called, out of existing two-lane roads that connected the Boston suburbs.

However, it soon became apparent that the bypass was a bypass in name only. Driving on it was almost as slow as driving through Boston itself. The state began to plan a modern limited access highway. Some construction took place in the 1930s, but it was interrupted by WW II. Work resumed in the late 1940s, and by 1956, the finished expressway provided a way for drivers to circumvent Boston traffic. But Route 128 turned out to be much more than a convenience for motorists; it quickly evolved into the nation's first "high tech corridor."

Massachusetts had a long history of technological innovation. The state could claim to be the birthplace of numerous industries, perhaps of the American industrial revolution itself. In the early 1900s, many area scientists, inventors, businessmen, and investors were focusing on the new field of electrical sciences. Research labs at Harvard and M.I.T. pioneered technologies using electrical currents, magnetic fields, and advanced circuitry. World War II provided a big boost to several Massachusetts companies doing this kind of work, including Raytheon and General Radio (later GenRad).

Two lines of experimentation proved especially fruitful and ultimately profitable: first was the commercial transistor, originally developed at Raytheon; second was the semiconductor that became an essential component of virtually every piece of modern electronics.

In the nineteenth century, industrial activity was concentrated along the state's rivers and streams, which provided power for mills and factories. Now, in the 1950s, it was a highway that acted as the magnet. Realizing that the Route 128 corridor would be a perfect place for these growing companies to locate, real estate developers began to build the first modern industrial parks. In addition to being affordable and easily accessible by car, the parks were close to university labs and, perhaps most importantly, to each other. Raytheon was already located in Waltham, almost at the midpoint of the circle Route 128 made around Boston; before long other high tech companies were moving to the area.

Soon there was a critical mass of researchers, entrepreneurs, and investors. Two lines of experimentation proved especially fruitful and ultimately profitable: first was the commercial transistor, originally developed at Raytheon; second was the semiconductor that became an essential component of virtually every piece of modern electronics. Scientists at M.I.T. and Harvard used it to build some of the world's very first computers.

When the minicomputer arrived in the 1970s and 1980s, minicomputer research and development fueled such growth in the state's economy that the media and politicians referred to "the Massachusetts Miracle." 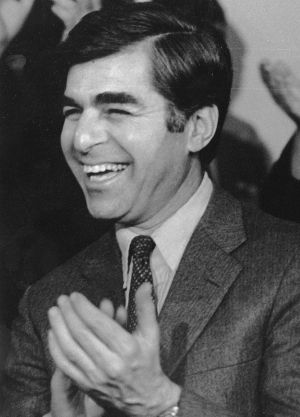 In 1957, former M.I.T. engineer Ken Olsen founded Digital Equipment Corporation in Maynard. Other computer and telecommunications companies, including Data General, GTE and Analogic followed. By the 1960s, the Route 128 corridor was becoming one of the nation's major technology centers. No one argued when, in the 1980s, Governor Michael Dukakis declared it "America's Technology Region."

When the minicomputer arrived in the 1970s and 1980s, minicomputer research and development fueled such growth in the state's economy that the media and politicians referred to "the Massachusetts Miracle." Stimulated by defense and aerospace spending, as well as increasing demand for computers for business use, the Bay State moved further and further away from its traditional reliance on heavy industry and toward a sector largely created in Massachusetts — "high tech."

Some Massachusetts companies, such as Digital and Wang, were slow to recognize the potential of desktop and personal microcomputers.

However, in the late 1980s, other parts of the country — especially northern California's "Silicon Valley" — began to eclipse Route 128 as the center of the computer industry. Some Massachusetts companies, such as Digital and Wang, were slow to recognize the potential of desktop and personal microcomputers. Overbuilding, speculation in real estate, and generally deteriorating economic conditions added to their woes. Many startups and a few well-established companies failed. "For Lease" signs sprouted along Route 128.

With the growth of new fields, especially software, biotechnology, and fiberoptics, the state's high tech sector has begun to recover. Continuing commercial and residential development of the outer suburbs — what planners call "sprawl" — ensures that Route 128 and Route 495 (the outer beltway constructed in the 1960s and 1970s) are often clogged with traffic. More than 50 years after Route 128 was built, drivers still complain that it is "the road to nowhere."

Route 128 (which now overlaps in some areas with Interstate 95) still comprises Boston's inner "beltway." Although the businesses have changed since the era of the "Technology Highway," other business have located in the many office parks visible from the roadway. An example of a recent office park is the Trade Center 128, located off of 128 in Woburn.

On this day in 2002, more than 200,000 people celebrated Mother's Day by walking across the Leonard P. Zakim-Bunker Hill Bridge, months before it was open to cars. Built as part of the country's most...

On this day in 1951, Shoppers' World in Framingham opened for business. The first suburban shopping mall in the Northeast, and only the second in the country, the complex was a revolutionary design. Anchored by...