MARCIANO REBOUNDS AFTER KNOCK OUT

Jersey Joe Walcott never saw the right glove of the hard-bitten Marciano as it came whirling out of the night. It hit him on the side of the jaw and a splatter of blood shot from an old eye wound.

The champion's face went blank. His mouth hung open and his mouthpiece dribbled slowly from between his lips. Then he sagged forward and collapsed gently on the ring floor, his forehead on the canvas, supported by his knees and elbows.

The Bull from Brockton stood over him on his shaggy pillars of legs, drenched in his own hot blood on this cool damp night.

The referee Charlie Daggert tolled the count, which you couldn't hear in the tumult that filled the auditorium. Right in the middle of his count, at precisely five, Walcott's knees and elbows refused to prop him up any longer, and he sort of went down on his face like a flat tire.

. . . And the new champion of the world was Rocco Francis Marchegiano of Brockton, Massachusetts, first one born of the Bay State since John Lawrence Sullivan 62 years earlier.

Marciano's 43 KO's translates to a knockout rate of 87.8% an extremely impressive figure. In his Sept. 23, 1952 fight with Champion Jersey Joe Walcott, Marciano was knocked down in the first round. Walcott continued to build points until the 13th round when Marciano's right cross KO'ed the great Jersey Joe. A year later in his first defense of the title he met Walcott again and KO'ed him in the first round. After his retirement Marciano was asked who was the hardest puncher he ever faced without hesitation he said, "Jersey Joe Walcott." Marciano's legacy clearly lives on with the many tributes accorded him. A few such tributes are: In 2005 the International Boxing Research Organization named him the 5th greatest heavyweight of all time. In 1977 ring Magazine named Rocky as the greastest Italian-American fighter. 2007, ESPN.com listed Marciano as number 14 on its list of the 50 Greatest Boxers of all time. He still holds the heavyweight record for longest undefeated streak. And is the only Heavyweight Champion to remian undefeated in his career. Of his 49 pro fights only 4 were held in his native Massachusetts: his first ever in Holyoke ( Lee Epperson, KO, 3/17/47); New Bedford (Pete Louthis, KO, 8/16/49); and two in Boston ( Gino Buonvino, TKO, 7/10/50, & Freddie Beshore, KO, 8/27/51).
Login

On this day in 1952, Rocky Marciano knocked out "Jersey Joe" Walcott in the 13th round to win the World Heavyweight Championship. Growing up in Brockton during the Depression, Marciano promised himself he would find a way out. When his dreams of being a big league ball player did not pan out, he turned to boxing. What he lacked in finesse, skill, and speed, he made up for in toughness, stamina, and the ability to shake off punishment. One of the hardest-hitting fighters ever, he knocked out 43 of his 46 opponents. After defending his title six times in fights that are now classics, Marciano retired at age 31 with a 49-0 record. He is still the only Heavyweight Champion to have been undefeated in his professional career.

In his first defense of the title, Rocky knocked out Walcott in just 145 seconds. It was the 11th first-round knockout of his career. 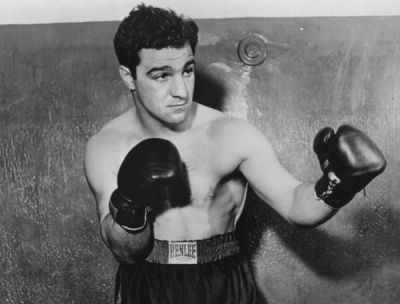 Rocco Francis Marchegiano was born on September 1, 1923, in Brockton, a shoe town 20 miles south of Boston. The oldest of six children, he spent his time playing baseball or football. He had two goals in life, one slightly more realistic than the other: not to work in a shoe factory like his father and to be a major league catcher.

In 1940 he dropped out of high school and worked a series of dead end jobs before being drafted and sent overseas in 1943. Back in the U.S. two years later, he began his amateur career by fighting in Army boxing tournaments. He had, as his biographer put it, no "formal training, no style to speak of [but] his punch was enough to ensure success."

While at home on leave in 1946, a local boxing scout told him he was too small to be a heavyweight. He should forget about being a boxer. Marciano took the discouragement in stride. It was baseball that he loved; he wanted to play for the Chicago Cubs. In 1947 he seemed within reach of his dream when he got a chance to try out as a catcher with the Cubs farm team. The dream ended when he was cut because he did not have a strong enough arm.

He had, as his biographer put it, no "formal training, no style to speak of [but] his punch was enough to ensure success."

With the door to pro baseball closed, Marciano returned to the boxing ring with new purpose. All through 1947 and 1948, he traveled throughout eastern Massachusetts, winning 26 out of 30 fights with a crude strategy that involved taking a lot of punishment and floundering awkwardly around the ring until he got an opening "to land a big one." By 1948 he had begun to win amateur titles.

At 24, he decided to turn pro. He managed to hook up with Al Weill, a well-established manager in New York, and Charley Goldman. Weill got Rocky some training matches in Providence, which was a great fight town in the late 1940s. With absolutely no finesse but with heart and grit, Rocky put together a string of knockouts. Charley Goldman began coming to Providence on Monday nights to work in Rocky's corner.

After 13 victories, 11 by knockout, Al Weill started promoting "his discovery" in New York. It was around this time that the fighter changed his name to Marciano because it was too hard for the ring announcers to pronounce Marchegiano.

Rocky Marciano's first big fight was in 1950 against Roland LaStraza. Regarded as the nation's top young heavyweight, LaStraza was considered a boxer, whereas Marciano was still seen as a brawler. On March 24, 1950, more than 13,000 crowded into Madison Square Garden to see Marciano win a split decision in a close fight.

As a boy in Brockton, Marciano had idolized Louis, listening to his fights on the radio, daydreaming about someday fighting him for the world championship.

The summer of 1951 was a watershed. Marciano used his ragged, clumsy style to knock out Rex Layner, whom the press considered the hottest heavyweight in the world. The fight marked Mariano's rise as a legitimate contender for the heavyweight crown.

Now in the limelight, to stay there meant he would have to fight another big name. Joe Louis had last won the crown in 1949; the great fighter was in need of money and a comeback. As a boy in Brockton, Marciano had idolized Louis, listening to his fights on the radio, daydreaming about someday fighting him for the world championship. In 1951 Joe Louis was an out-of-shape boxer with tired legs. Marciano was younger and in better condition. Although he was sorry to beat his one-time idol, he knocked him out in the eighth round.

By the fall of 1952, Marciano had attained a reputation as "a knockout artist supreme." He got his title fight against champion "Jersey Joe" Walcott. A 22-year veteran, Walcott was an aging but still fine boxer. A popular champion, he predicted that he would knock Rocky out. The fight was "a bookie's gold mine." Forty thousand fans packed into Philadelphia's Municipal Stadium. Another 140,000 watched the bout on the new medium of television. No one was disappointed; it is remembered as one of the best fights ever. The picture of Marciano delivering the knockout blow to the jaw of "Jersey Joe" Walcott in the 13th round is one of the most famous pictures in boxing history. After 43 fights, Marciano was now the World Heavyweight Champion.

"I think that if they were to dig up Rocky and ask him, there's absolutely no doubt in my mind that he would want the statue in Brockton. That would cap everything off."

In his first defense of the title, Rocky knocked out Walcott in just 145 seconds. It was the 11th first-round knockout of his career. He defended his title five more times — fights that rank among the greatest in boxing history —before announcing his retirement in April of 1956 at the age of 31.

The Rocky Marciano that emerged in retirement was more inscrutable and complex than the hard-charging "Brockton Blockbuster." Always afraid of falling back into poverty, Marciano became paranoid about banks, accountants, and lawyers. Generous with family and friends, he was said to "stash money everywhere." After his death, family members looked for the hidden fortune, but it has never been found.

Rocky Marciano died on August 31, 1969, the day before his 46th birthday, in a private-plane crash in a field near Newton, Iowa, far from his home town.

In the fall of 2007, the World Boxing Council voted to put a statue of Marciano in Boston. People in Brockton were outraged. There was "a love relationship between Rocky and the city of Brockton," the boxer's brother told the Boston Globe: "I think that if they were to dig up Rocky and ask him, there's absolutely no doubt in my mind that he would want the statue in Brockton. That would cap everything off." The mayors of Boston and Brockton both agreed, and the WBC reversed its decision.

A statue of Rocky Marciano was erected in Brockton on the grounds of Brockton High School in 2007. The Brockton Historical Society has an exhibit on Marciano.

Rocky Marciano. The Rock of His Times, by Russell Simpson (University of Illinois Press, 2002).