The following account of the Rockport temperance protest first ran in the Boston Traveller. The story was picked up a few days later by the New York Daily Times.

THE LIQUOR LAW OF THE WOMEN OF ROCKPORT

… in one place they smashed some thirty demijohns filled with the ardent [spirits]; at another they rolled out two barrels and stove in the heads and emptied their contents; a another place five barrels were emptied; and at still another they destroyed three. Nor was this all; they emptied several smaller places, and were not unsuccessful in destroying small quantities of the poison.

At several places they were met with the most determined resistance. One man stood in front of his building, and with a large club in his hand, threatened deadly violence to any who should enter; but not withstanding his threat, several of the more expert ones entered the back way and succeeded in rolling out five barrels of rum, brandy and gin. Considerable excitement prevailed throughout the whole scene, but public sentiment seems to approve all the ladies have done.

I would be interested to know what are the 17 towns in MA that do not allow liquor sales.
Dry Towns

Thanks for the information. I didn't even think to check the state web site.
Dry Towns

How about a brief history of how the Kennedy fortune was made?
Dry Towns

We were surprised last year to learn that some towns are "semi-dry." We learned this on a Sunday evening in a Waltham restaurant with a full bar. When the waiter offered us Coke, tea, juice and we asked about beer or wine, he said we bring in our own. But we would need to go to another town. Then we understood why we were the only customers! ------------------------- James Hayes-Bohanan Professor of Geography Bridgewater State University
Hannah Jumper/The Rockport Hatchet Gang

It was an interesting trial. Esther Tarr, one of the "instigators"/Hatchet Gang, was listed as a "termagant" on the trial record. Lemuel Shaw, Chief Justice of the Mass. Supreme Court (I think) presided. Shaw was Herman Melville's father in law.
Mass. dry towns, 2010

As of today, July 8, 2010 the offical list of dry towns in the commonwealth is nine: Alford, Chilmark, Dunstable, Gosnold, Hawley, Mt. Washington, Montgomery, West Tisbury, and Westhampton. Interestingly all of these municipalities are classified as Towns, not one city amongest them. Granted there are more towns than cities in MA, it seems urban dwellers want to remain wet. Another interesting aside is that 1/3 of the dry towns; Chilmark, Gosnold, and West Tisbury; are on islands.
Login

On this day in 1856, 200 women, some of them wielding hatchets and ranging in age from 37 to 75, rampaged through the town of Rockport destroying every container of alcohol they could find. One eyewitness recorded in his journal: "There has been exciting times a-going on here today." Weeks of planning preceded the five-hour raid. When it was over, the women had spilled hundreds of gallons of liquor. Over the next decade, alcohol sales in the town steadily declined. Rockport became one of several dozen Massachusetts towns where one could not buy liquor. Not until April 2005 would residents vote to permit inns, hotels, and restaurants to serve alcohol with meals. Eight towns in the Commonwealth are still dry today, down from 17 in 2004.

Except for a year-long interruption in the 1930s, Rockport remained a dry town until 2005. 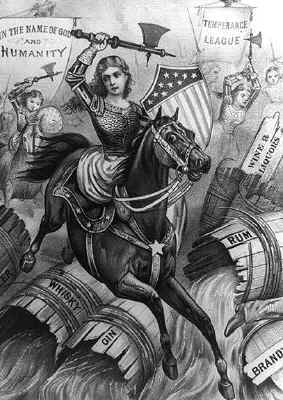 Since early colonial days, alcohol — often hard cider — was Americans' drink of choice with a meal. People steered clear of water, which they rightly believed might be contaminated. Liquor was considered virtually essential at all occasions, whether it was the ordination of a minister or a pauper's funeral (both of which would have been paid for from the town treasury). Inevitably, though, excessive alcohol consumption began to threaten social stability.

Dr. Benjamin Rush of Philadelphia (one of the signers of the Declaration of Independence) is often credited with initiating the temperance movement in the United States. "A people corrupted with strong drink cannot long be a free people," he wrote in An Inquiry into the Effects of Spirituous Liquors on the Human Body and the Mind, published in Boston in 1790. He made his point with a "Moral Thermometer," illustrating how "cider, wine or porter" could result in "cheerfulness, strength and nourishment, when taken only at meals, and in moderate quantities," while hard liquor would lead to various "vices and diseases."

New Yorkers established the country's first temperance organization. Massachusetts followed in 1813, with the formation of the Massachusetts Society for the Suppression of Intemperance (later called the Massachusetts Temperance Society).Women made up the majority of the members of this and other temperance societies. At a time when married women had no property rights — not even the right to their own wages — women were at great risk if the "dark beverage of hell" took hold of their menfolk.

At a time when married women had no property rights — not even the right to their own wages — women were at great risk if the "dark beverage of hell" took hold of their menfolk. 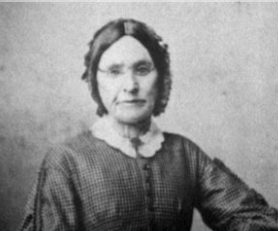 Temperance supporters collected pledges, held meetings, and lobbied legislators. They published books of songs, with titles such as "Touch Not the Cup" and "Twas the Last, Last Rumseller." Ten Nights in a Bar-Room, a novel recounting the stories of three men debilitated by alcoholism, published in Boston in 1854, sold more than a million copies, second only to Harriet Beecher Stowe's Uncle Tom's Cabin.

However strongly they favored temperance, few groups chose to protest the way the Rockport women did. In the mid-1800s, Rockport was a tiny, isolated village perched on the edge of Cape Ann. Its men made their living from the sea. At the best of times they earned barely enough to scrape by; when they spent their meager share of a catch on drink, the consequences for their families were dire.

In most traditional accounts, Harriet Jumper, a 75-year-old single woman, respected in town for her skill as a seamstress and with medicinal herbs, was the leader of the "hatchet gang" of 1856. Many meetings at which women shared their distress over alcohol abuse were held in her rooms, and she was a fierce opponent of liquor. But in fact it was five other Rockport women who were responsible for planning the infamous raid of July 8th.

They published books of songs, with titles such as "Touch Not the Cup" and "Twas the Last, Last Rumseller." 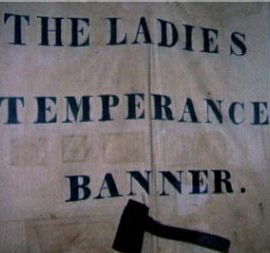 Under cover of night, a group of women marked the liquor barrels with small white crosses. At 9:00 o'clock on the morning of the 8th, wrote eyewitness Ebenezer Pool, "a large number of females of Rockport" gathered "in accordance with a secret appointment" in Dock Square. They carried hatchets beneath their shawls.

The leaders unfurled a banner, a rectangle of unbleached cotton with a black hatchet painted across it and red tassels along the bottom. "From thence," continued Pool, "they with many others who followed went to places where they suspected liquor was being kept and sold to some of their husbands and friends. On finding any keg, jug, or cask having spirituous liquor in it, they moved it into the streets and there with their hatchets broke or otherwise destroyed it."

They smashed at least 50 barrels of rum in 13 different establishments. While the owners fumed and threatened, the rest of Rockport's residents stood by and watched. No one was arrested.

"On finding any keg, jug, or cask having spirituous liquor in it, they moved it into the streets and there with their hatchets broke or otherwise destroyed it."

One outraged shop owner, Jim Brown, did file a lawsuit. The case went to trial three times. Juries, who apparently sympathized with the women, consistently ruled against Brown, only to be overturned by higher courts. Finally, in 1860, the jury verdict was upheld, and Brown was ordered to pay court costs of $346.25.

In the 1870s, the Women's Christian Temperance Union began to stage their own raids on saloons in Ohio and other parts of the country. Over the next decades, the temperance movement gained enough momentum to win an amendment to the U.S. Constitution. In 1919 the manufacture and sale of all alcoholic beverages was prohibited in the United States. Only 14 years later, Prohibition was repealed. At the tip of Cape Ann, things changed much more slowly. Except for a year-long interruption in the 1930s, Rockport remained a dry town until 2005.

On this day in 1917, the Boston Women's Municipal League held the first — and as it happened, only — Rat Day. Increasing numbers of rats infested neighborhoods ranging from the overcrowded North End to...

On this day in 1919, striking telephone operators in Massachusetts won the right to negotiate with the New England Telephone Company. The young, single women who had flooded into the industry in the early 1900s...

Edwards delivers "Sinners in the Hands of an Angry God" Sermon